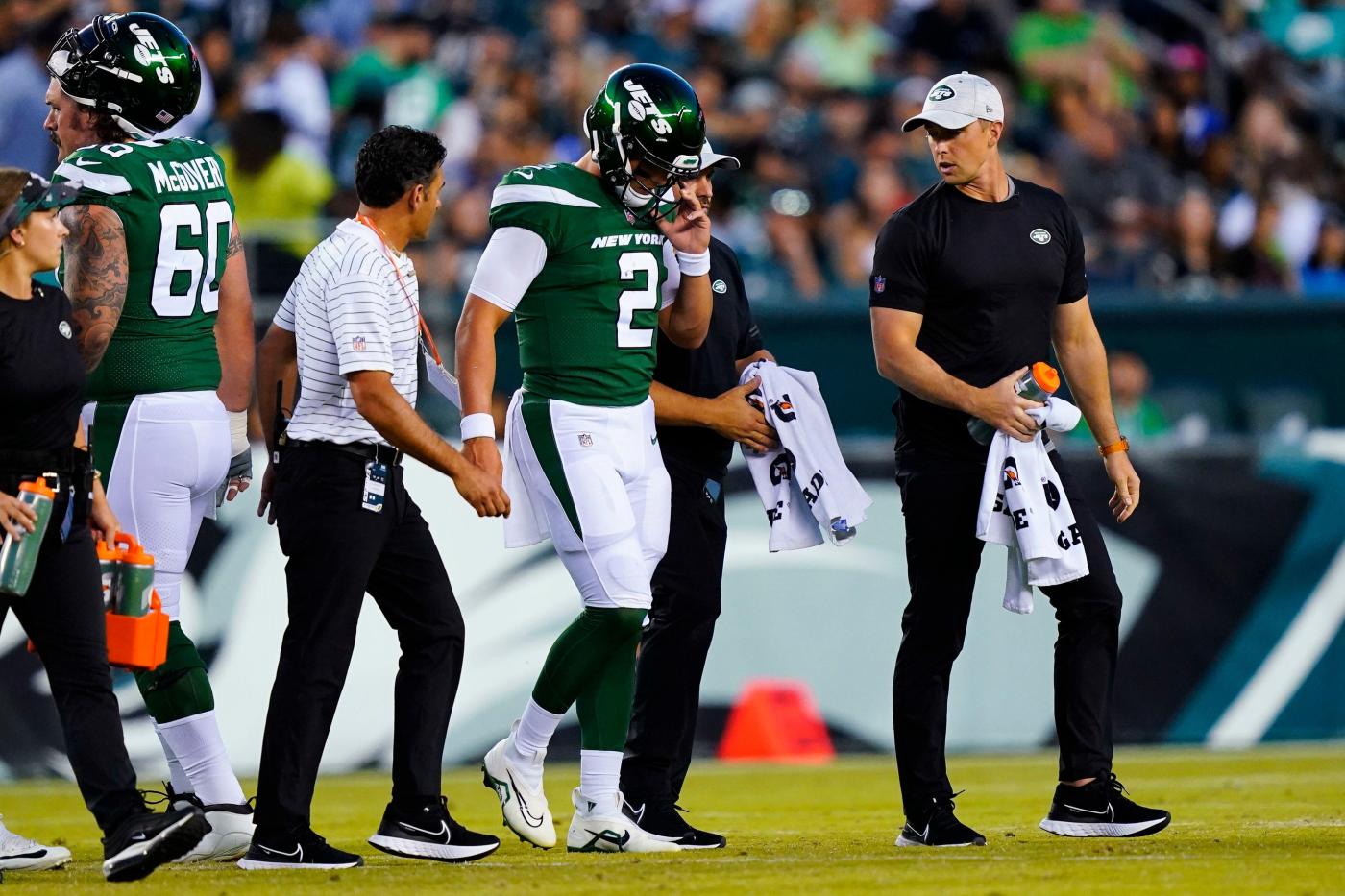 While his teammates were practicing on the opposite coast Tuesday, Zach Wilson underwent arthroscopic surgery on his right knee in Los Angeles. The surgery was done by Dr. Neal ElAttrache, who, according to a source, considered it a success as there were no surprises from the original diagnosis.

The Jets’ second-year quarterback suffered a non-contact injury Friday during the first quarter of the Jets’ preseason opener against the Philadelphia Eagles as he scrambled away from a defender trying to extend the play.

The original diagnosis suggested Wilson could be out two to four weeks as the meniscus only needed a “trim.” Wilson is also dealing with a bone bruise in the same knee.

It’s possible Wilson could play Week 1 against the Baltimore Ravens on Sept. 11, but the team won’t rush him back before he is 100% ready. Wilson is also dealing with a bone bruise in the same knee. So there’s a chance Joe Flacco could start the season opener because Wilson will need practice time and rest before returning to game action.

The Jets had no immediate comment on Wilson’s surgery as Tuesday’s media availability took place before the procedure.

Robert Saleh says it is comforting having a backup like Flacco who can fill in when needed.

“Joe has proven throughout his time that he’s a winner,” Saleh said. “I know his record (0-5) here hasn’t been that great, but he has about 1,000 yards, nine touchdowns and three interceptions in a Jets uniform.

“He has been efficient even in the Miami game where he started, threw for over 300 yards. We have all the confidence in the world Joe can get the job done.”

BECTON PLACED ON IL; JETS DOWN TO 85

Tuesday was the first of three cut-down days prior to the start of the regular season. The Jets had to trim their roster down from 90 to 85 players by 4 p.m. In addition to the cuts, right tackle Mekhi Becton was placed on injured reserve.

Placing Becton on IR means he will miss the entire 2022 season. He missed the last 16 games last year after suffering a dislocated right kneecap in the second half of the season opener vs. the Carolina Panthers. He then suffered a chip fracture to the same kneecap during a training camp practice earlier this month.

In his first three seasons in the league, the former first-round pick out of Louisville has played a total of 15 games.

The next set of cuts will come on Aug. 23, as teams will need to be down from 85 to 80 players before 4 p.m. Then Aug. 30, every NFL team must reduce its roster to no more than 53 players before the start of the regular season.

The 15th practice of training camp might have been one of the best for the Gang Green’s offense this summer.

Not only was Flacco sharp, but so were his receivers.

Flacco completed 14 of 17 passes, including 10 consecutive at one stretch. He also threw three touchdown passes along with converting a two-point conversion.

“The offense looked really good, especially tight in the red zone where things are faster,” Saleh said. “That’s where veteran experience comes in. I thought they did a really nice job.”

Denzel Mims caught a diving touchdown grab over Luq Barcoo on a pass from Chris Streverler. Corey Davis recorded a touchdown along with a two-point conversion on passes from Flacco. Braxton Berrios also caught a TD from Mike White inside the 10-yard-line.

Although Wilson is out at least two to four weeks after Tuesday’s knee surgery, the Jets offense hasn’t skipped a beat with Flacco running the first team offense.

Saleh also commended the Jets receivers for the way they performed during Tuesday’s practice.

“I love our group and it has a chance to be pretty good,” Saleh said. “There’s a lot of speed in the group with Elijah [Moore], Garrett [Wilson], Braxton [Berrios], Jeff Smith and the size of Denzel and Corey, it is a pretty cool group.

“It is just a matter of piecing together and learning how to be efficient and learning how to play in the structure of a scheme. It is all about the moment of truth, the catch point, making those contested catches and finding ways to separate in man coverage.