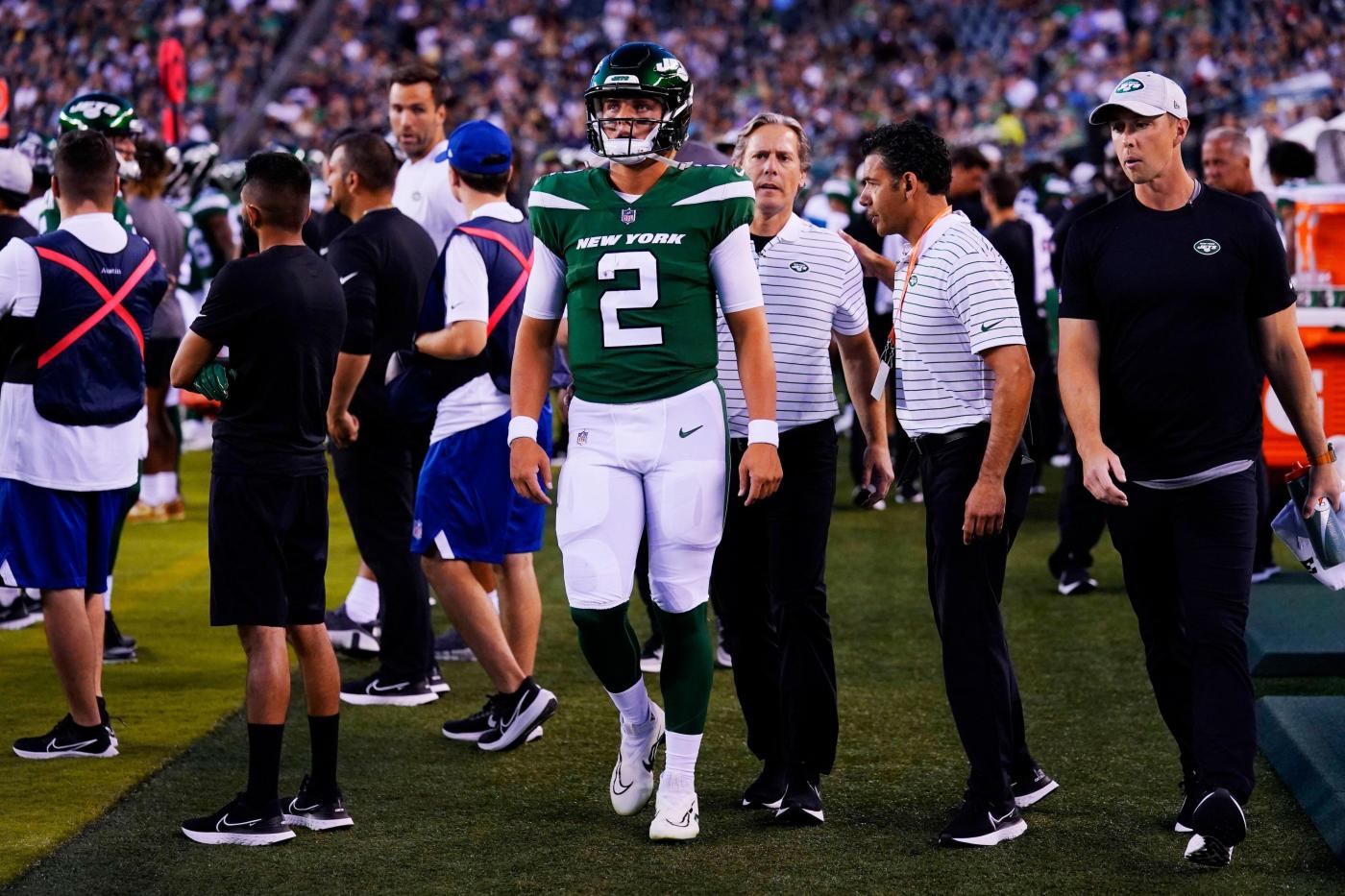 The Jets preseason started about as poorly as you can imagine. Now they wait to see the consequences.

Quarterback Zach Wilson limped off the field with a knee injury in the first quarter of Friday’s preseason contest against the Eagles, coming up lame after a scramble on his second series.

The injury was noncontact following Wilson’s juke move in the open field, adding to the fears about the potential severity. Wilson was quick to motion to the sideline and held an extended conversation with the medical staff on the field.

He then left for the locker room and was listed as doubtful to return with a right knee injury.

The scene followed an ugly first series for Wilson, who threw an interception on his third pass by telegraphing his target. Wilson, the second overall pick in 2021, finished with three completions on five attempts for 23 yards and the interception.

Wilson was only scheduled to play two series, at most, and seemed to get more comfortable before the injury. The 23-year-old completed his final two passes, including a nine-yard slant to Elijah Moore for a first down. Wilson’s scramble went for seven yards before he came up lame.

Mike White replaced Wilson against the Eagles, but Joe Flacco — who didn’t dress Friday — is considered the first backup.

Wilson, however, has been billed as the franchise quarterback of the future, with the Jets pumping up his growth after an underwhelming rookie campaign.

“I can see it right now. I can just see how much faster he’s going through his progressions, how much faster he’s taking off when something’s not there, how much more comfortable he is in this system,” offensive coordinator Mike LaFleur said during training camp. “It really shows in the meeting room, which obviously you guys don’t see every single day. Not just cause he’s answering all the right questions, just his demeanor and calmness when we are talking about the offense and a specific play. I see it, but I don’t we’ll really know until we get out there for that first Sunday.”

Now it’s harder to predict when that first Sunday will be for Wilson.

The Jets’ starting defense, meanwhile, avoided serious injury but was also underwhelming, allowing the Eagles an easy 80-yard touchdown drive in under four minutes to start the game.

Philly quarterback Jalen Hurts set the tone with a 28-yard pass on the first play, running away from Quinnen Williams’ pressure to hit receiver Quez Watkins. Hurts completed his initial four passes, but would’ve faced a fourth down if not for a bonehead late-hit penalty from linebacker Quincy Williams.