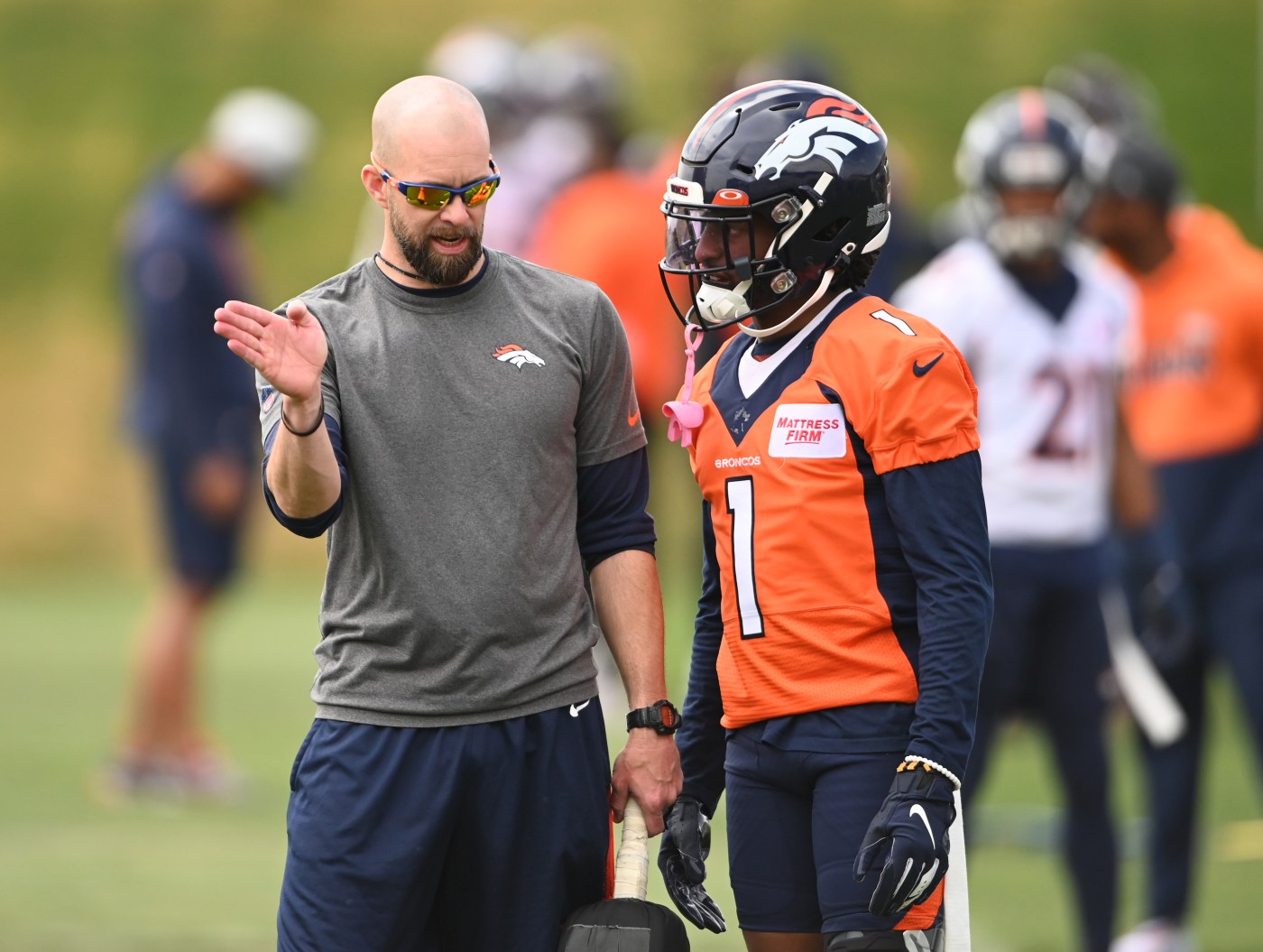 So why has Azzanni been afforded such stability in a franchise defined by recent instability? As Butch Jones puts it, in coaching, the real thing is easy to spot. And Azzanni has “it with a capital I and capital T.”

“(Beyond that), Zach has a unique quality about himself where he can be very demanding because he knows what great looks like, but also, people gravitate towards him because they can feel the passion, the knowledge and the genuine care factor that he has.”

Azzanni, 46, is a football lifer. In his fifth season with the Broncos, Azzanni was once a walk-on wideout at Central Michigan, where Jones first met him when the latter was an assistant coach. Azzanni began his coaching career as an unpaid volunteer coach for Valparaiso in 1998, then started coaching the school’s wideouts the next year. His office was in a closet, and Azzanni’s duties also included painting the field each week and acting as assistant strength coach.

After Valparaiso, Azzanni had stops at Bowling Green, CMU, Florida, Western Kentucky and Wisconsin before cementing his name in Knoxville, where he worked on Jones’ staff for four years under a variety of titles. He jumped to the NFL in 2017 as the Bears receivers coach after the organization cold-called him for the job, with Azzanni’s college reputation seamlessly translating to the pros.

“(The Bears) interviewed like eight or nine (receiver) coaches they didn’t like, but later they told me my name kept popping up and people (saying things) like, ‘You should look at this guy,’” Azzanni said. “And finally, God bless (then Bears head coach) John Fox, because he gave me my break. He said, ‘Hey, this guy’s name keeps coming up, why don’t we just interview him?’ I went in to interview and (then Bears GM) Ryan Pace offered me the job before I left the building.”

Despite his staying power, Azzanni has yet to experience a winning season through six years in the NFL.

That’s why the arrival of Hackett and quarterback Russell Wilson is a breath of fresh air for Azzanni, whose wideouts have experienced individual success during his tenure even as the offense has struggled to score points. Azzanni had a hand in developing Courtland Sutton into a Pro Bowl wideout, and helping Tim Patrick transform from undrafted free agent to roster pillar prior to his season-ending ACL tear in August.

“I’ve been waiting for this opportunity to be on a staff that’s young and vibrant, energetic and innovative,” Azzanni said. “I’ve already learned a ton from Coach Hackett. I’d love to be a head coach in the NFL some day and just watching him, watching his plan, how he goes about his business is a great experience for me. He’s efficient, super detailed, super positive. There’s no stone left unturned. It’s really refreshing because that’s how I’m wired.”

This year, Azzanni is out to prove Hackett and offensive coordinator Justin Outten made the right call in retaining him. When Azzanni found out about the hiring of Hackett, a coach he previously had no connection to, he figured his days leading the Broncos’ receivers were likely over. But Azzanni was the first person to interview for the job, and the Broncos gave it to him less than a week later.

Sutton said he was “ecstatic” about Azzanni’s return, but his reaction didn’t quite match that of Azzanni’s four daughters, who range in age from five to 15 and were overjoyed to find out they wouldn’t need to move.

“We were over at the neighbors when my phone rang and it was Hackett offering me the job,” Azzanni said. “I called my kids and told them the news and they came out into the street and were just running around, yelling and so excited. That’s the life of a coach’s kid.”

Azzanni realizes expectations for his group have been elevated with a likely future Hall of Famer at quarterback. With Patrick sidelined, Sutton’s leadership is even more critical. There’s also the challenge of getting more production out of Jerry Jeudy (the 2020 first-round pick had zero touchdowns in 2021) and KJ Hamler (returning from long-term knee/hip injuries).

“With Tim out, everybody’s got to step up,” Azzanni said. “No. 3 being out there helps to raise the standard of everyone around the room, including Jerry. And yeah, Jerry’s got a lot to prove this year. He knows it. We all know it.”

Azzanni’s blunt assessment of Jeudy is where the “self-made coach,” as Jones labeled him, stands out. He can simultaneously be hyper-critical of his receivers, while also getting them to buy into his message without taking those harsh assessments personally. It’s where the “standard over feelings” mantra comes in within the Broncos wideout room, where no player is safe from Azzanni’s punctilious eye.

“He coaches us really hard, but that’s helped me develop rapidly from OTAs until now,” said wideout Jalen Virgil, who made the team as an undrafted rookie. “He was on me all the time at the first, but since it’s always ‘standard over feelings’ with him, that helps us weed out being emotional about getting coached up and just focus on getting better.”

For Sutton, he knows that his production and paydays (he and Patrick signed four- and three-year deals last November, respectively) are tied to Azzanni, just as Azzanni’s coaching pedigree is tied to them. But Sutton, like Jones, insists the coach’s unusual tenure in Denver is about more than the talent in the receiver room.

“Obviously, for me to have success and then him bringing in Jerry and KJ and coaching those guys up and those guys having some early success, that all looks good on him,” Sutton said. “The same standard he holds us to, he holds himself to. Us having some success probably contributed to (him returning under Hackett), but it’s more him. It’s the way that he carries himself. It’s the way that he prepares himself and his detail-oriented game-planning.”

Azzanni’s obsession over the minutiae of the sport has a habit of paying off in critical moments. Jones recalled Tennessee’s Hail Mary victory over Georgia in 2016, when wideout Jauan Jennings hauled in a touchdown pass from quarterback Josh Dobbs as time expired to send the Vols to an instant-classic win.

On that play, Tennessee originally came out in a trips formation with Jennings lined up on the weak side of the field, isolated by himself. But after Georgia saw the coverage and called timeout, Azzanni made the decision to move Jennings in the formation, to the opposite side of the field from the X to the Z, in order to have a better chance at coming down with the jump ball.

“Because Georgia had a safety over the top, Zach quickly put (Jennings) in as the jumper in the middle of the field (at the end of Jennings’ route),” Jones said. “Jauan hadn’t played (Z) at all really, but Zach quickly and calmly coached him up… He had total command of that moment and of the magnitude of that moment.

“Zach knew what he wanted and what he needed to do in the moment with the game on the line. That was one of many examples… and I think he’s just reaching the beginning of what he can do.”