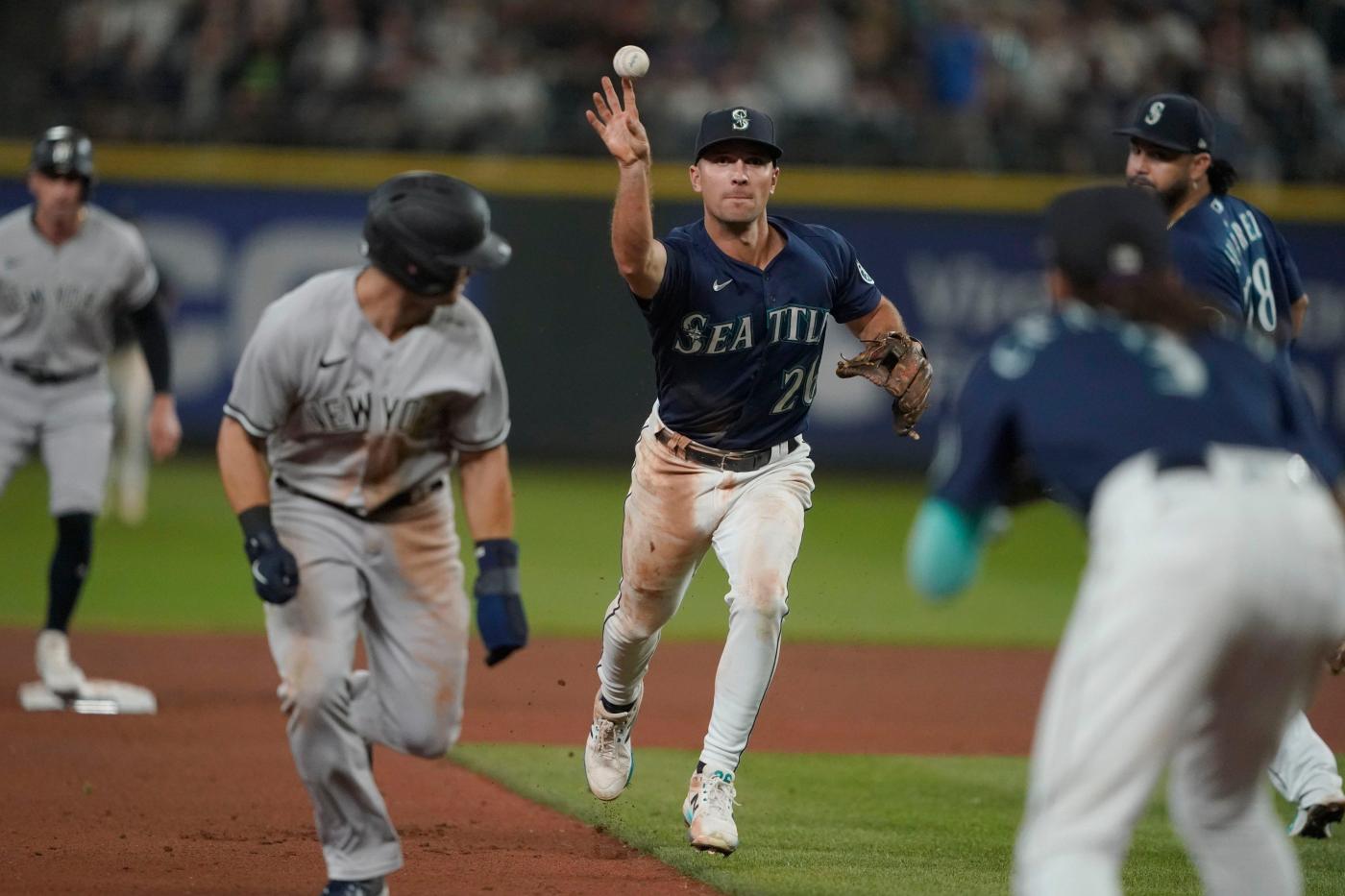 SEATTLE — Little-used backup catcher Luis Torrens lined a single to right field in the bottom of the 13th inning to end what had been a tremendous pitching duel between aces Luis Castillo and Gerrit Cole. Torrens’ single off Jonathan Loaisiga with the bases loaded gave the Mariners a 1-0 win over the Yankees at T-Mobile Park.

Due to the Yankees’ confounding baserunning mistakes, Aaron Judge did not get his first at-bat in extra innings until the 13th. The Mariners’ intentionally walked him with DJ LeMahieu, the ghost runner, at second. Marwin Gonzalez drew a walk from Matt Brash to load the bases. Gleyber Torres struck out and Miguel Andujar grounded out to the shortstop.

As the ghost runner in the top of the 12th, Jose Trevino got tagged out going to third on Isiah Kiner-Falefa’s infield groundball to shortstop. Kiner-Falefa tried to advance to second and was called out going out of the base path trying to avoid the tag.

In the bottom of the 12th, Ty France’s ground ball advanced the ghost-runner to third base with two outs. Lou Trivino walked Mitch Haniger and Jake Lamb to load the bases and face Eugenio Suarez. Trivino went to a full count before he got the slugger on a 97-mile-an-hour sinker to keep the Yankees alive.

J.P. Crawford laid a bunt down on the third-base line to advance ghost runner Cal Raleigh to third leading off the 11th. Wandy Peralta intentionally walked Sam Haggerty and the Mariners sent Carlos Santana up to pinch hit. Peralta fielded a comebacker and fired to second where Gleyber Torres turned the double play, firing to first to get Santana.

Andrew Benintendi, attempting to steal third after Josh Donaldson was hit by a pitch to lead off the 10th, was caught in a rundown. Gleyber Torres grounded out to the pitcher, leaving pinch runner Tim Locastro, who had advanced in the rundown, at second. Former Met Paul Sewald struck out Andujar to end the inning.

In the 11th, with nobody out, Miguel Andujar froze on Aaron Hicks’ lineout to second and was doubled off the base.

The Yankees had cleaned up their baserunning after a disastrous 2021. They went into Tuesday night’s game with 31 outs on bases, one below the league average. So much for that.

The antics on the basepaths overshadowed what had been a tremendous pitching show.

Last week, the right-hander was making his Mariners debut after having been acquired from the Reds. He went 6.2 innings, allowed three earned runs on five hits, struck out eight and walked three.

Tuesday night, the one that got away from the Yankees at the trade deadline, was even better in his second start with the Mariners and his first in Seattle. Castillo held the Yankees scoreless over eight innings, scattering three hits, walking two and striking out seven. Castillo got 19 swings and misses.

Gerrit Cole scattered four hits and struck out eight in seven innings. Cole got nine swings and misses, four on his fastball.

It was like night and day from Cole’s last start.

The last time out, the Mariners smoked Cole, hammering him for six runs in the first inning. He gave up three homers in that first and was close to being pulled, but got out of the inning and then pitched five more scoreless.

“He just couldn’t get settled in that first inning,” Yankees manager Aaron Boone said. “From getting those fastball established, getting in the strike zone, getting behind the eight ball and then obviously got hurt with the long ball in that first inning. But, the next five innings we’re about as good as you could have. So hopefully it’s building off the next five innings where he ends up going six innings in that game and continues to learn and grow from different bumps that you have along the way and hopefully he can go out and be more in line with what we saw the rest of that game.”

Maybe in an attempt to make him more comfortable, Boone re-paired him with Jose Trevino behind the plate. In 14 previous starts with Trevino, Cole had a 2.74 ERA. Their game plan featured a lot more fastballs early one, compared to his approach the last time out, which was heavier with offspeed pitches early.

Cole used his fastball Cole settled in early on Tuesday night. He cruised through the first time through the lineup, retiring the first seven batters he faced on the night. Sam Haggerty singled in the third to break up Cole’s attempt at a no-hitter. Trevino took care of that, however, throwing out the right fielder as he tried to steal second.

Defense was definitely part of Cole’s success this time around, because there were some loud out.

The Yankees had four baserunners against Castillo. Benintendi singled and stole second in the first. Judge led off the fourth with a single and he walked to lead off the seventh, but was thrown out trying to steal second for the third out — the first of a night of bad base running. In the eighth, Miguel Andujar, who made his way from Scranton, hit a one-out bloop single to left field. Aaron Hicks drew a seven-pitch walk. Jose Trevino grounded out to third and Isiah Kiner-Falefa grounded out to second to end the threat.

Aroldis Chapman worked around a single for a scoreless eighth inning.

Clay Holmes, who has allowed 11 earned runs in his last 15.2 innings pitched over 17 games, clipped Adam Frazier’s foot to put the lead-off hitter/winning run on base in the ninth. Gleyber Torres made one of the several tremendous defensive plays that saved the Yankees Tuesday night. He made an aggressive grab of Ty France’s ground ball, tagged Frazier and threw out France. Holmes coaxed a harmless ground-ball out to end the inning.