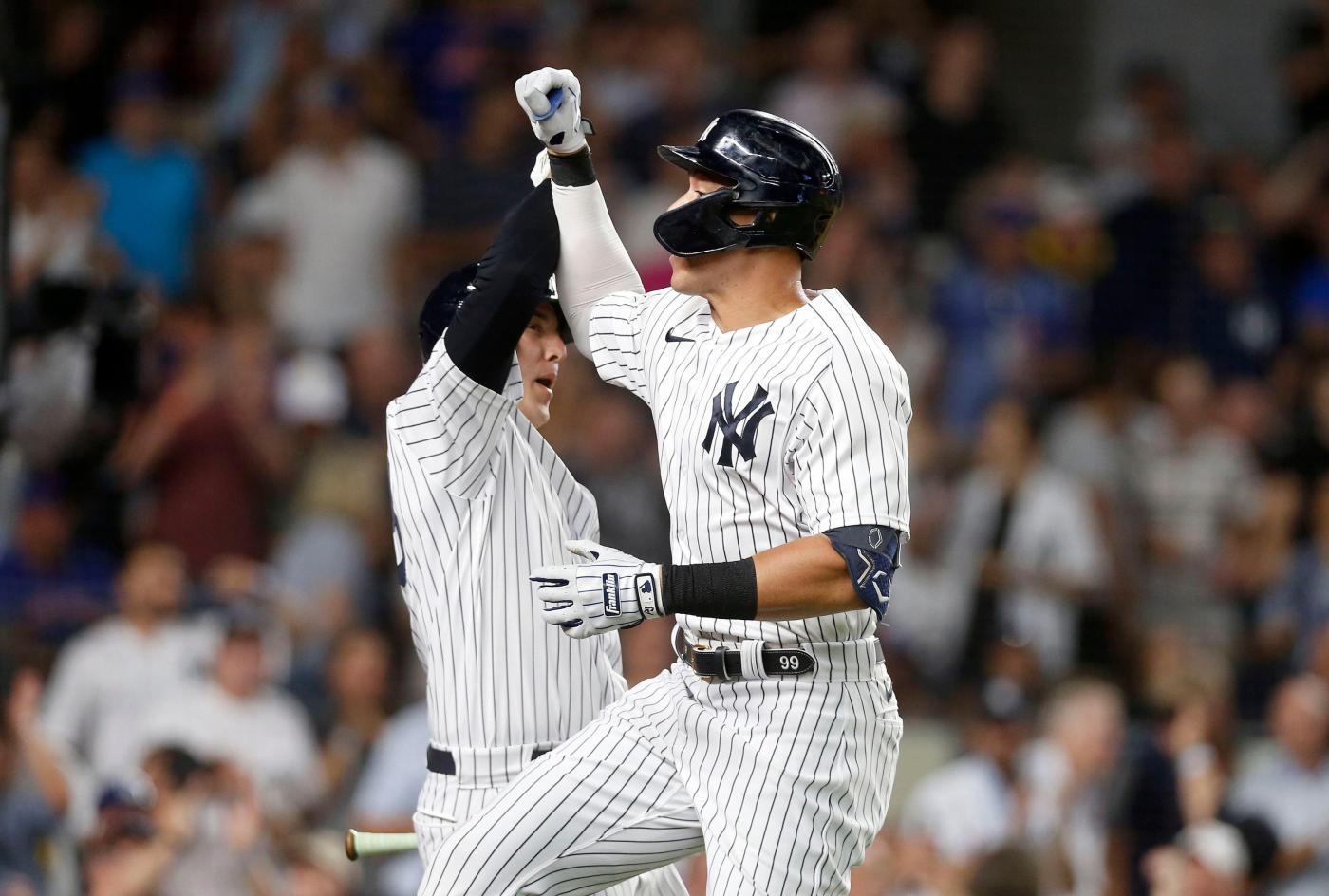 Sometimes a baseball game makes a lot of sense.

A clean scorecard and box score can tell the whole story, showing exactly what happened and making it abundantly clear why one team beat the other.

Then sometimes you get a game like the one the Yankees and Mets played on Tuesday night, where a base-running blunder and bizarre defensive choice made up one of the biggest plays of the game, catcher’s interference makes an appearance, Pete Alonso breaks a bat over his knee in frustration (and swears after the game that it didn’t hurt) and two of the singles in the game-winning rally were anything but well-struck.

“We just couldn’t catch a break with a lot of balls,” Buck Showalter said.

The Yankees won 4-2 thanks to some of that extreme batted-ball luck, a few instances of clutch defense and an abnormally long relief appearance to save the day. The rambunctious crowd at Yankee Stadium loved it, and when asked about those full-throated hooligans who helped will the Yankees to victory, the Mets’ manager had a sassy response.

“It was almost as good as ours that we had at Citi Field.”

Everything started normally enough, with the first three innings full of zeroes and Mets’ pitcher Taijuan Walker getting over his back issues to retire each of the Yankees’ first nine hitters. Then Aaron Judge went yard in the fourth inning, one of the more regular occurrences in baseball these days. Judge is now sitting on 48 home runs and has a good chance to get to 50 before the calendar flips to September.

“It was supposed to be a sinker in,” Walker said of the pitch that Judge walloped. “It was well located, but he hits fastballs really well. Just wasn’t the right pitch. He just covers the ball well, up [and] down.”

The fifth inning gave the Yankees’ youngest player — Oswaldo Cabrera — a chance to seize the Subway Series moment. After Brett Baty reached on catcher’s interference, Tomas Nido laid down his 11th sacrifice bunt of the season (he’d add one more later to extend his MLB lead in that category.) That put two runners in scoring position for Starling Marte, who whapped a single into right field, directly at a charging Cabrera.

Cabrera, who has started at four different positions in his first seven games, looked every bit like a right fielder here. He threw an absolute seed to home plate to cut down Baty, a fellow 1999 baby, and prevent the Mets from tying the game. Then things entered a much stranger stage.

The play that tied the game for the Mets one inning later can best be described as wonderfully stupid. Jeff McNeil laced a double to right field, setting Alonso on a dead sprint toward home. Alonso, who Statcast has in the 14th percentile of sprint speed, may have gotten going a little too fast. He appeared to blow a tire coming around third, getting caught in between the base and his final destination. McNeil, anticipating a throw home, had already made a wide turn around second base too.

“I didn’t hit the bag that well rounding third,” Alonso explained. “It caused me to stumble a little bit, but it worked out for the best.”

Yankee second baseman Gleyber Torres, who received the relay throw from the outfield, never seemed to notice that Alonso was hung out to dry. Instead, he made a beeline for second base to try and tag McNeil, ending up with no outs and the Mets pulling even.

As the teams headed into the bottom of the seventh deadlocked at two, it was Joely Rodriguez time. The object of so much bullpen consternation in Queens, Rodriguez blew the lead again, but it wasn’t entirely his fault. Cabrera led off with a single and scooted to second on Isiah Kiner-Falefa’s perfectly-executed bunt. Then a lazy fly ball to right field by Jose Trevino that should have been the second out fell between three Mets, a harbinger of the eventual loss.

One batter later, Andrew Benintendi hit a harmless-looking ground ball that got through the infield, and the Yankees had the lead. A few feet in either direction and the Mets might have had a fielder there, but like Trevino’s dunker into shallow right, nobody could get a glove on it when they needed to most.

An insurance RBI single by Judge wrapped things up, as the Mets flailed away at Yankees’ long reliever Clarke Schmidt for three innings. Schmidt had two three-inning saves earlier this year, but both were in blowouts. But when Yankee manager Aaron Boone trusted him in a tight one on Tuesday, and then tried to let him cook all the way to the end for a rare 10-out save, this game had one more thing that might not get seen again all season.

Instead it was Wandy Peralta, called in to relieve Schmidt and face Francisco Lindor with the bases loaded and two outs in the ninth inning, who successfully converted an also rare one-out save.

On Tuesday night, those once-in-a-blue-moon oddities were surprisingly common. For the Mets, Wednesday provides another oddity: just their second off day since July 29.

“It’s going to be nice, I’m not going to lie to you,” Alonso said with a smile.