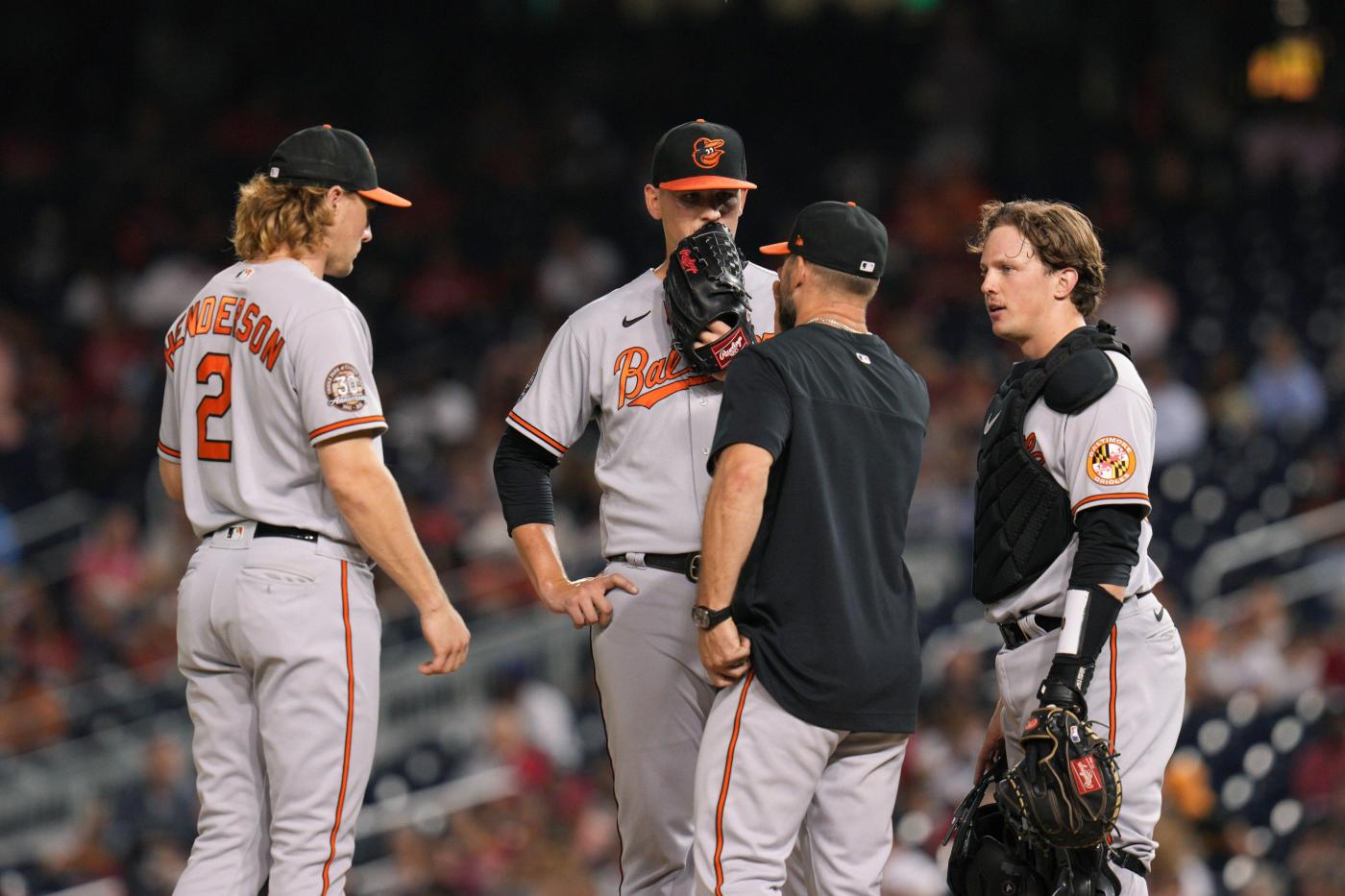 More so than the speed Gunnar Henderson showed as he rounded the bases, and more so than the ball slipping out of left fielder César Hernández’s grasp on his throw, perhaps the most surprising thing about the play that broke Wednesday night’s game open was that Henderson never lost his helmet.

In the Orioles rookie’s first marquee moment in the major leagues, that helmet gave way to his blonde locks, either by the sheer force of his swing or the speed of his legs. But in the seventh inning at Nationals Park on Wednesday, Henderson chugged and the helmet remained — all the way from the batter’s box, around first, second and third, and into home plate about 15 seconds later.

Baltimore needed a spark against Washington, having staggered through six innings against left-hander Patrick Corbin. Against the Nationals’ bullpen, however, the Orioles immediately broke through, with Henderson’s hard-hit triple down the third base line propelling Baltimore to a 6-2 win to keep pace in the race toward the final American League wild-card spot. With the victory, the Orioles are four games back of the Tampa Bay Rays heading into a three-game series with the Toronto Blue Jays, although the Rays own the tiebreaker over Baltimore.

It was Henderson’s groundout in the second inning that got Baltimore on the board early after it loaded the bases. The Orioles only managed one run after producing three straight singles against Corbin, who settled in and didn’t allow another hit until Austin Hays’ double to begin the sixth.

But in the seventh, with right-hander Mason Thompson on the mound, manager Brandon Hyde inserted outfielder Cedric Mullins as a pinch hitter. He promptly singled, moving Jesús Aguilar to second. That brought Henderson up, and his liner down the line off Thompson sent Henderson off to the races.

Henderson ran from home plate to third base in 11.12 seconds, according to MLB.com, the third fastest home-to-third time this season. When the ball squirted out of Hernández’s hand as he attempted to throw it in, Henderson could jaunt home to complete his Little League homer.

The sudden burst of energy ignited the Orioles-heavy crowd at Nationals Park, who chanted “Let’s go O’s” after shortstop Jorge Mateo sent Thompson’s next pitch over the left field fence. And in the eighth, Henderson’s blast off the right-field fence plated Mullins for his career-high fourth RBI.

The offensive output cleared the line for right-hander Tyler Wells, who allowed two solo homers and nothing else, and it positioned right-hander Austin Voth for the win against his former club.

The boost Henderson has given Baltimore has been apparent on an everyday basis and through memorable moments. In his second major league at-bat, he clobbered a homer for his first hit — and lost his helmet. That helmet also left his head during his ninth-inning single in that game. Henderson has provided a game-winning hit against the Red Sox and now a double and triple Wednesday against Washington.

As the youngest position player in baseball, Henderson owns a .328 batting average with an .890 OPS. Even as Mullins found himself out of the starting lineup against a left-handed starter for the fifth straight time, Henderson batted eighth despite the left-on-left matchup.

Mullins later entered against the right-handed Nationals relievers, singling twice to provide a runner on base for Henderson. But Henderson’s presence throughout the evening shows Hyde’s willingness to give the burgeoning star those opportunities, even through both at-bats against Corbin ended in groundouts.