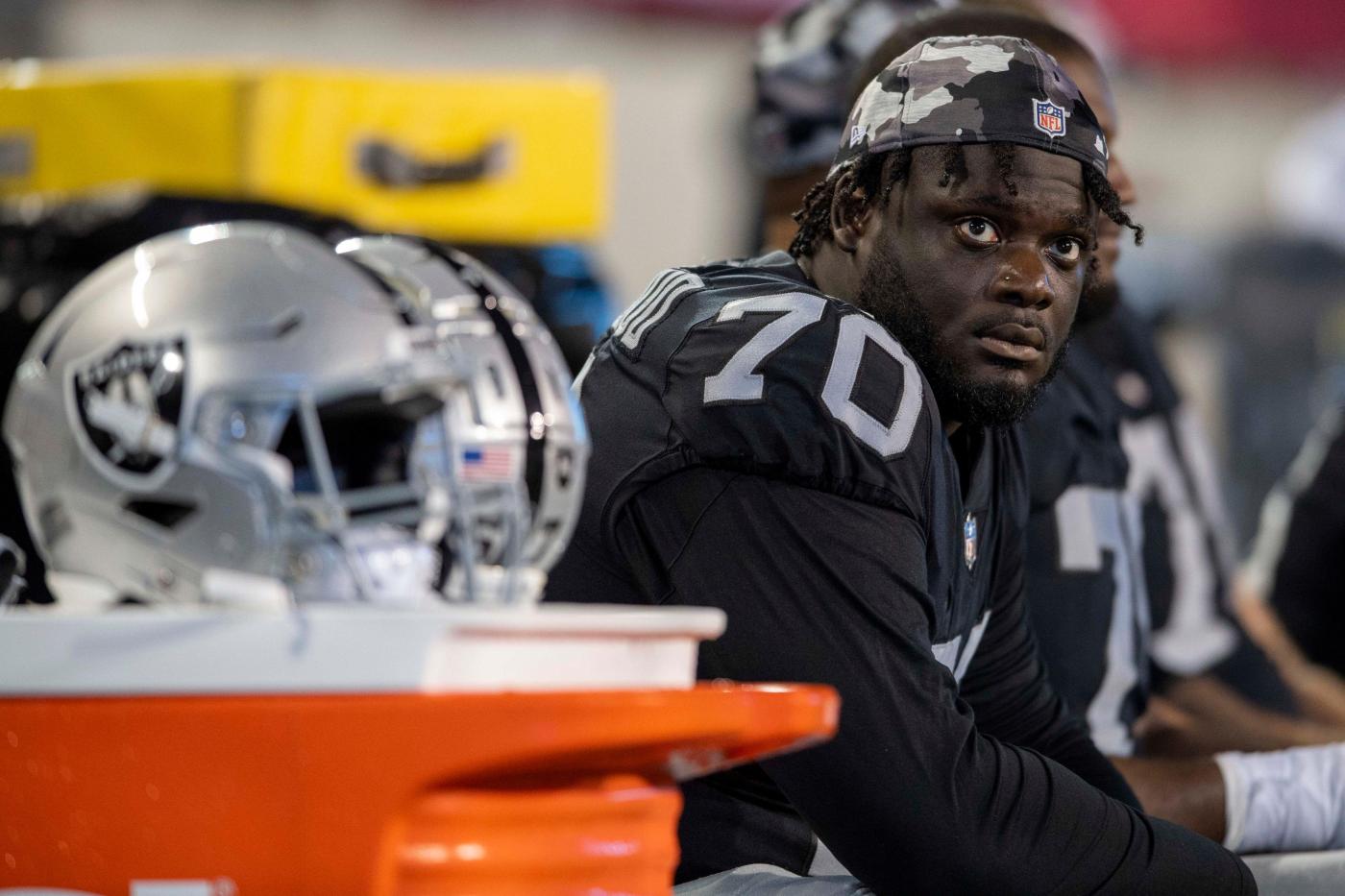 As Alex Leatherwood stood in an unfamiliar locker room at Halas Hall, the newest Chicago Bears offensive lineman was asked to describe his previous 48 hours.

The former first-round pick was cut Tuesday by the Las Vegas Raiders. He was claimed by the Bears on Wednesday and scheduled a flight to Chicago that arrived about midnight. And he completed his first Bears practice with reps at right tackle by early Thursday afternoon.

It was all so new he still was trying to learn his teammates’ names.

But the 6-foot-5, 312-pound lineman was ready to embrace the opportunity instead of dwelling on any negative emotions he might have about the Raiders cutting ties with him after just one season.

“It’s not really my concern,” Leatherwood said when asked about the bad taste of his Las Vegas exit. “I’m more concerned with the future and the things that I’ve got going on here now.”

What Leatherwood becomes for the Bears is just another question on an offensive line loaded with them.

In a news conference addressing many topics Thursday, general manager Ryan Poles said Leatherwood can play guard and tackle and left open the possibility of either option. The Raiders, who surprised by drafting Leatherwood 17th overall out of Alabama in 2021, moved him inside after early-season struggles at tackle, but he still started all 18 games.

Poles said he was eager to check him out on the field in person.

“Talented player, physically gifted for sure. Prototype in his size and movement,” Poles said. “And then in terms of success with him here, we all believe in player development, and we’ve put pieces in place to allow players to be their best selves. So we’re going to approach that in many different ways, and we’re going to give him an opportunity to develop and grow.

“Forget the draft pick thing. That’s over. So let’s start from the ground floor. Let’s build you up and take your time. We want to put him in the best position to succeed.”

Leatherwood gives the Bears another option in a group that even Poles seemed to acknowledge has a lot of uncertainty around it as they head into a Week 1 matchup against a San Francisco 49ers defense that will send Nick Bosa — the edge rusher who had 15½ sacks last season — hurtling toward Bears quarterback Justin Fields.

Braxton Jones, the fifth-round pick out of FCS Southern Utah, has impressed Poles by how fast he has developed at left tackle, but Poles said the Bears need to see how he handles the league’s top pass rushers — and the inevitable bumps that will come with that.

Teven Jenkins has been at right guard for just a few weeks. Center Lucas Patrick has been out almost all of training camp with a right hand injury, and Sam Mustipher has filled in. And Larry Borom is trying to develop more consistency at right tackle after eight starts in his rookie season.

“Through preseason they have gotten better,” Poles said. “That’s the preseason. We’re going to see when the lights come on. We’ll continue to adjust and do everything we can to make that unit better and everything around it better.”

While there are numerous questions, Poles at least has assembled a cast of linemen with versatility and choices, with veteran Riley Reiff joining Leatherwood as potential replacements should others not work out.

Jenkins was among the biggest questions during training camp, with NFL Network still floating his name as a trade candidate as recent as Tuesday even though the move from tackle to right guard seemed to be a positive development. Jenkins admitted later that night he was anxious about possibly being dealt and thought “it could still happen at any moment.”

And there are still unknowns about the combination of center and right guard when Patrick returns from injury as soon as next week.

But Poles said Thursday Jenkins shouldn’t be worried about a trade.

“ I had a good conversation with him and I told him how proud I was of him,” Poles said. “It’s about building the best five. We have a good five with him at guard. So I think it’s good for us to have Teven at guard right now.”

Whether Leatherwood eventually makes enough strides to replace Jenkins or Borom remains to be seen. Right now, Leatherwood said he isn’t focusing on a timeline and is keeping an open mind about what might happen.

“Just all depends on how long it takes to get the language and stuff like that,” Leatherwood said. “It’s all ball at the end of the day, but it’s just about the terminology, just getting used to it. Trying to be a student.”

After a chaotic few days, Leatherwood will have some time to settle in. The Bears have a three-day weekend before resuming Week 1 practice Monday.

But in the long run, Leatherwood believes he will be a good fit.

“To be honest, I feel like I’ll fit well,” Leatherwood said. “I’m strong and fast. I feel like no matter what it is, I’ll just give my best effort to do it. Doesn’t matter what the scheme is.”