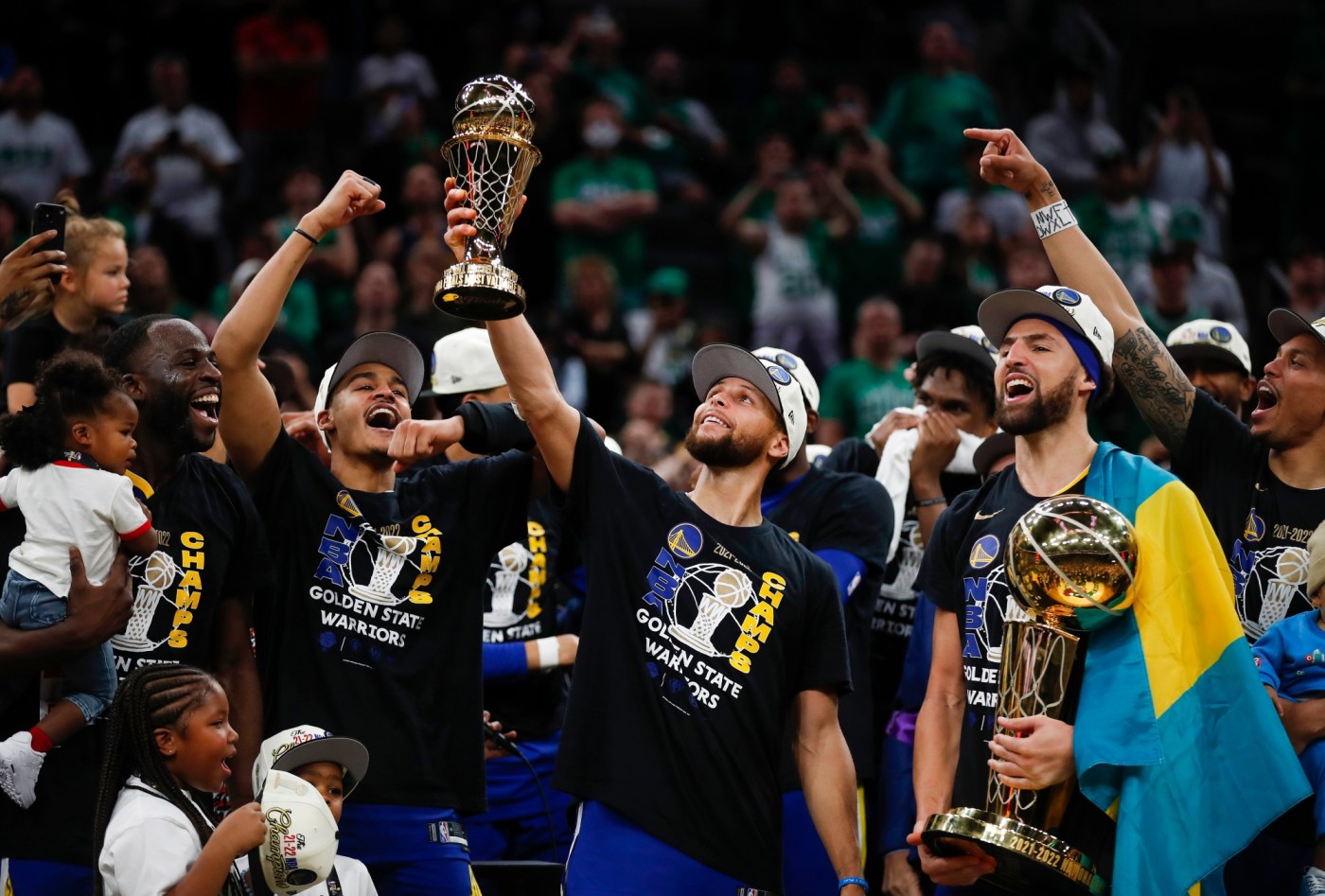 BOSTON – After missing the playoffs in back-to-back seasons, the Warriors’ championship window appeared to be shutting.

But Stephen Curry and his teammates proved Thursday night they had no plans to let it close.

The Warriors further cemented the team’s dynasty and built upon Curry’s legacy as one of the NBA’s all-time greatest players as Golden State reclaimed its spot atop of the league, beating the Boston Celtics 103-90 to win their fourth title in eight years.

Moments after hoisting the Larry O’Brien Trophy, Curry added the one piece of hardware that eluded him to his collection. The Warriors’ superstar was named the Bill Russell NBA Finals MVP.

The Warriors have struggled with close-out games this postseason.

Not in Game 6 of the NBA Finals.

The regular cast showed up to impress at TD Garden as if no time had passed. Curry scored 34 points, Klay Thompson added 12 and Draymond Green played one of the best playoff games of his career as the Warriors cruised to a victory to notch the franchise’s fifth championship since moving to the Bay Area in 1962 and seventh overall.

After the Celtics jumped to an early 12-point lead, the Warriors sucked the life out of TD Garden, scoring 21 unanswered points – with five 3-pointers – to take a 37-22 lead with 10:13 left in the second quarter.

Curry drained a 3-pointer about midway through the third quarter and pointed at his ring finger, foreshadowing the latest piece of jewelry he’d be adding to his collection.

The Celtics, led by Jaylen Brown and Al Horford, showed signs of life in the second half and cut the Warriors’ lead down to eight with under six minutes to play in the fourth quarter. But Golden State held on.

Much of the conversation entering the series was how the Warriors would be able to score against the league-best defense. But it was Golden State’s defense that shined, holding the Celtics to fewer than 100 points four times in the Finals.

In Game 6, Golden State deployed an air-raid attack from deep, with all of its starters – including Green, who also had 12 rebounds, eight assists, two steals and two blocks – making two or more 3-pointers. Golden State made 19 3s at a 41.3% clip, while Boston went 11-for-28 from downtown.

But it wasn’t just the Warriors’ mainstays who made an impact. Newer faces, like Andrew Wiggins, Jordan Poole and Gary Payton II have been pivotal all postseason and came in clutch in Game 6. Andrew Wiggins finished with 18 points, six rebounds, five assists, four steals and three blocks, while helping shut down Jayson Tatum, limiting the Celtics star to just 13 points.

Poole added 15 and made three 3s, coming off the bench to spark a 21-0 stretch that marked the longest unanswered run in a NBA Finals game in the last 50 years.

Nothing about this year’s championship run came easy – it never does. But this might’ve been the most challenging and perhaps the most improbable of the now four titles won under head coach Steve Kerr.

After five straight berths in the NBA Finals followed by back-to-back seasons where Warriors missed the playoffs, there was significant doubt surrounding Golden State since the beginning of the season. ESPN projected the Warriors to be a middling team in the preseason; FiveThirtyEight estimated they would win only 37 games. But the Warriors quickly silenced their skeptics after a hot start to the campaign. They were the league’s top team at the turn of the year, despite their roster never being at full strength.

This season had some serious highs:

But it also was strained with hardships.

As the season went on, injuries piled up. The Warriors’ hot start was extinguished as the team endured sluggish stretches of play, including without Curry who missed games at the end of the regular season with a foot injury. Golden State finished in third place in the Western Conference with a 53-29 record.

What the Warriors could be — contenders or pretenders — was still a mystery at the start of the playoffs. Curry, Thompson and Draymond Green played only 11 minutes together in the regular season. James Wiseman, the team’s 2020 top pick, didn’t play a single minute this season, sidelined with a persnickety knee injury.

But the Warriors put a championship contender together on the fly, beating the Nuggets in five games, the Grizzlies in six and the Mavericks in five to return to the NBA Finals for the sixth time in eight years.

“This one hits different for sure, just knowing what the last three years have meant, what it’s been like from injuries to changing of the guard in the rosters, Wiggs coming through, our young guys carrying the belief that we could get back to this stage and win, even if it didn’t make sense to anybody when we said it,” Curry said. “And now we got four championships. Me, Dray, Klay, and Andre [Iguodala], we finally got that bad boy. It’s special. It’s special. Just all the work that went into it, the faith and belief and everybody in that locker room that’s getting to spray champagne around the locker room, everybody mattered in that process.”

With the dynastic core aging and a new young group emerging, the Warriors will do their best to maintain the dominance that has defined this team over the last eight years. But those conversations can wait until after a well-deserved celebration.

For now, the team – now winners of seven titles, surpassing the Bulls as the third most in the NBA – will savor this euphoric moment where persistence and excellence led them back to the mountain top.

“I’m not sure” what’s next, Green said, “I don’t like to put a number on things… We gonna get them until the wheels fall off. That’s our goal, to compete at this level every year.”