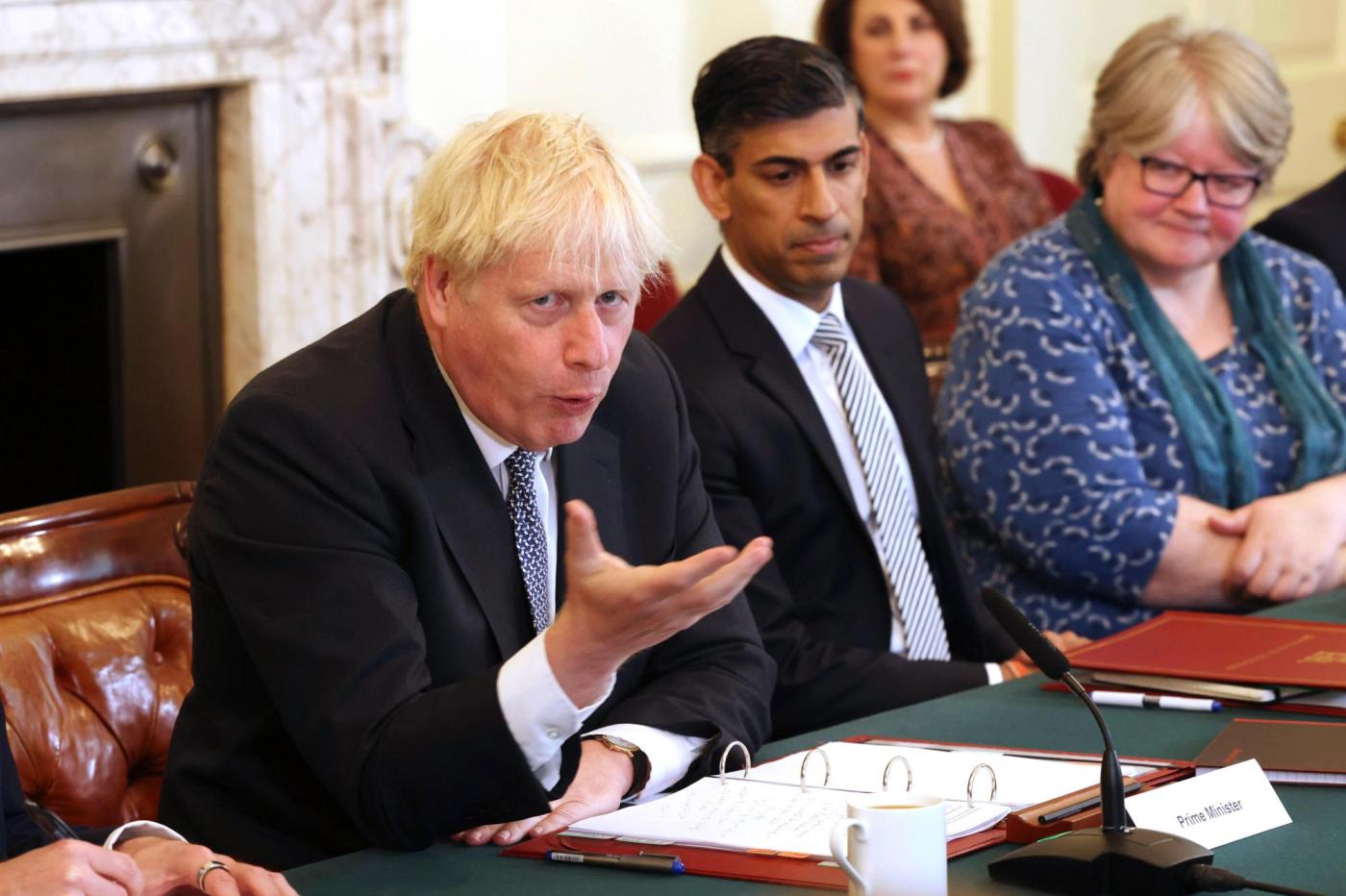 By DANICA KIRKA and JILL LAWLESS

LONDON (AP) — British Prime Minister Boris Johnson says he plans to stay in power despite the resignations of two top Cabinet ministers and a slew of more junior officials.

Johnson told lawmakers Wednesday that “the job of a prime minister in difficult circumstances when you’ve been handed a colossal mandate is to keep going.”

Johnson’s hold on power has been shaken by the resignations of Treasury chief Rishi Sunak and Health Secretary Sajid Javid. They quit Tuesday saying they could no longer support Johnson because of his handling of ethics scandals including the case of a senior official accused of sexual misconduct.

Johnson quickly replaced the two men, but a string of junior ministers have also quit, and Johnson’s support inside his Conservative Party is shrinking rapidly.

Opponents hope to change party rules to allow a new no-confidence vote in Johnson. He survived one such vote last month, with 41% of lawmakers voting against him.

LONDON (AP) — A defiant British Prime Minister Boris Johnson battled to stay in power Wednesday after his government was rocked by the resignation of two top ministers, who said they could no longer serve under his scandal-tarred leadership.

The most immediate challenge for the leader, who only narrowly survived a no-confidence vote last month, is to get through two public grilling sessions: the weekly Prime Minister’s Questions session in Parliament and a long-scheduled interrogation by a committee of senior lawmakers.

How he handles the tough questions could indicate whether a simmering rebellion in his Conservative Party can gather enough strength to oust him. Also on the horizon is a vote in a powerful party committee that could signal whether lawmakers have the appetite to push for another no-confidence vote.

Johnson is known for his uncanny ability to shrug off scandals, but a series of accusations of misdeeds have pushed him to the brink, and some of his fellow Conservative lawmakers now worry that the leader renowned for his affability could be a liability in elections.

Many are also are concerned about the ability of a weakened Johnson to govern at a time of increasing economic and social strain.

Months of discontent over Johnson’s judgment and ethics within the governing Conservative Party erupted with the resignations of Treasury chief Rishi Sunak and Health Secretary Sajid Javid within minutes of each other on Tuesday evening. The two heavyweights of the Cabinet were responsible for tackling two of the biggest issues facing Britain — the cost-of-living crisis and the ongoing COVID-19 pandemic.

In a scathing letter, Sunak said “the public rightly expect government to be conducted properly, competently and seriously. … I believe these standards are worth fighting for and that is why I am resigning.”

Javid said the party needed “humility, grip and a new direction” but “it is clear this situation will not change under your leadership.”

Mindful of the need to shore up confidence, Johnson quickly replaced the two ministers, promoting Nadhim Zahawi from the education department to treasury chief and installing his chief of staff, Steve Barclay, as health secretary.

But a string of resignations late Tuesday and early Wednesday from more junior ministers — from both the liberal and right-wing branches of the Conservative Party — showed that danger to Johnson was far from over.

In the past few months, Johnson has been fined by police and slammed by an investigator’s report for government parties that flouted the COVID-19 restrictions they imposed on others; saw 41% of Conservative lawmakers vote to oust him in the no-confidence vote; and watched formerly loyal lieutenants urge him to resign.

Through it all, he has vowed to carry on governing — even suggesting he wanted to stay in office until the 2030s.

But former International Development Secretary Andrew Mitchell was among several members of the Conservative Party who told Johnson his time was up.

“It’s a bit like the death of Rasputin. He’s been poisoned, stabbed, he’s been shot, his body’s been dumped in a freezing river and still he lives,’ he told the BBC. “But this is an abnormal prime minister, a brilliantly charismatic, very funny, very amusing, big, big character. But I’m afraid he has neither the character nor the temperament to be our prime minister.”

The final straw for Sunak and Javid was the prime minister’s shifting explanations about his handling of sexual misconduct allegations against a senior Conservative lawmaker.

Last week, Chris Pincher resigned as Conservative deputy chief whip after complaints he groped two men at a private club. That triggered a series of reports about past allegations leveled against Pincher and questions about what Johnson knew when he tapped Pincher for a senior job enforcing party discipline.

Johnson’s office initially said he wasn’t aware of the previous accusations when he promoted Pincher in February. By Monday, a spokesman said Johnson did know of the allegations — but they were “either resolved or did not progress to a formal complaint.”

When a former top civil servant in the Foreign Office contradicted that, saying Johnson was briefed about a 2019 allegation that resulted in a formal complaint, Johnson’s office said the prime minister had forgotten about a briefing on the issue.

It was all too much for ministers who have been sent onto radio and TV to defend the government’s position, only to find it change.

Bim Afolami, who quit as Conservative Party vice chairman on Tuesday, said he had been willing to give Johnson the benefit of the doubt — until the Pincher affair.

But Paul Drexler, chair of the International Chambers of Commerce, warned that soaring food and energy prices are reaching crisis proportions and need to be addressed by a leader who isn’t distracted.

“I would say the most important thing to do is to feed people who are hungry,’ he told the BBC. “I mean that is a burning platform at the moment. The poorest in our society are going to be starving to death the second half of this year. That needs to be addressed.”

Opponents are also trying to force another no-confidence vote over the prime minister. The existing rules require 12 months between such votes, but the rules are made by a party committee and can be changed. Elections for that committee’s executive are due in the next few weeks.

Follow all of AP’s coverage of Prime Minister Boris Johnson at https://apnews.com/hub/boris-johnson