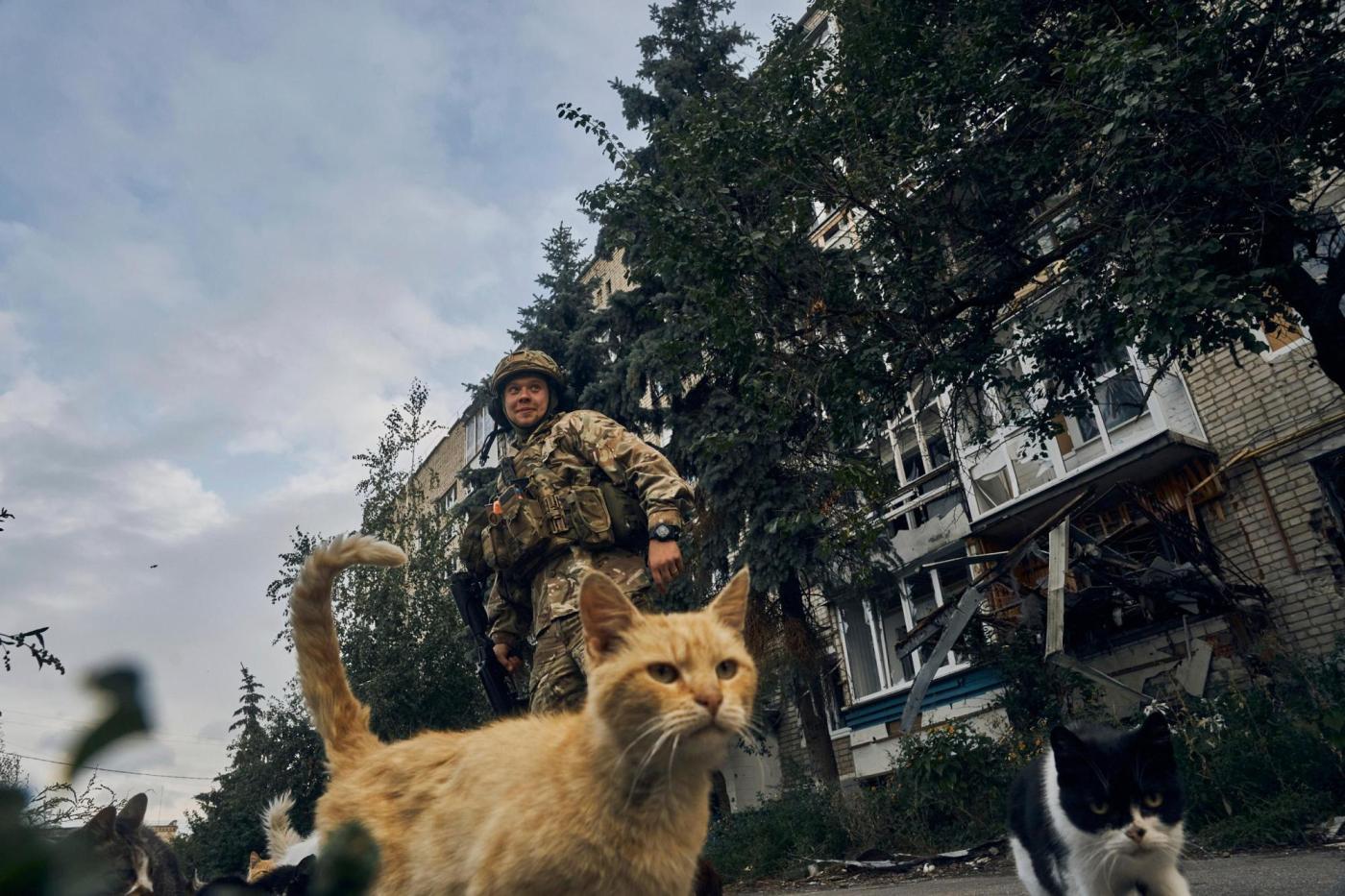 By ELENA BECATOROS and HANNA ARHIROVA

As Zelenskyy looked on and sang the national anthem, the Ukrainian flag was raised in front of the burned-out city hall. After almost six months under Russian occupation, Izium was left largely devastated, with apartment buildings blackened by fire and pockmarked by artillery strikes.

A gaping hole and piles of rubble stood where one building had collapsed.

“The view is very shocking, but it is not shocking for me,” Zelenskyy told journalists, “because we began to see the same pictures from Bucha, from the first de-occupied territories … the same destroyed buildings, killed people.”

Bucha is a small city on Kyiv’s outskirts from which Russian forces withdrew in March. In the aftermath, Ukrainian authorities discovered the bodies of hundreds of civilians dumped in streets, yards and mass graves. Many bore signs of torture.

Prosecutors said they so far have found six bodies with traces of torture in recently retaken Kharkiv region villages. The head of the Kharkiv prosecutor’s office, Oleksandr Filchakov, said bodies were found in Hrakove and Zaliznyche, villages around 60 kilometers (35 miles) southeast of Kharkiv city.

“We have a terrible picture of what the occupiers did. … Such cities as Balakliia, Izium, are standing in the same row as Bucha, Borodyanka, Irpin,” said Ukrainian Prosecutor General Andriy Kostin, listing places where the Ukrainians have alleged Russian forces committed atrocities.

Local authorities have made similar claims in other areas Russia previously held, but it was not immediately possible to verify their information. They have not yet provided evidence of potential atrocities on the scale described in Bucha, where the number and conditions of civilian casualties prompted international demands for Russian officials to face war crime charges.

Moscow’s recent rout in northeast Ukraine was its largest military defeat since Russian troops withdrew from the Kyiv area months ago. On the northern outskirts of Izium, the remains of Russian tanks and vehicles lay shattered along a road.

U.S. President Joe Biden observed Wednesday that Ukrainian forces have made “significant progress” in recent days but said, “I think it’s going to be a long haul.”

While criticism of the invasion seems to be increasing in Russia, German Chancellor Olaf Scholz said after a phone call with Russian President Vladimir Putin, “Unfortunately, I cannot tell you that the realization has grown over there by now that this was a mistake to start this war.”

The Ukrainian governor of the eastern Luhansk region, Serhiy Haidai, said Ukrainian forces were preparing to retake the region, which borders the Kharkiv region and was has been mostly under Russian control since July. Mobile internet service was down, and intense shelling of Ukrainian forces continued, according to Haidai.

He told The Associated Press that Ukrainian guerrilla forces were flying Ukrainian flags in the cities of Svatove and Starobilsk.

But in Kreminna, another city where Ukrainians raised their flag, Russians returned Wednesday and “tore down the (Ukrainian) flags and are demonstrably showing that they’re there,” Haidai said.

A separatist military leader confirmed the Ukrainian advance on the Luhansk region. Andrei Marochko, a local militia officer, said on Russian TV that the situation was “really difficult.”

“In some places, the contact line has come very close to the borders of the Luhansk People’s Republic,” Marochko said, referring to the independent state the separatists declared eight years ago.

The counteroffensive has left more weapons in Ukrainian hands.

Russian forces likely left behind dozens of tanks, armored personnel carriers and other heavy weaponry as they fled Ukraine’s advance in the east, a Ukrainian think tank said Wednesday.

The Center for Defense Strategies said one Russian unit fleeing the Izium area left behind more than three dozen T-80 tanks and about as many infantry fighting vehicles. Another unit left 47 tanks and 27 armored vehicles.

The center said Russian forces tried to destroy some of the abandoned vehicles through artillery strikes as they fell back. Typically, armed forces ruin equipment left behind so their opponent can’t use it.

However, the chaos of the Russian withdrawal apparently forced them to abandon untouched ammunition and weapons.

With the recent Ukrainian gains, a new front line has emerged along the Oskil River, which largely traces the eastern edge of the Kharkiv region, a Washington-based think tank, the Institute for the Study of War, said Wednesday.

“Russian troops are unlikely to be strong enough to prevent further Ukrainian advances along the entire Oskil River because they do not appear to be receiving reinforcements, and Ukrainian troops will likely be able to exploit this weakness to resume the counteroffensive across the Oskil if they choose,” the institute said.

In other areas, Russia continued its attacks, causing more casualties in a war that has dragged on for nearly seven months.

The Nikopol area, across a river from the shut down Zaporizhzhia Nuclear Power Plant, was shelled three times during the night, with no injuries were immediately reported, regional governor Valentyn Reznichenko said.

Fighting also raged in the eastern Donetsk region, where shelling killed five civilians and wounded 16. Together, Luhansk and Donetsk make up the Donbas, an industrial area that Moscow set out to capture following an unsuccessful attempt to invade Kyiv.

U.S. President Joe Biden observed Wednesday that Ukrainian forces have made “significant progress” in recent days but said, “I think it’s going to be a long haul.”

While criticism of the invasion seems to be increasing in Russia, German Chancellor Olaf Scholz said after a phone call with Russian President Vladimir Putin, “Unfortunately, I cannot tell you that the realization has grown over there by now that this was a mistake to start this war.”

Western military and economic support have allowed Ukraine to keep fighting since Russia invaded on Feb. 24, and and the Ukrainian government received more assistance Wednesday.

An international group of creditors, including the U.S., finalized a deal to suspend Ukraine’s debt service through the end of 2023, helping the country ease liquidity pressures and increase social, health and economic spending.