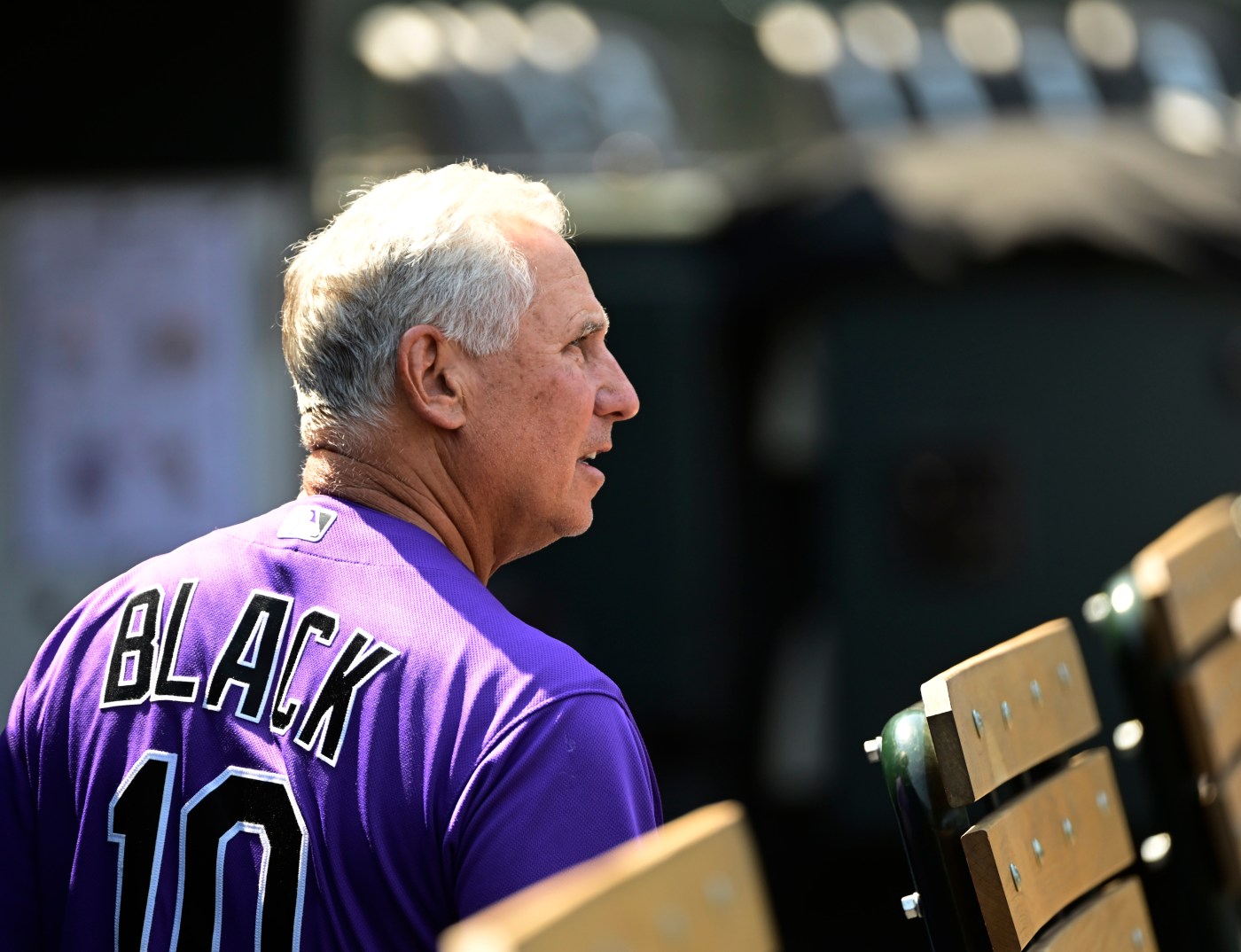 Stuck up to his elbows in the Rockies’ pile of stink, nobody would blame manager Bud Black if he took this job and shoved it.

So I felt compelled to ask: Doomed to a losing record for a fourth consecutive season, what keeps Black shoveling all the stuff associated with managing a last-place team, when it would be easier to take his ball and go home?

“I want to be part of the solution to help us win,” Black told me Wednesday.

Quit as manager of the Rockies? No way.

While this franchise might be in the business of pushing Nolan Arenado out the door for the sin of hating defeat, history has also taught us team owner Dick Monfort hates to fire anyone who makes baseball decisions on the field or in the front office at 20th and Blake.

Surrender is not in the DNA of Black, although friends sometimes ask: Why does a 65-year-old man chase the quixotic dream of winning a championship with the Rockies?

“That’s a good question,” said Black, sitting in the same Colorado dugout that eventually broke the spirit of his predecessors, causing baseball lifers Jim Tracy and Walt Weiss to throw up their hands and walk away from this madness. “I get asked by other people my age: ‘How long are you going to do this?’”

After an 8-4 victory against Milwaukee on a sweltering September afternoon, Black’s managerial record in Colorado now stands at 408-438 over the course of six years. While his 48.2 winning percentage is far from gaudy, his success rate is only a tick below Tracy and Don Baylor as the best in the club’s 30-season history.

What has become evident through the decades of Major League Baseball in Denver? Rocks in your head might be required to enjoy the thankless task of managing all the day-in, day-out aggravations of a game not designed to be played at 5,280 feet above sea level. Then there’s the even bigger exasperation of working for ownership that knows it can sell nothing but the promise of sunshine to folks who buy tickets to Coors Field, where there’s a party on the Rooftop in right field, win or lose.

“Nothing beats winning. We’re here to win,” said Black, who won the World Series as a pitcher with the Royals in 1985 and as a coach for the Angels in 2002. “I know what winning feels like. So that’s what drives me. I want my coaches and players to experience that same feeling.”

With the current Colorado roster a mishmash of retread veterans such as first baseman C.J. Cron and starting pitchers that, like German Marquez, seem to constantly struggle to find their mojo, does Black honestly believe the Rockies have a shot to be contenders anytime soon?

“All I know is that during the conversations we have, in small groups upstairs, I’ve never sensed anything but a strong want-to to be good. The people upstairs care,” said Black, whose contract with the Rockies runs through 2023.

This summer, as the wheels have fallen off the Rockies’ bandwagon once again, fingers of blame have been pointed at the driver of the bus. Black, whose area of expertise is the physical mechanics and psychological challenges of throwing strikes, has guided a Colorado pitching staff to a 5.05 earned run average that ranks dead last in the National League.

Does Black know how much his decisions in the dugout are second-guessed? You bet. He hears criticism on the regular. In fact, it starts at home.

“My wife second-guesses me all the time,” Black said. “She asks: ‘Why did you bring in so-and-so to pitch the seventh inning?’ My wife has been doing that forever.”

So why doesn’t he leave all this frustration behind and retire to the beach?

In Black’s mind, he has filed away four major reasons why he keeps showing up in the dugout with a smile on his face.

No. 1: “I love this game, and have loved this game since I was a Little Leaguer. I love putting the uniform on.”

No. 2: “I take a lot of joy in the teacher, leader and mentor part of this job. Talking baseball, whether it’s about players, strategy or mechanics.”

No. 3: “I love the fraternity of baseball, and the people in this game.”

No. 4: “My family loves that I still do this. That helps. My family likes baseball and they like that I’m involved.”

His list complete, Black asked me: “Are you a country music guy?”

He wanted to know if I remember a classic song by George Strait. “Troubadour” reached No. 7 on the country charts in 2008. All these years later, the lyrics speak to Black:

Most of the time.

I still raise a little cain with the boys.

Singing above the crowd and the noise.

Nobody sings the game’s praises louder than Black. He loves this stuff, even when the baseball stinks.

He was a young baseball troubadour when he took the mound in Little League. And my guess is somebody will have to pry the ball from the hand of an old troubadour before Black rides off into the sunset.

“I think I’ll know when it’s time to move on,” Black told me. “I will probably get to that point one day. But maybe not. I still like it.”