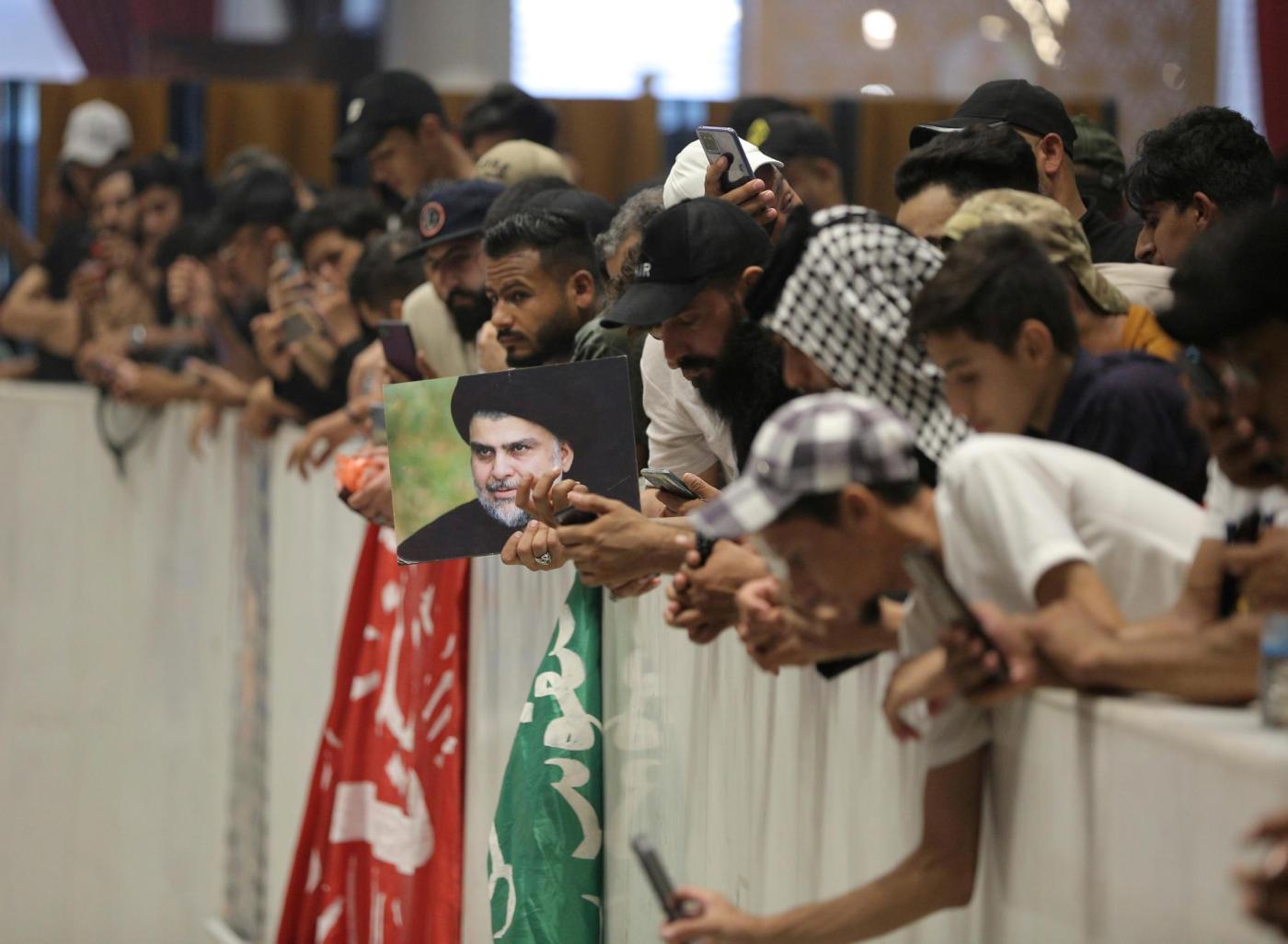 By SAMYA KULLAB and QASSIM ABDUL-ZAHRA

BAGHDAD (AP) — Hundreds took to Baghdad streets on Monday in a counter-protest planned by Iran-backed groups and Shiite political rivals against an influential cleric whose followers stormed the parliament building over the weekend and are staging a sin-in there.

Many fear the dueling protests in the Iraqi capital could escalate tensions. The prospect of opposing demonstrations deepens the crisis and the political vacuum that Iraq has been plunged into since federal elections last October.

Iraqi security forces erected concrete barriers ahead of the street protest called for by a political alliance of Iran-backed groups opposed to the followers of Shiite cleric Muqtada al-Sadr, who are camped out inside the parliament building in Baghdad’s heavily fortified Green Zone.

Hundreds of Shiite men arrived at the July 14th Bridge, which leads to the Green Zone, waving Iraqi flags and those belonging to Iran-backed groups and figures.

“We are sending a message to the other side that we are with the law, the state,” said one demonstrator, a member of former Prime Minister Nouri al-Maliki’s State of Law party. He declined to provide his name, fearing for his safety.

The counter-protest was called for by the Coordination Framework, an alliance lead by Shiite parties close to Iran. It has instructed the participants not to enter the Green Zone but to “wait for instructions.”

That signaled to protesters not to clash with al-Sadr’s followers, but opened the possibility of drawn-out demonstrations in a standoff between the two Shiite factions in Iraq.

The alliance also called on supporters to respect state security forces and carry Iraqi flags. The concrete walls erected earlier by the security forces could act as a buffer, blocking off passage from the bridge to the Green Zone.

On Sunday, al-Sadr had egged on his followers camped out inside the parliament, calling for a “revolution” to change the political system, the constitution and abolish his rivals. He urged Iraqi tribes to join him, a message his rivals see as a call to a coup.

However, fractures have appeared within the leadership of the Coordination Framework, with some members calling for restraint and others pushing for escalation.

Al-Maliki, the head of the alliance, and Shiite leader Qais al-Khazali, appear to be leading the push for protests. Meanwhile, Fatah Alliance chief Hadi al-Ameri is urging control and moderation, two Shiite political officials tole The Associated press, speaking on condition of anonymity in line with regulations.

Kataib Hezbollah, another Iran-backed militia group, has also suggested it will not participate in the street protests.

If things escalate, it would be the closest that al-Sadr and al-Maliki’s followers have come to a confrontation since 2008, under the former prime minister when Iraqi troops drove out al-Sadr’s then-militia, the Mahdi Army, out of the southern city of Basra.

Al-Sadr and al-Maliki, powerful in their own right, have been bitter enemies ever since.

Thousands of al-Sadr’s loyalists stormed the parliament on Saturday, using ropes and chains to topple concrete barriers around the area. They have since been holding a sit-in there after taking over the parliament in a protest against efforts by al-Sadr’s rivals to form the next government.

Al-Sadr and his party, though the winners in the October parliamentary elections, were unable to muster majority support to form a government. The chance to do so now is with the Coalition Framework, which has nominated a protégé of al-Maliki for the post.