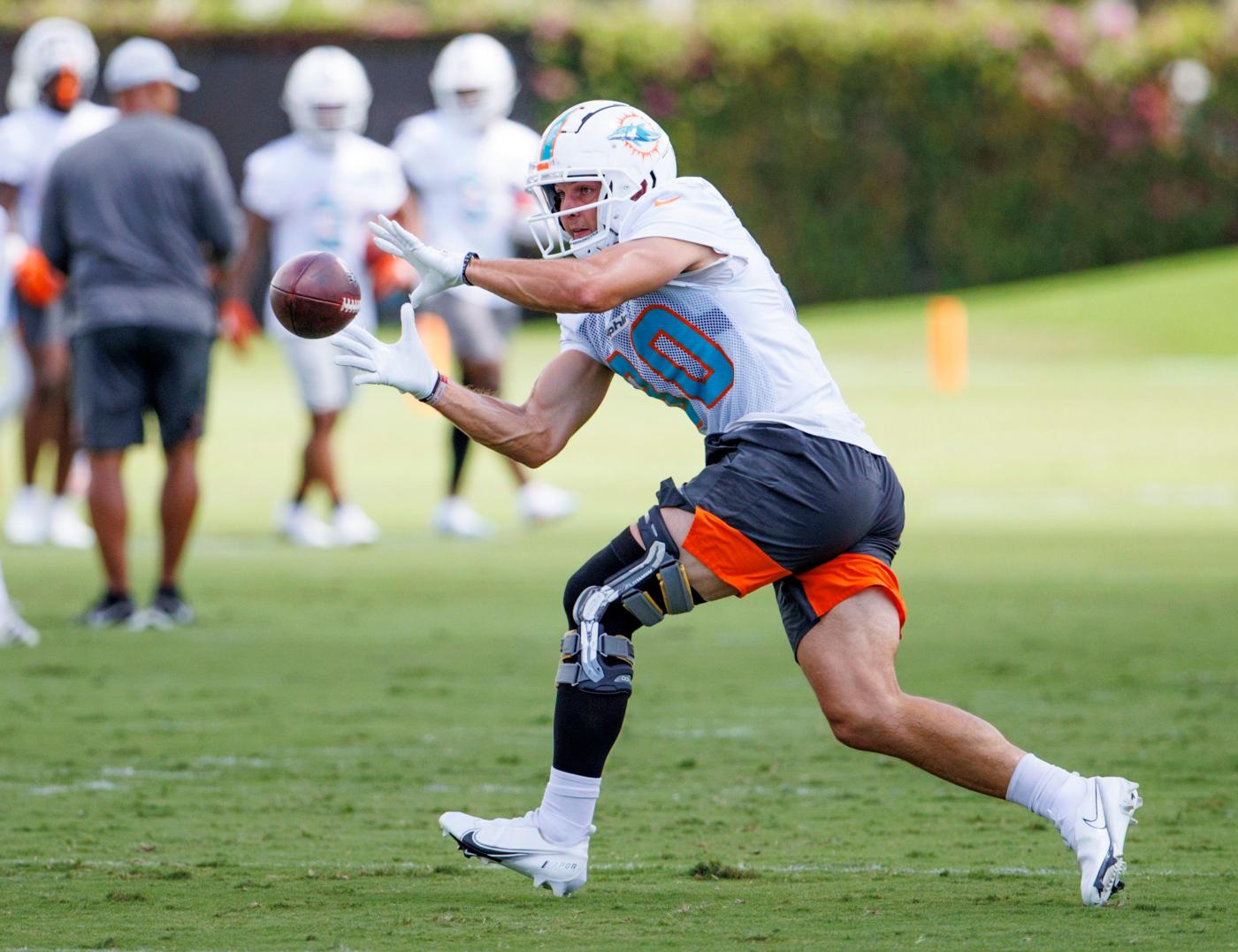 Conner made the Dolphins’ active roster after a position change from wide receiver at Idaho State. After a strong start at training camp, the Dolphins brass thought so highly of him they kept him on the 53-man roster despite missing the final two weeks of camp and two of three preseason games with a knee injury.

“It’s been an eye-opening experience for me, but it’s shown me that I have the potential to do it,” Conner said. He was limited in practice this week ahead of Sunday’s opener against the New England Patriots, with a brace on his right knee

It all started with Dolphins coaches seeing the potential for Conner to play tight end when they used one of their 30 pre-draft visits to check him out. The big-bodied receiver in college is now listed at 6-foot-3, 232 pounds.

“They all saw something in me that I didn’t even see in myself — playing tight end,” Conner said. “When I got here, I just knew that I was going to do everything I could to make that come to fruition, give them everything I had.”

Conner did exactly that. He was a constant practice standout, often making multiple catches on a variety of routes on a given day.

“The opportunities they gave me, I made plays with them. I tried to make my assignment correct every single time. I tried to line up in the right spot and just do my job,” he said. “I just showed that I was coachable and that I was willing to do whatever they asked me to. Whatever role they give me, I’m going to do it full speed.”

Conner continued to make plays when the Dolphins took on the Buccaneers for joint practices in Tampa. He then had three catches on three targets for 25 yards in the exhibition on Aug. 13.

Even as his knee injury cut his preseason short, there was a sense around the Dolphins that, if they cut Conner to try to stash him on the practice squad, another team would swoop in to claim him off waivers.

“We felt that, talent-wise, we would have lost him,” general manager Chris Grier said after the Dolphins made their final cuts. “We had multiple people, other teams, just calling and asking about him. We think he’s got a good future here, potentially, so for us, we’re excited to have him here.”

Talk about a move to tight end started during the draft process for Conner, before he signed with Miami as an undrafted free agent on May 13. After going through his initial rookie minicamp, organized team activities and mandatory minicamp in the offseason, Miami tight ends coach Jon Embree gave him things to work on in the break before training camp. Embree said Conner came back “light years ahead” by late July.

Teams already knew he could catch the ball. He had 2,212 receiving yards and 15 touchdowns over his final three college seasons — one of those a six-game shortened season in the spring of 2021 due to the COVID-19 pandemic postponing the Big Sky Conference’s fall 2020 season. He earned first-team all-conference honors that year.

Blocking at the tight end position was going to be the bigger challenge as a converted receiver.

“That’s a learning curve for anyone coming out of college,” fellow tight end Durham Smythe said. “Tight ends coming out of college have to adjust to the NFL, so obviously, he started from a way lower point, but his overall game, he’s gone and made incredible strides in the last five months.”

“The blocking, just kind of took on a lot of deliberate work and started from the ground up,” said Conner, who noted hitting the sleds has allowed him to get his blocking footwork down. “It’s been a lot of reps, watching guys, watching a lot of film, really hammering the fundamentals.”

He blocked some in college, but Idaho State ran a lot of run-pass option, so he was still running a route on running plays. Even then, he’d be on an island against a college cornerback instead of a grown man in the front seven of an NFL defense.

“Some of those guys outweigh me by quite a bit, so I’m going to do everything I can to just try and get in their way,” Conner said. “During the [preseason opener against the Buccaneers], I had a few blocks where I was like, ‘At least I stopped him.’ I felt good about that.

“It’s not always going to go my way. You’re going to get tossed around sometimes, but that’s football.”

Conner will keep working on that while capitalizing on the strengths he already has in his game.

“I loved how physical he was with the football,” Embree said. “I think you glean a lot about a person’s mentality when they have the ball, and he was physical with it in college.

“He really made a lot of strides. He picks up things real quickly.”