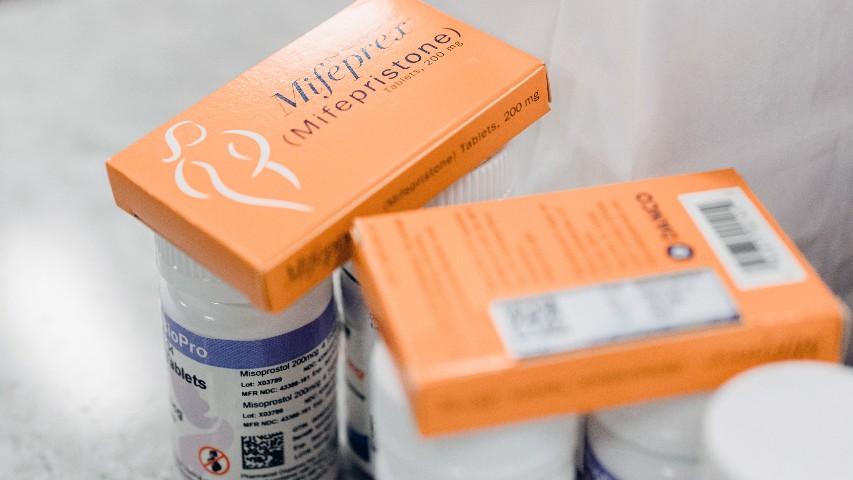 In states that have banned abortion, some women with unwanted pregnancies are pursuing an unconventional workaround: They are “self-managing” their abortions, seeking out the necessary know-how online and obtaining the medications without the supervision of a clinic or a doctor.

At first glance, the practice may recall the days before Roe v. Wade, when women too often were forced to take risky measures to end an unwanted pregnancy. But the advent of medication abortion — accomplished with drugs, rather than in-office procedures — has transformed reproductive care, posing a significant challenge to anti-abortion legislation.

Even before the Supreme Court’s decision to overturn Roe v. Wade, medication abortions accounted for more than half of abortions in the United States. Federal regulators made access to the pills even easier during the pandemic by dropping the requirement for an in-person visit and allowing the drugs to be mailed to patients after a virtual appointment.

But many states never allowed telehealth abortion, and new laws prohibiting abortion apply to all forms of the procedure, including medications. So women in increasingly restrictive parts of the country are procuring the pills any way they can, often online, despite state prohibitions.

There are no reliable estimates of the number of women who undertake their own medication abortions, according to the Guttmacher Institute, which researches and supports abortion access.

With the overturning of Roe v. Wade, abortion is now banned in at least 10 states, according to a database maintained by The New York Times. Voters in Kansas on Tuesday rejected a ballot measure that would have removed abortion rights protections from the state constitution.

Limits of one sort or another are nonetheless expected in at least half of U.S. states, so both sides of the divide are bracing for an increase in self-managed abortions.

Critics of abortion in any form insist that medication abortions are riskier than claimed and even more so without medical supervision. The procedure should not be undertaken beyond 10 weeks gestation, they note, or performed without a doctor’s visit, because dating a pregnancy accurately is not always possible.

Other medical complications can be missed, they say — including ectopic pregnancy, in which the fertilized egg implants outside the uterus.

Claims that medication abortion is safe “are based on flawed and incomplete data, which prioritize convenience and cost over the health and safety of patients,” said Dr. Christina Francis, chair of the American Association of Pro-Life Obstetricians and Gynecologists, which opposes all abortions except to prevent permanent harm or death to the mother.

Physicians who support abortion tell a different story: There is plentiful evidence that medication abortion is safe, and women already carry out the procedure almost entirely alone at home, even if they do see a doctor to obtain the drugs. Self-management is not so different, supporters argue.

“It’s quite safe and effective based on studies we’ve done, national data provided by the states and the Guttmacher Institute, and the experience of other countries,” said Dr. Beverly Winikoff, founder of Gynuity Health Projects, who performed much of the research on medication abortion that led to its approval in the United States more than 20 years ago.

The procedure typically involves taking two drugs: mifepristone, which stops the pregnancy by blocking a hormone called progesterone, followed a day or two later by misoprostol, which causes the uterus to contract.

More than half a million women had medication abortions in 2020 in the United States, and fewer than half of 1% experience serious complications, studies show. Medical interventions like hospitalizations or blood transfusions were needed by fewer than 0.4% of patients, according to a 2013 review of dozens of studies involving tens of thousands of patients.

A 2018 review by the National Academies of Sciences, Engineering and Medicine found that abortion medication ended pregnancies 96.7% of the time in gestations of up to nine weeks. The World Health Organization endorses self-managed abortion and says it can be used up to 12 weeks gestation.

Medication abortion “is noninvasive, doesn’t cause sepsis and doesn’t cause ruptures of internal organs,” like the illegal abortions of the pre-Roe era, Winikoff said.

“It doesn’t mean people can’t have excessive bleeding and need to get care occasionally, but those are not the dire circumstances of people from 50 years ago,” she added.

The drugs are regulated by the Food and Drug Administration, however, and are intended to be taken under a doctor’s supervision. The agency discourages internet purchases of mifepristone because patients will be “bypassing important safeguards,” officials said in a statement.

But the FDA does not advise against online purchases of misoprostol (brand name Cytotec), which is used to treat a number of medical conditions. Misoprostol can terminate pregnancies by itself, recent studies have shown.

While no treatment is 100% safe, taking the pills “on your own at home does not affect your risk of complications,” said Dr. Carolyn Westhoff, an obstetrician gynecologist and professor at Columbia University and the editor-in-chief of the journal Contraception.

But self-management also means a woman does not have a familiar health care professional nearby to call in case of an emergency or complications. Westhoff and other experts fear that women performing their own abortions may be reluctant to seek medical help in states that have criminalized abortion.

Cassie, 20, who uses the pronouns they and them and asked that only a first name be used because they reside in Texas, where most abortions are banned after about six weeks of pregnancy, managed their own abortion in January.

Cassie, who already had a child and was struggling financially, filled out an online request form for abortion pills from Aid Access, which is based in Europe. The drugs took longer to arrive than expected, and when they did, Cassie’s pregnancy was already 12 weeks along.

“I just took them and prayed for the best,” Cassie said. They experienced heavy bleeding, nausea and “the worst cramps I’ve had in my entire life.”

“I was crying, curled up in a ball of pain in the middle of my bed,” they said.

When the bleeding did not subside, Cassie’s partner drove them to the hospital, where the remaining tissue was removed.

“That was its own horrifying experience of praying that they wouldn’t know or suspect I’d caused it myself,” Cassie said.

Both the know-how and the tools to perform an abortion are increasingly easy to access.

Women who live in states where abortion is legal can turn to U.S.-based telehealth providers like Abortion on Demand and Hey Jane, which offer detailed information to women seeking abortions and provide pills by mail after a video visit in states where these services are legal.

For women in states with abortion bans, Plan C offers a number of workarounds, including a list of online pharmacies selling abortion drugs that the organization has tested and tutorials on setting up mail forwarding in another state to receive the drugs.

The site also refers people to Aid Access, which screens women online and orders abortion pills from overseas pharmacies that are sent in envelopes without return addresses, even to states where abortion is illegal. The group charges $150 or less, depending on income.

Hannah, a 26-year-old in Oklahoma, said she managed her own abortion with pills from Aid Access late last year, when local clinics, overwhelmed with patients from Texas, could not accommodate her.

Hannah, who asked to not be identified because abortion is now banned in her state, said she suffered from depression at times before she became pregnant but had plummeted to a new low and was suicidal.

“I couldn’t afford a pregnancy and was not well enough, physically or mentally, to carry a pregnancy,” she said. Her self-managed abortion was “no worse than a normal period for me.”

A medication abortion cannot be distinguished from a miscarriage, and traces of the pills cannot be discovered if they are taken orally, said Dr. Rebecca Gomperts, a Dutch physician who founded Aid Access.

A study of thousands of women in the United States who received abortion pills from a provider without an in-person visit during the pandemic found that the practice was safe.

Complications are the rare exception. Another recent study looked at self-managed abortions in Nigeria, where abortion is banned except to save the life of the mother, and in Argentina (which legalized abortion up to 14 weeks in late 2020).

Twenty percent of the nearly 1,000 women who participated in the study sought care at hospitals after the procedure, but most only wanted to confirm the abortion was complete. About 4% reported ongoing pain, fever or bleeding. Seventeen required procedures to complete the abortion, 12 stayed in the hospital overnight, and six needed blood transfusions, according to the study, which was published in The Lancet Global Health in late 2021.

The surprise finding was that while some of the women took the mifepristone-misoprostol combination, the success rate for those taking misoprostol alone — a widely used drug that can be purchased in countries like Mexico without a prescription and is fairly inexpensive — was higher than that of the two-drug combination.

Most state laws that restrict abortion make performing an abortion a crime for doctors, not patients. Only three states — South Carolina, Oklahoma and Nevada — have laws that explicitly make it a crime to end one’s own pregnancy.

Other states, however, have wielded child endangerment statutes or other laws against women suspected of terminating their pregnancies.

In Indiana, Purvi Patel was sentenced to 20 years in prison in 2015 for inducing a self-managed abortion; her conviction was overturned in 2016. In Texas, murder charges were brought against Lizelle Herrera earlier this year in relation to a self-managed abortion, but prosecutors said they would not pursue the case.

At least 11 states have laws with broad personhood language that applies to fetuses, said Dana Sussman, deputy executive director of National Advocates for Pregnant Women. At least six — Kentucky, Louisiana, Ohio, South Dakota, Texas and Wyoming — define a fetus as a person throughout the criminal code, making it easier to prosecute women who terminate their own pregnancies.

Both the American Medical Association and the American College of Obstetricians and Gynecologists, which support abortion as an essential component of health care, oppose criminalizing self-managed abortion, as they say doing so will deter women from seeking medical attention.

At the moment, health care providers are not legally required by any state to report patients they suspect of self-managing an abortion, according to If/When/How, an abortion-rights advocacy group. But laws are in flux.

“We’re operating in an area of complete uncertainty,” Sussman said.

This article originally appeared in The New York Times.

Subscribe to bi-weekly newsletter to get health news sent straight to your inbox.