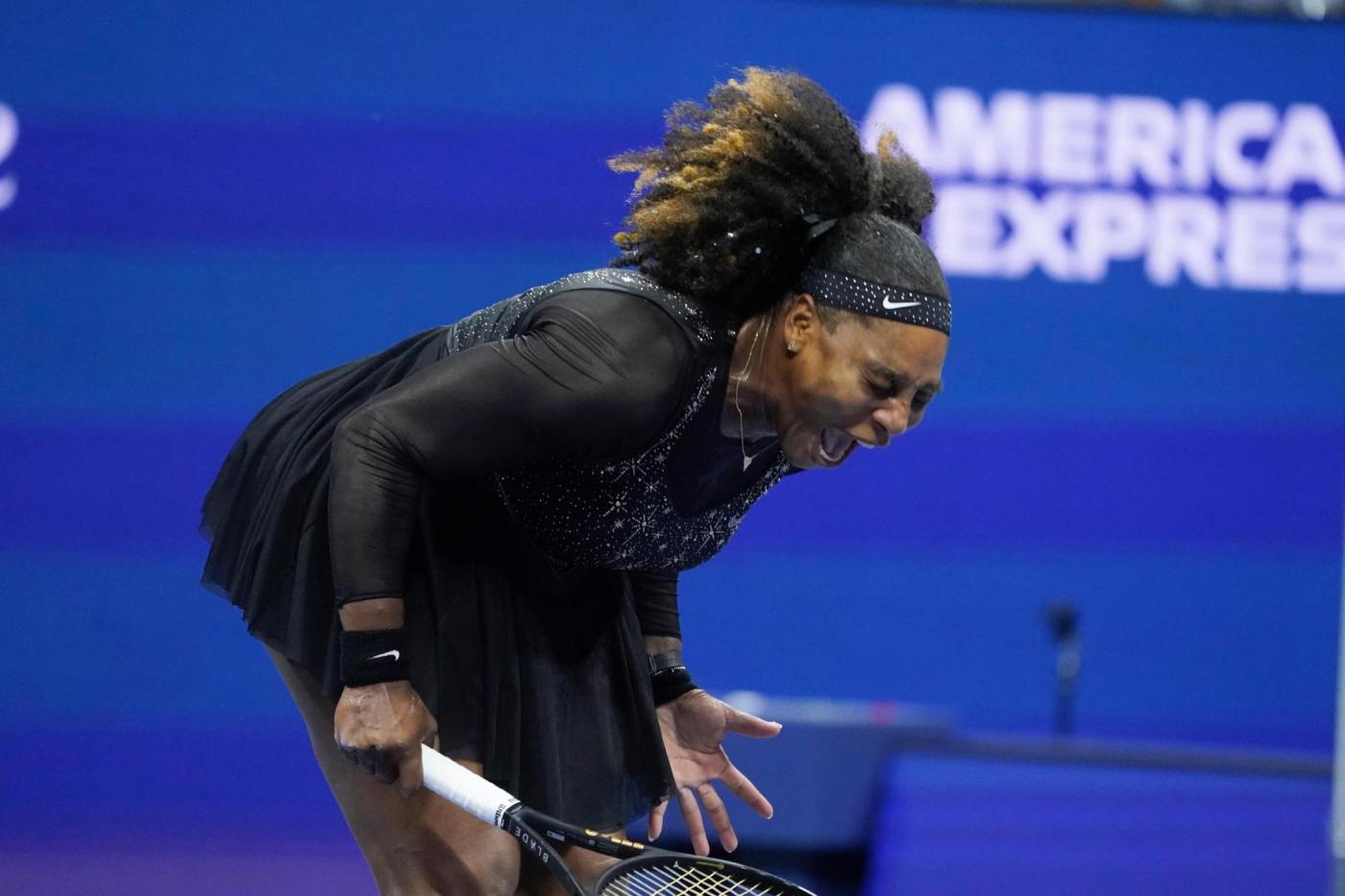 NEW YORK (AP) — Leave it to Serena Williams to not want to go quietly, to not want this match, this trip to the U.S. Open, this transcendent career of hers, to really, truly end.

Right down to what were, barring a change of heart, the final minutes of her quarter-century of excellence on the tennis court, and an unbending unwillingness to be told what wasn’t possible, Williams tried to mount one last classic comeback, earn one last vintage victory, with fans on their feet in a full Arthur Ashe Stadium, cellphone cameras at the ready.

The 23-time Grand Slam champion staved off five match points to prolong the three-hours-plus proceedings, but could not do more, and was eliminated from the U.S. Open in the third round by Ajla Tomljanovic 7-5, 6-7 (4), 6-1 on Friday night in what is expected to be her final contest.

“I’ve been down before. … I don’t really give up,” Williams said. “In my career, I’ve never given up. In matches, I don’t give up. Definitely wasn’t giving up tonight.”

She turns 41 this month and recently told the world that she is ready to start “evolving” away from her playing days — she expressed distaste for the word “retirement” — and while she remained purposely vague about whether this appearance at Flushing Meadows definitely would represent her last hurrah, everyone assumed it will be.

“It’s been the most incredible ride and journey I’ve ever been on in my life,” Williams said, tears streaming down her cheeks shortly after one final shot landed in the net. “I’m so grateful to every single person that’s ever said, ‘Go, Serena!’ in their life.”

Asked during an on-court interview whether she might reconsider walking away, Williams replied: “I don’t think so, but you never know.”

A little later, pressed on the same topic at her post-match news conference, Williams joked, “I always did love Australia,” the country that hosts the next Grand Slam tournament in January.

With two victories in singles this week, including over the No. 2 player in the world, Anett Kontaveit, on Wednesday, Williams took her fans on a thrill-a-minute throwback trip at the hard-court tournament that was the site of a half-dozen of her championships.

The first came in 1999 in New York, when Williams was a teen. Now she’s married and a mother; her daughter, Olympia, turned 5 on Thursday.

“Clearly, I’m still capable. … (But) I’m ready to be a mom, explore a different version of Serena,” she said. “Technically, in the world, I’m still super young, so I want to have a little bit of a life while I’m still walking.”

With 23,859 of her closest friends cheering raucously again Friday, Williams faltered against Tomljanovic, a 29-year-old Australian who is ranked 46th.

Williams gave away leads in each set, including the last, in which she was up 1-0 before dropping the final six games.

Tomljanovic is unabashedly a fan of Williams, having growing up watching her play on TV.

“I’m feeling really sorry, just because I love Serena just as much as you guys do. And what she’s done for me, for the sport of tennis, is incredible,” said Tomljanovic, who has never been past the quarterfinals at any major. “This is a surreal moment for me.”

Then, drawing laughs, Tomljanovic added: “I just thought she would beat me. … She’s Serena. That’s that’s just who she is: She’s the greatest of all time. Period.”

This performance was not perfect.

On one point in the second set, Williams’ feet got tangled and she fell to the court, dropping her racket. She finished with 51 unforced errors, 21 more than Tomljanovic.

Williams let a 5-3 lead vanish in the first set. She did something similar in the second, giving away edges of 4-0 and 5-2, and requiring five set points to finally put that one in her pocket. From 4-all in the tiebreaker, meaning Williams was three points from defeat, she pounded a 117 mph ace, hit a forehand winner to cap a 20-stroke exchange, then watched Tomljanovic push a forehand long.

Momentum appeared to be on Williams’ side. But she could not pull off the sort of never-admit-defeat triumph she did so often over the years.

“Oh, my God, thank you so much. You guys were amazing today. I tried,” Williams told the audience, hands on her hips, before mentioning, among others, her parents and her older sister, Venus, a seven-time major champion who is 42.

“I wouldn’t be Serena if there wasn’t Venus. So thank you, Venus,” Williams said. “She’s the only reason that Serena Williams ever existed.”

They lost together in the first round of doubles on Thursday night, drawing another sellout. And on Friday, as during the younger Williams’ other outings this week, there could be no doubt about which player the paying public favored.

When Tomljanovic broke to go up 6-5 as part of a four-game run to take the opening set, one person in her guest box rose to applaud — and he was pretty much on his own.

They got loud in the middle of lengthy exchanges, also frowned upon.

They offered sympathetic sounds of “Awwwwww” when Williams flubbed a shot, and leapt out of their seats when she did something they found extraordinary. A rather routine service break was cause for a standing ovation.

Tomljanovic draped a blue-and-white U.S. Open towel over her head at changeovers, perhaps to block out all of the noise and distractions.

After Williams struck a swinging backhand volley winner to take a 4-0 lead in the second set, her play improving with every passing moment, the reaction was earsplitting. Billie Jean King, a Hall of Famer with 39 total Grand Slam titles across singles, doubles and mixed doubles, raised her cellphone to capture the scene.

When Williams drove two consecutive forehand winners to lead 5-2 in the second set, she screamed and leaned forward after each.

She could not sustain that level.

Williams entered the night having won 19 times in a row in the U.S. Open’s third round of singles competition, including reaching at least the semifinals in her most recent 11 appearances in New York.

Talk about a full-circle moment: The only other third-round loss she’s ever had at Flushing Meadows (she is 42-0 in the first and second rounds) came in 1998, the year Williams made her tournament debut at age 16.

She would win her first major trophy 12 months later at the U.S. Open. And now she said goodbye in that same stadium.

“It’s been a long time. I’ve been playing tennis my whole life,” Williams said Friday night, after performing one last twirl-and-wave move usually reserved for victories. “It is a little soon, but I’m also happy because, I mean, this is what I wanted, what I want.”