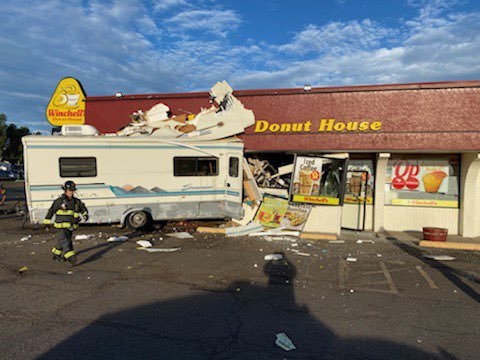 The RV hit the front of Winchell’s Donut House at Pierce Street and West Colfax Avenue, sending both of the people who were in the vehicle to the hospital.

WMFR on scene of an RV into building at Pierce & Colfax. Two people inside the RV, both taken to hospital. Firefighters rescued a dog that was also inside. Structure is damaged, our technical rescue team will be working to shore it up. No one injured inside the business. pic.twitter.com/jz4MUJHfiq

Firefighters also rescued a dog from the RV.

No one in Winchell’s was injured, according to West Metro Fire Rescue.

The front of the business was heavily damaged, and the West Metro Fire’s technical rescue team is working on the building.