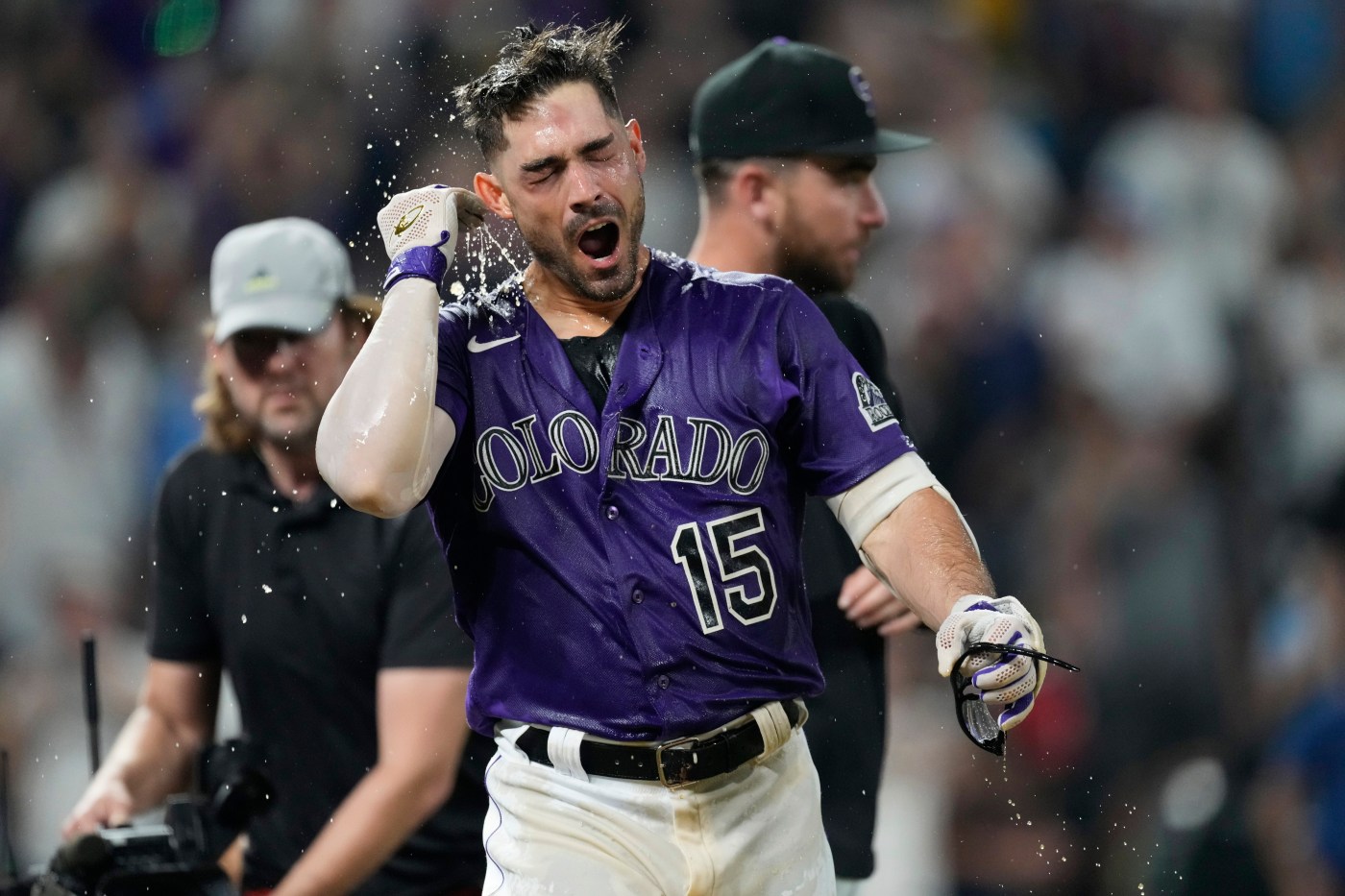 Coors Field, on an unseasonably hot and dry September night, was like a volcano ready to erupt.

And did it ever.

With a first-pitch temperature of 95 degrees — the hottest ever for a Rockies home game in September — the Rockies and Brewers combined for six home runs in Colorado’s thrilling 10-7, 10-inning victory.

They won it on Randal Grichuk’s walk-off, three-run homer off of lefty Taylor Rogers. Grichuk’s second homer of the night traveled 457 feet.

And, oh yeah, earlier in the night, the Brewers’ Christian Yelich launched the longest home run by a left-handed hitter in Coors Field history.

More on that in a moment.

The Rockies, who trailed most of the night, tied the game, 6-6, with a five-run eighth inning, highlighted by a two-run homer by Yonathan Daza (fresh off the disabled list) and a solo shot by Grichuk. Daza launched his homer off of Luis Perdomo. Grichuk’s came off of Peter Strzelecki.

After what Yelich did, he should look into a meaty endorsement deal.

The Brewers’ leadoff hitter rocketed the fourth pitch of the ballgame 499 feet and into the third deck in right-center field. The ball landed not far below the Smashburger sign.

The homer, served up by Colorado right-hander Chad Kuhl, was smashed, indeed. Yelich’s homer fell just 5 feet short of the longest overall — a 504-foot blast by Giancarlo Stanton, then with the Marlins on Aug. 6. 2016. The previous record for lefty homer at Coors came on May 30 of this year by the Marlins Jesus Sanchez off of right-hander Ryan Feltner.

For Kuhl, Feltner, right-hander Jose Urena, and lefty Austin Gomber, tryouts for the Rockies’ 2023 starting rotation have become central to the club’s final stretch of a last-place season.

Kuhl’s latest audition, obviously, did not go well. After serving up the historic homer to Yelich, he walked Willy Adames, setting the table for Hunter Renfroe’s two-run homer and a 3-0 Milwaukee lead.

By the time Kuhl’s 4 1/3-inning performance was done, he gave up five runs on six hits, issuing two walks and striking out five.  After 23 starts, he owns a 5.38 ERA.

Since pitching a masterful complete-game shutout of the Dodgers at Coors Field on June 27, Kuhl is 1-4 in nine starts, posting a 9.08 ERA, allowing 15 home runs over that span for an average of 3.40 home runs per nine innings.

Before Tuesday’s game, manager Bud Black reiterated that Gomber — part of the Nolan Arenado trade — will get his chance to be a starter. Tuesday night, Gomber came on as a middle reliever, giving up one run on one hit with two strikeouts. Gomber’s ERA is 5.56.

Meanwhile, Brewers right-hander Brandon Woodruff dominated the Rockies for seven innings, giving up one run on two hits, with two strikeouts and two walks. His one major mistake was giving up a solo homer to rookie Elehuris Montero in the third inning. It was Montero’s fifth homer in 37 games of his inaugural season.

Freeland is coming off a hard-luck start at Cincinnati. He took a no-decision in the Rockies’ 3-2 loss to the Reds, despite allowing just one run on eight hits over 5 2/3 innings. He’s been roughed up at home recently, going 1-1 with an 8.27 ERA over his last four starts at Coors Field. The lefty has faced Milwaukee four times in his career, going 2-2 with a 2.52 ERA and holding the Brewers to a .205/.297/.341 slash line.

Like Freeland, Lauer is coming off an unfortunate outing. Last Friday at Arizona, Lauer was saddled with the loss in Milwaukee’s 2-1 defeat at Arizona. He surrendered just two earned runs on six hits over 6 2/3 innings. He struck out five and didn’t walk any. Lauer has gone 1-4 with a 7.40 ERA in 10 career starts vs. Colorado. He is 0-4 with an ugly 14.63 ERA in five career starts at Coors Field.

Trending: Brendan Rodgers’ 16 defensive runs saved at second base are the most in the majors and fifth-most among all infielders, Plus, his 2.2 dWAR (Baseball Reference) is tied for the fifth-highest among all major league position players. (Entering Tuesday’s game).