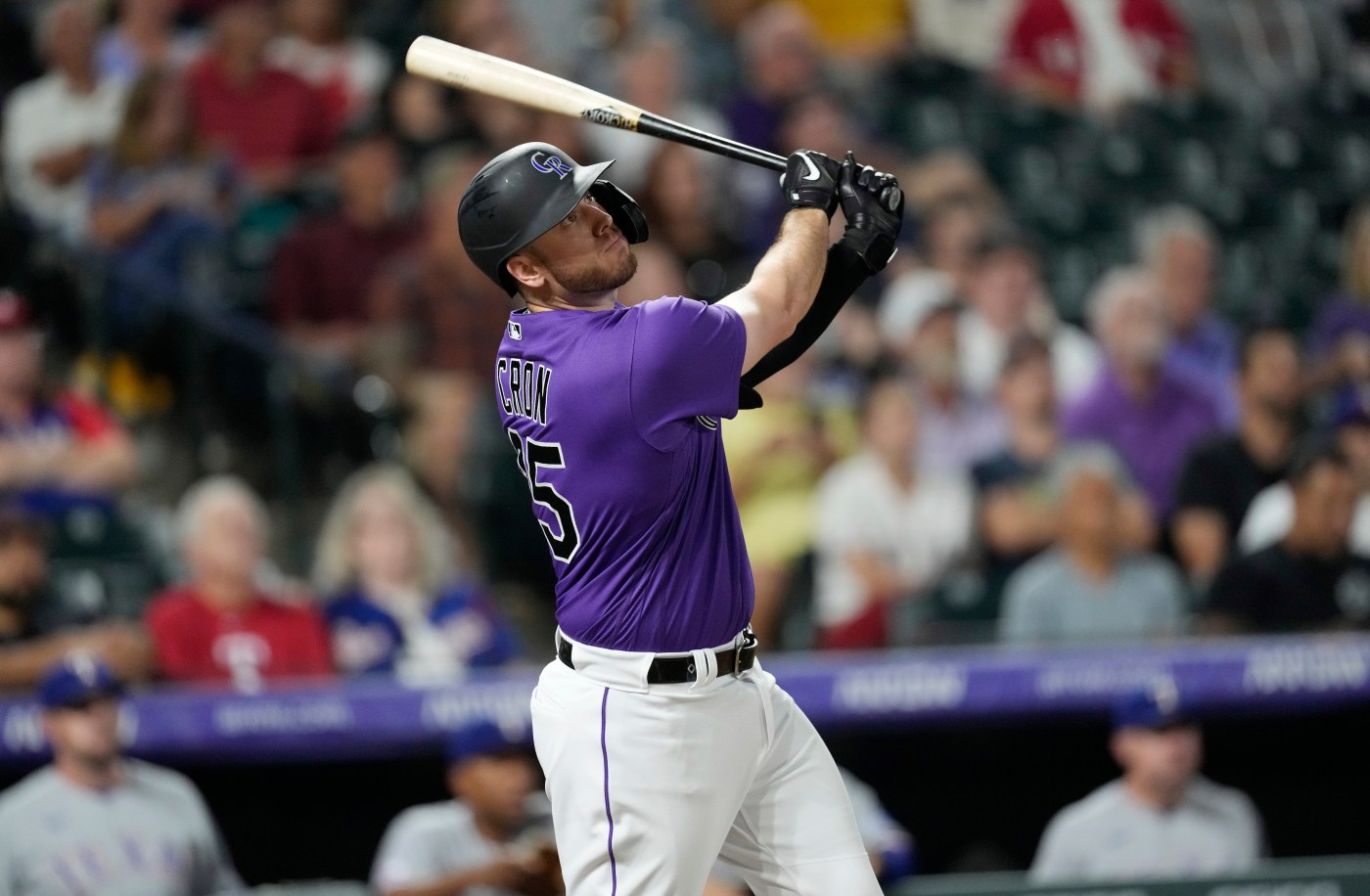 The Rockies’ missing mashers returned Tuesday night and led their team to a 7-6 win over Texas at Coors Field.

First baseman C.J. Cron, mired in a deep slump since the All-Star break, cranked a three-run, opposite-field homer in the seventh inning for the deciding runs.

Catcher Elias Diaz, who came off the injured list Sunday, hit a three-run homer to left off of starter Dane Dunning in the second inning. It was Diaz’s seventh homer of the season but his first since July 25.

Cron, who entered the night hitting .171 with just two home runs and 11 RBIs in 26 games since playing in his first All-Star Game, drove lefty Brock Burke’s first-pitch fastball into the fourth row in right field.

Cron had not played since last Friday and didn’t pick up a bat for three days. A little R&R paid off for him.

“Hopefully that homer is a jump-start for C.J.,”  manager Bud Black said. “This time of year, for him, it’s not mechanical. It’s sort of a combination of a number of things.

“We talk about the expectations players put on themselves, and I think he’s one who puts a lot on his shoulders.”

Black said that Cron hitting his homer the opposite way was a good sign.

“When a guy struggles, especially a guy with power, you have a tendency to want to pull the ball and be aggressive,” Black said. “With C.J., he’s got all-field power and I think that’s a good sign that that happened.”

Daniel Bard returned to form and closed out the game for his 26th save in 29 chances. He gave up a one-out double to pitch-hitter Jonah Heim, but struck out pinch hitter Brad Miller and induced Marcus Semien to ground out to third to finish the game.

The Rockies won despite a poor performance from starter German Marquez, who gave up six runs on eight hits over six innings, leaving him with a 5.22 ERA.

In the clubhouse after the game, Marquez was visibly upset by his performance.

“My fastball was right in the middle and up and they got it pretty good,” he said. “I can’t miss in that spot.

“I feel frustrated. I’ve felt so good for like a month. And a game like this is frickin’ frustrating. But it is what it is and I have to keep going.”

Black said Marquez’s stuff was fine, “as evidenced by seven strikeouts and one walk.” But the manager was quick to note that Marquez’s lack of fastball command really hurt.

“It was a handful of bad fastballs,” Black said. “Some bad fastballs that were, I can only assume, were in the middle part of the plate.”

The game marked another chapter in Marquez’s inconsistent, disappointing season.

The right-hander had taken positive steps forward over his previous seven starts, posting a 3.30 ERA while limiting opponents to a .247/.294/.410 slash line. He had allowed just four home runs over those seven games.

But the Rangers jumped him for three runs in the first inning on a leadoff homer by Semien, a single by Corey Seager and a two-run homer by Nathaniel Lowe. All of that before Marquez recorded an out.

The right-hander settled in after that, until the Rangers’ three-run third put them ahead, 6-3. Bubba Thompson singled, stole second, and scored on Semien’s triple into the right-field corner. Then Marquez walked Seager — ill-advised — before Lowe hit a chopper to first that scored Semien and allowed Seager to take second. Adolis Garcia singled through the left side of the infield to score Seager.

Colorado scored a run in the fifth to cut Texas’ lead to 6-4. Wynton Bernard led off with a single, took second on a wild pitch and scored on Charlie Blackmon’s single. Bernard, the 31-year-old rookie, recorded his first career three-hit game and has hit safely in six of his first eight games in the majors, with multiple hits in three games. He’s hitting .323 (10-for-31) with three stolen bases since his debut on Aug. 12.

The Rockies and Rangers complete their quick, two-game series Wednesday afternoon, with the Rockies seeking their fifth consecutive win over the Rangers. Then the Rockies embark on a 10-day, 11-game road trip that begins Thursday in New York against the Mets.