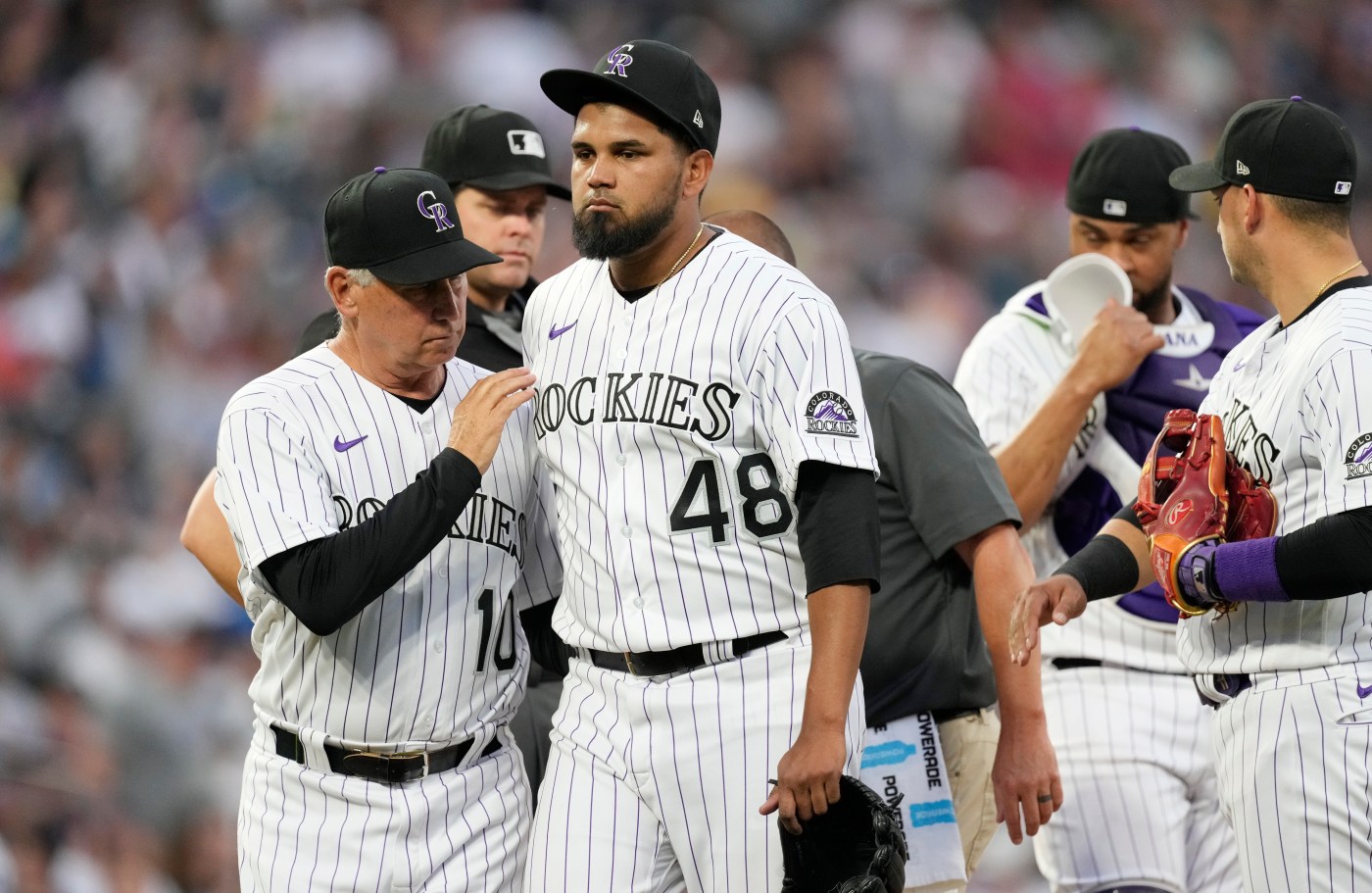 It had been 1,753 days since the Rockies last swept a series from the Dodgers.

But after winning the first two games at Coors Field, and with a resurgent German Marquez taking the mound Wednesday night, the Rockies seemed poised to end the drought.

The Dodgers hammered Marquez, who left the game with an apparent hand injury in the fourth inning, and coasted to an 8-4 victory. Marquez gave up five runs on five hits and three walks in 3 1/3 innings, his shortest start of the season.

The last time Colorado swept a series from Big Blue was Sept. 7-10, 2017, when it won four games at Dodger Stadium.

Marquez entered the game with a 2.89 ERA in 12 career starts against Los Angeles, the third-lowest ERA among all active pitchers with at least 12 starts against the Dodgers, trailing only icons Max Scherzer (2.59) and Adam Wainwright (2.66). But Marquez was treated rudely by first baseman Freddie Freeman, who hit a 446-foot homer to dead center with one out in the first inning.

Two Marquez walks, a sacrifice fly by Eddy Alvarez, and a two-run double by Trea Turner boosted the Dodgers’ lead to 4-0 in the second.

In the fourth, Marquez was visited by a trainer on the mound and later could be seen flexing his right hand while sitting in the dugout.

Despite some late noise, the Rockies were never in the game. Will Smith’s two-run homer off Jhoulys Chacin made it 7-1 in the fifth.

L.A. lefty Julio Urias, who’s had his issues pitching at Coors Field — 2-2 with a 5.91 ERA coming into the game — kept the Rockies in check for five innings, giving up one run in the fourth on Brendan Rodgers’ RBI double. The Rockies chased him in the sixth with two runs, the big hit an RBI single by C.J. Cron.

Colorado was on the cusp of a big inning when Randal Grichuk singled to load the bases against reliever Brusdar Graterol, but struggling third baseman Ryan McMahon grounded into a forceout to end the mini-rally.

Lightning, wind and a thundershower broke out in the eighth inning, but that didn’t stop Cody Bellinger from hitting a screaming leadoff homer off Jake Bird.

Rodgers had a good night, finishing a triple short of the cycle. He launched a two-out solo homer in the eighth off Reyes Moronta. It was Rodgers’ seventh homer of the season.  Rodgers entered the game with 15 extra-base hits in June, tied for the third-most in the National League.

The Rockies have an off day on Thursday before beginning a three-game series against Arizona on Friday night at Coors. Then the Rockies travel to Los Angeles to start another series against the Dodgers on Monday.

On Deck
The Rockies are off on Thursday

Trending: Over their last 21 games (entering Wednesday), the Rockies had posted a team ERA of 3.70. The starting rotation had a 4.19 ERA, while relievers had a combined 2.73 ERA.

At issue: Left fielder Kris Bryan, who returned to the lineup Monday after a long stint on the injured list, has still not made a significant impact. He was 0-for-8 in the first two games of the Dodgers series and hit just .254 with no home runs and four RBIs in 19 games this season.