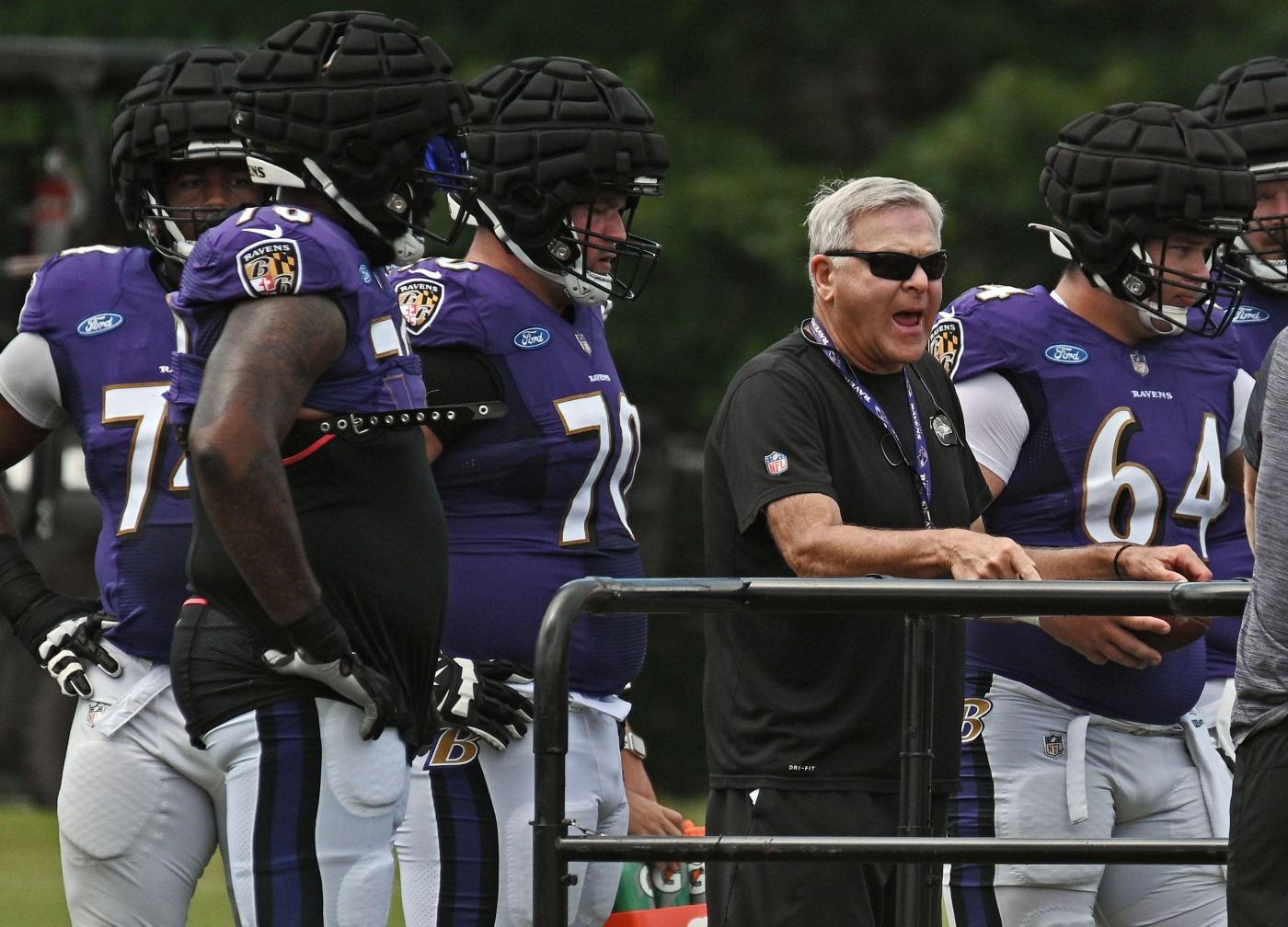 Over the first four days of Ravens training camp, the balance of power in practice had tipped toward quarterback Lamar Jackson and the offense. Completions came easily. Stars excelled. Things went swimmingly.

Then the pads came on Monday, and the defense came to play.

“First day in the pads, about what you’d expect,” coach John Harbaugh said afterward. “Guys working hard; they were into it. Energy and effort was really high. Execution was spotty, which you’d expect, first day in pads. For some reason, it’s always like that. So you’ve just got to keep getting better every day.”

Monday’s defense was better than Saturday’s, which Jackson dissected in the Ravens’ open practice at M&T Bank Stadium. But Monday’s offense, which was without wide receiver Devin Duvernay (thigh) and offensive tackle Ja’Wuan James (undisclosed), also looked as discombobulated and out of sync as it has all camp.

The first time Jackson dropped back in an 11-on-11 drill, he had to scramble. The second time, his short throw to wide receiver Rashod Bateman was broken up by cornerback Kyle Fuller. The first-team offense trudged off the field after a short series.

Connections did not improve when Ravens receivers and defensive backs moved to one-on-ones, which almost always favor the offense. Fuller blanketed wideout James Proche II, one of the Ravens’ best route runners, on the first throw. Over the next five to 10 minutes, most of the team’s wide receivers and tight ends struggled to either get open against press coverage, or weren’t delivered an accurate ball when they did uncover.

Bateman was among the day’s least fortunate players. After getting the better of top cornerback Marlon Humphrey in Saturday’s individual drills, the two faced off again Monday. On their first matchup, Bateman froze Humphrey with a stutter-step release before coasting by him on a vertical route. But with an underthrown ball, Humphrey caught up to Bateman and turned his head in time to disrupt the catch. A few minutes later, Humphrey had his tighter coverage on Bateman rewarded with an overthrow.

Facing tight coverage downfield and an aggressive defensive front, Ravens quarterbacks were often left without much recourse. In Jackson’s second 11-on-11 period, he went 4-for-5 but had to settle for throws near or behind the line of scrimmage: three check-downs to running backs and one screen for fullback Patrick Ricard. Unofficially, Jackson finished 10-for-15 in 11-on-11 work, but his passing yardage might’ve been his lowest of camp.

Tyler Huntley didn’t fare much better. Outside linebacker Odafe Oweh had his first of two would-be sacks against the third-year backup — even in pads, quarterbacks are still off limits — and rookie defensive tackle Travis Jones followed a couple of plays later with a play-killing pass rush so violent that his protective Guardian Cap shell nearly came off his helmet.

Oweh said he spent a lot of the offseason working on his pass rush, and the difference was evident Monday.

A year ago, the 2021 first-round pick out of Penn State was basically a speed rusher. Now he uses his hands better and is physically stronger, which allows him to shed offensive linemen when they get into his body. When running around rookie tackle Daniel Faalele, a fourth-round pick out of Minnesota, Oweh actually dropped his outside shoulder and used it as leverage.

Run defense will be key for the Ravens this season, and it has to be anchored by nose tackle Michael Pierce. The 29-year-old came into training camp about 10 to 15 pounds overweight, and it’s going to take time for him to get into top shape.

There have been times in practice when Pierce has been dominant, but that wasn’t the case Monday. Pierce couldn’t get off blocks and gave up a lot of ground when double-teamed, which can’t happen to a nose guard.

Right now, Pierce is playing too high and trying to wrestle with offensive linemen. On occasion, he’ll look like he just popped out of a toaster because he can’t get low and work his leverage.

Rookie running back Tyler Badie took some repetitions with the first-team offense in passing situations and performed well as a receiver out of the backfield.

But he was also impressive running the ball, cutting back twice to break off two would-be long runs. If he can play special teams, the sixth-round pick out of Missouri has a chance to see the field regularly. Now he has to perform well in preseason games.

The Ravens have tried third-year guard Tyre Phillips at every position along the offensive line except for center, but it might be time to let him settle in at left guard.

During the Ravens’ one-on-one pass-rush drill with defensive linemen, Phillips was the most dominant offensive lineman. They couldn’t move him, and at one point he knocked a defender backward.

It’s good to have versatility, but it’s better to have an outstanding starter at one position instead of shuffling him around.

Second-year outside linebacker Daelin Hayes performed well in offseason workouts, and there was hope he could have a breakout season in 2022.

But in watching Hayes perform Monday, he basically looked like a one-speed performer with very little burst or sudden change of direction. Fortunately, there’s still time for him to improve his explosiveness.

The Ravens are one of the worst screen teams in the NFL, but the one Jackson threw to Ricard was a beauty. No one wants to step in front of that truck when Ricard gets into high gear. That’s 300 pounds of man running downhill. It can be a frightening experience.