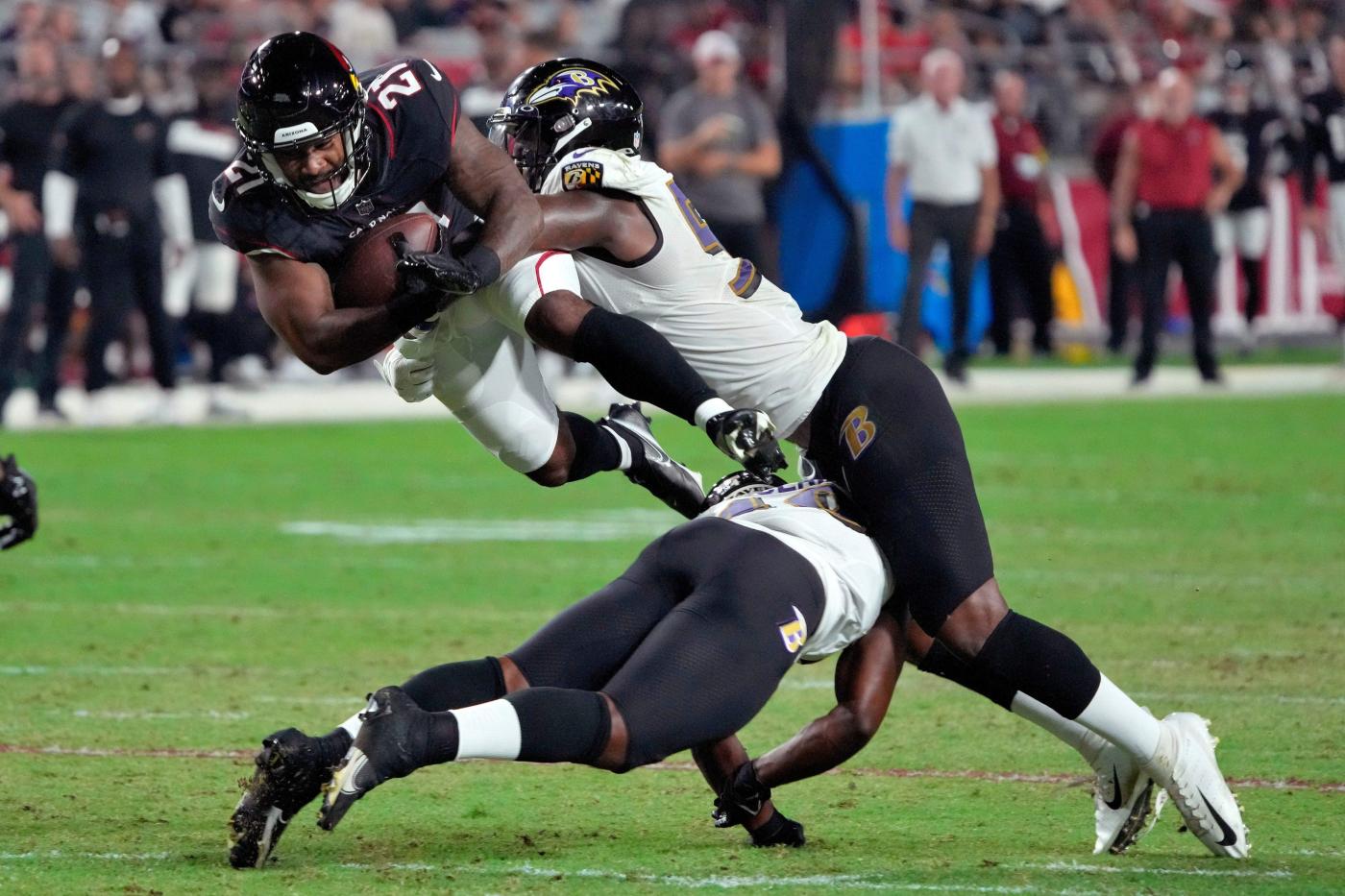 The last game of preseason has never been a showcase for established players, and it would be a shock if Ravens coach John Harbaugh uses more than two or three potential starters Saturday night when his team hosts the Washington Commanders.

Harbaugh has taken a cautious approach to this preseason, perhaps driven by the memory of running back J.K. Dobbins tearing his ACL last August against Washington. We have not seen quarterback Lamar Jackson or most of the team’s other established starters in the Ravens’ matchups with the Tennessee Titans and Arizona Cardinals. Harbaugh said we could “extrapolate” his plan for the Commanders game based on that pattern.

So the Ravens will go for their 23rd straight preseason victory with a crew of players fighting for scraps of regular-season time or, in some cases, a spot on the team’s practice squad. Harbaugh and his staff will cut the roster from 80 players to 53 by Tuesday afternoon, and though most of their decisions were made long ago, a positive final impression never hurts. There are position groups where the pecking order is not set and players who have yet to make a strong impression, in some cases because of injury.

As we sort through the business still to be resolved, here are some players to keep an eye on against the Commanders:

Wallace was the presumed No. 4 receiver coming into training camp, but he got off to a poor start, and his quest to nail down that spot was derailed by a knee sprain suffered in the preseason opener against the Titans. His position grew more tenuous when the Ravens added former Kansas City Chiefs wide receiver Demarcus Robinson, whom Harbaugh praised as a “big, strong receiver with very strong hands.” The Ravens gave Robinson $900,000 guaranteed, which means he’s almost certainly going to be on the team.

Wallace returned to practice Tuesday; we do not know how much his knee sprain might limit him going into Saturday’s game. The 2021 fourth-round pick is probably not in danger of being cut, but he could be in danger of falling out of sight, out of mind if Robinson, who will play against the Commanders, performs well. Wallace could use a breakout game to put his disappointing summer in the rearview mirror and assert his case for a meaningful role.

We probably won’t see Dobbins until Week 1 at the earliest. Mike Davis started the first two preseason games and seems a safe bet to play early in the season. Sixth-round pick Tyler Badie has done enough to stick. That leaves Hill, who earned strong reviews for his play early in training camp after he worked hard to come back from a torn Achilles tendon. The 2019 fourth-round pick has not built on that promising start with impressive preseason numbers — holding penalties cost him 20 yards against the Titans — and he’s had a lack of opportunity (eight carries over two games).

Have the Ravens steered away from using Hill because they already know what he can do? Or is he not a priority in their offense, even with Dobbins sidelined? It will be interesting to see if he plays a greater role against Washington and if that portends the Ravens keeping four running backs to start the season.

The eternal battle to start at left guard rages on, with coaches saying Ben Powers holds a slight advantage because of his consistency. But Phillips actually started on the left side against the Cardinals, with Powers starting at right guard before he played a series as the backup center. That suggested the matter is far from settled.

Phillips has not helped himself in either preseason game. He bore partial responsibility for several pressures and a pair of sacks against the Titans and committed three penalties against the Cardinals. Coaches want to give him the benefit of the doubt because of his size and agility, but they have learned to trust Powers more. Phillips needs to change their minds, and he will likely have ample snaps to make his case against Washington.

Both undrafted free agents built momentum with excellent performances in the first preseason game. Neither performed as well against the Cardinals (two catches combined for 27 yards), and now, Robinson and Wallace stand in their way.

Bridges and Polk could see plenty of targets against the Commanders, probably from third-string quarterback Anthony Brown, who will be auditioning for a spot on the practice squad. Their chances of making the 53-man roster are probably gone, but they’re both tall receivers who could make intriguing developmental prospects.

The undrafted free agent from Michigan has played his way into the roster picture, ranking as the top graded rookie of the preseason, according to Pro Football Focus. He has drawn particular praise for his pass coverage, a weakness for the team’s inside linebackers in recent seasons, and leads the Ravens with nine tackles.

Ross ranks behind Patrick Queen, Josh Bynes and Malik Harrison on the depth chart at inside linebacker, but don’t be shocked if he beats out Kristian Welch for the No. 4 spot. Defensive coordinator Mike Macdonald is a big fan from their time together at Michigan, and Harbaugh noted that Ross has “shown up in games.” He will probably play early and often against Washington as he tries to make his closing argument. Expect to see him on the Ravens’ practice squad if he doesn’t make their 53-man roster.

Mack bulled his way into the Cardinals’ backfield several times in the second preseason game, building on his solid performance throughout training camp. He’s probably on the outside looking in for the Ravens’ 53-man roster, with Calais Campbell, Michael Pierce, Justin Madubuike, Travis Jones, Brent Urban and Broderick Washington ahead of him. But with Jones in jeopardy of missing the beginning of the season because of a knee sprain, might the Ravens find a way to keep Mack in the picture?

Another impressive outing from him would make the Ravens think hard and also serve as an audition for other teams looking to add an interior lineman. Mack looks like an NFL player, regardless of where he ends up.

It’s easy to get lost in the Ravens’ star-studded secondary, and Washington started training camp on the shelf as he worked his way back from a foot injury. He returned to game action against the Cardinals, primarily at cornerback, and produced some nice moments in coverage in the fourth quarter.

Even if Washington builds on that effort with an impressive game against the Commanders, he might be a long shot to make the 53-man roster, with as many as 11 safeties and cornerbacks ahead of him on the depth chart. But Macdonald preaches the value of versatility, and Washington plays multiple spots.

The Ravens would love someone to step forward on the edge, where Odafe Oweh and Justin Houston are the only players they can count on for Week 1. Hayes, a 2021 fifth-round pick, had a major chance to push for playing time this summer but has not taken advantage. Aside from a few flashes as a bull rusher and edge setter, he simply has not made a lot of memorable plays in practice or in the two preseason games.

The good news for Hayes is that opportunity remains with Tyus Bowser still working back from a torn Achilles tendon. If he plays well against the Commanders — a big if, considering he missed Wednesday’s practice — and strings together a few good practices, he could earn meaningful snaps in Week 1. Now is the time for him, because Bowser and second-round pick David Ojabo are on the way.