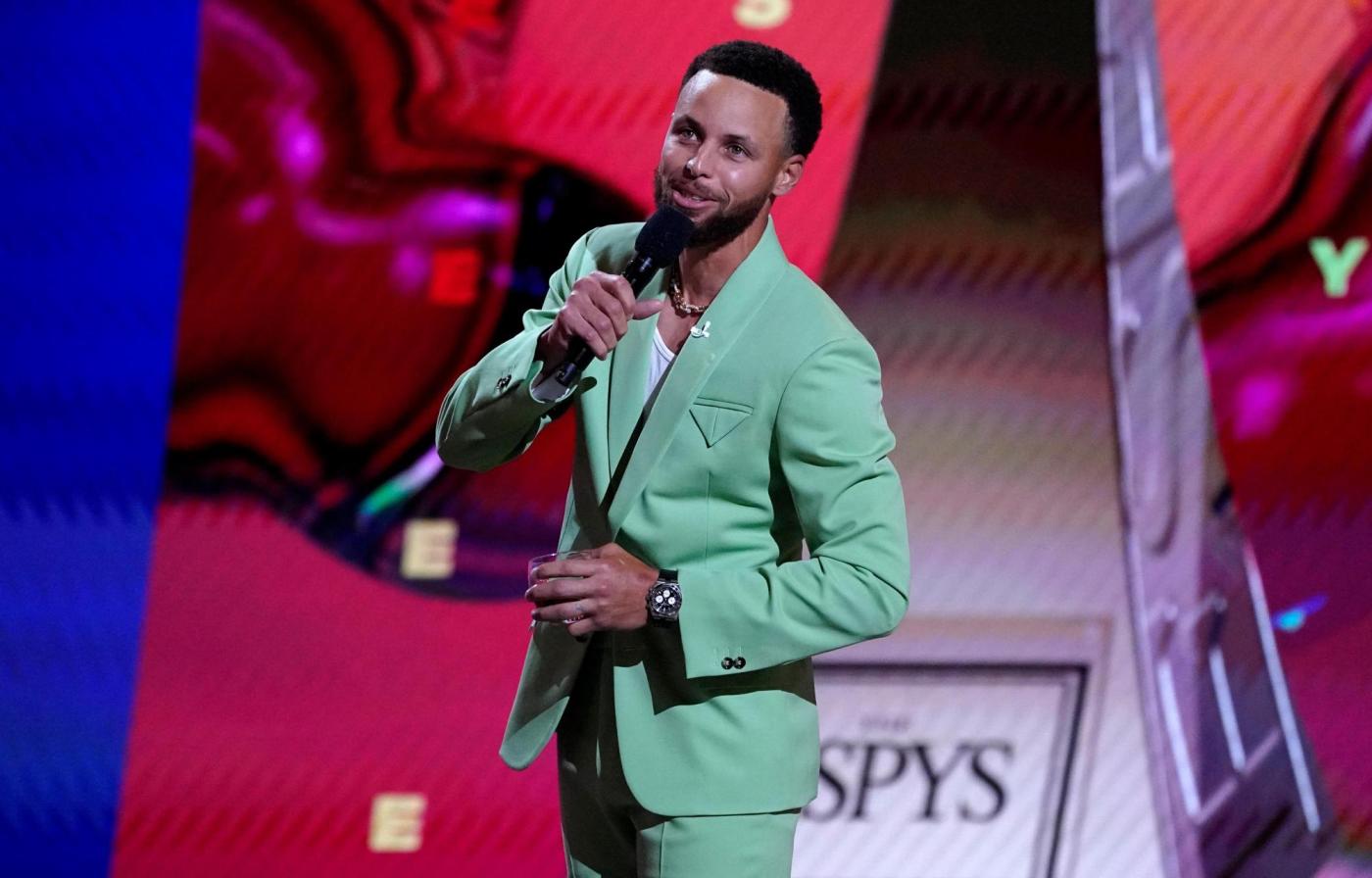 LOS ANGELES (AP) — Soccer player Megan Rapinoe admonished her fellow athletes for not doing enough to speak out and encouraged them to support detained WNBA star Brittney Griner at The ESPYs on Wednesday night.

Griner was arrested in Russia in February after customs officials said they found vape canisters containing cannabis oil in her luggage. She faces up to 10 years in prison if convicted on charges of transporting drugs.

“For me, the most striking thing is that BG’s not here. BG deserves to be free, she’s being held as a political prisoner, obviously,” Rapinoe said while accepting a trophy for best play at the show honoring the past year’s top athletes and moments in sports.

“Like what are we doing here dressed up like we are when our sister is detained abroad? We haven’t done enough, none of us. We can do more, we can support her more, and just let her know that we love her so much.”

Griner has pleaded guilty in court and acknowledged possessing the canisters but said she had no criminal intent.

“It’s been 153 nights now that BG has been wrongfully detained thousands of miles away from home, away from her family, away from her friends, away from her team,” Diggins-Smith said. “All throughout that time, we’ve kept her in our thoughts and in our hearts even though we know that ain’t nearly enough to bring her home, y’all.”

Wearing her Phoenix Mercury jersey under his track suit, Curry noted the effort being made to free Griner.

“But as we hope for the best, we urge the entire global sports community to continue to stay energized on her behalf,” he said. “She’s one of us, the team of athletes in this room tonight and all over the world. A team that has nothing to do with politics or global conflict.”

They were applauded by Griner’s wife, Cherelle Griner, who was in the audience at the Dolby Theatre in Hollywood.

Curry picked up a trophy, too, for best record-breaking performance, having set the mark for most 3-pointers made in league history. He also shared the best team award with the NBA champion Golden State Warriors.

“It’s an honor to be in the same category as all of you. You are the best at what you do,” the Japanese player said, speaking in English via videotape. “Have a wonderful everything and enjoy your afterparties.”

Ledecky earned two golds and two silvers at the Tokyo Games last year, giving her 10 career Olympic medals. She received her trophy from Maybelle Blair, the 95-year-old who played in the All-American Girls Professional Baseball League.

“I represent one of the few sports that is also a really important life skill, so I want to encourage all the parents here, anyone watching, to make sure your kids learn how to swim,” Ledecky said. “Our planet is 70% water, so it’s very important.”

Former heavyweight champion Vitali Klitschko was honored with the Arthur Ashe Award for Courage, having impacted the world beyond sports. Klitschko, mayor of embattled Kyiv, Ukraine, since 2014, wasn’t present. He appeared in a pre-taped video.

King led off a tribute to the 50th anniversary of Title IX, the federal legislation that prohibits sex-based discrimination in schools that receive government funding.

She was joined by Lisa Leslie, Brandi Chastain, Chloe Kim, Allyson Felix, Aly Raisman and Rapinoe, among others. They spoke against a background of black-and-white photos showing women athletes in action, on the field or in the streets advocating for gender equality. Their comments were interspersed with country singer Mickey Guyton performing her songs “What Are You Gonna Tell Her?” and “Remember Her Name.”

The ESPYS were criticized by South Carolina women’s basketball coach Dawn Staley for not inviting consensus player of the year Aliyah Boston to the show. Boston had hoped to attend and was disappointed not to be asked. She was issued a last-minute invitation but declined it.

ESPN said COVID-19 concerns and a smaller venue forced organizers to prioritize invitees to the show. Boston was nominated in a non-televised category that was handed out a night earlier. She lost to Oklahoma softball star Jocelyn Alo, who took part in the Title IX tribute.

ESPN college basketball broadcaster Dick Vitale received the Jimmy V Award for Perseverance. The 83-year-old has undergone multiple melanoma surgeries and six months of chemotherapy for lymphoma over the last year. In March, he said he was cancer free.

Vitale dismissed messages on the teleprompter urging him to conclude his remarks, which stretched to 20 minutes.

“I’m gonna wrap up in about three minutes,” he said in a raspy voice. “Jimmy’s dream was to beat cancer. We must do it because it doesn’t discriminate. It comes after all.”