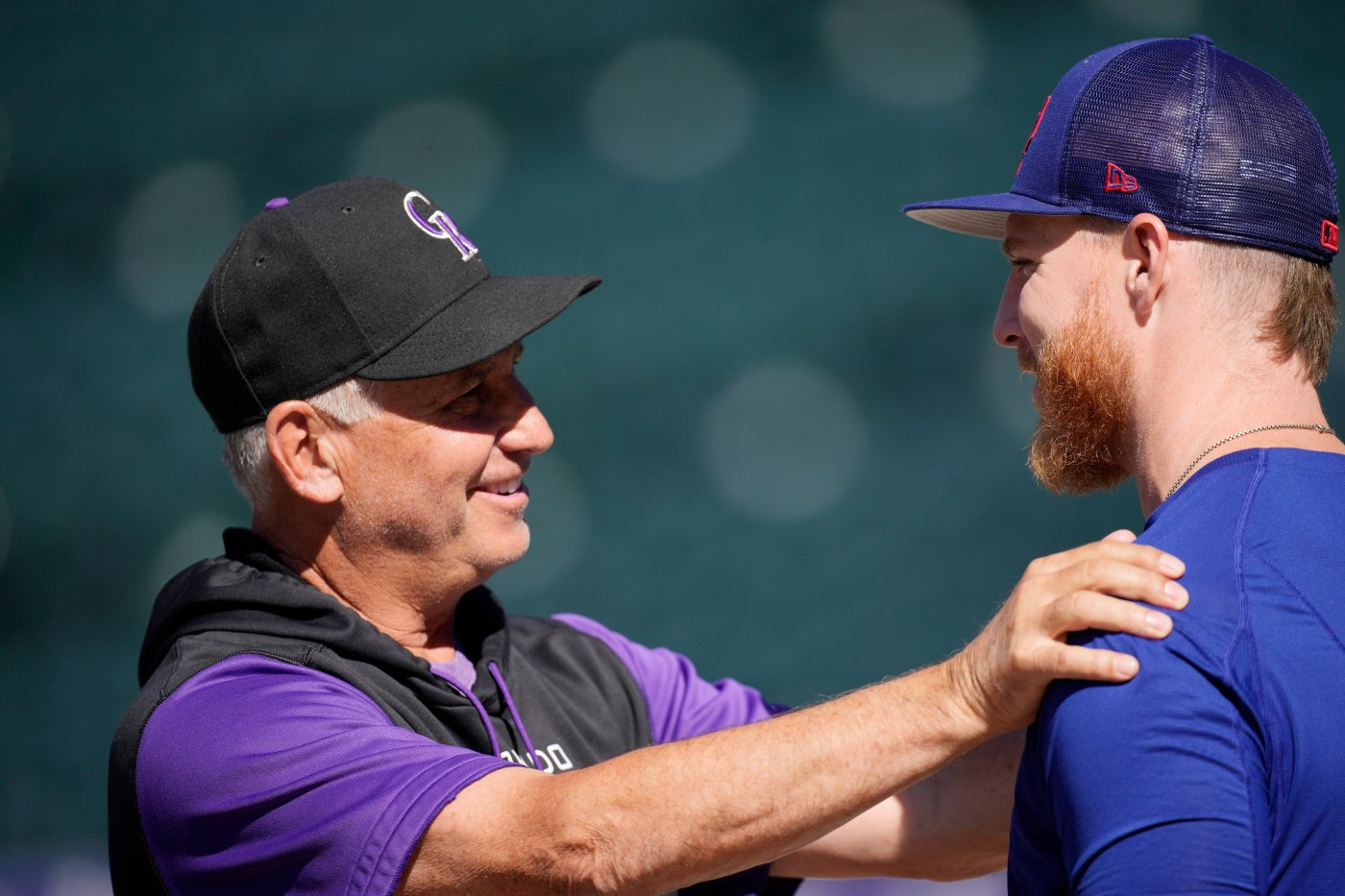 The Rangers’ right-hander, who left the Rockies as a free agent at the end of last season and then signed a four-year, $56 million free-agent deal with Texas, was embraced by a number of Rockies, including manager Bud Black, third-base coach Stu Cole, left-hander Kyle Freeland, right-hander Carlos Estevez and Dinger.

The Rockies also showed a video thank you to Gray prior to the game.

Gray, Colorado’s first-round draft choice in 2013, will always have a soft spot in his heart for his first team, and for Denver.

“We drove by some old places that we use to go eat,” Gray said. “We walked around the park and went to our old house. My wife (Jacklyn) and I just walked around a lot of old places we used to go. We just wanted to see it one last time and see if anything had changed and just pretend like it was just another day.”

Gray, who’s been on the injured list with a strained oblique since Aug. 2, won’t pitch again until September, so he won’t face the Rockies during the brief two-game series at Coors. He admitted he was kind of glad he wasn’t pitching against his old team in Tuesday night’s series opener.

“If it was a day three or four, for sure,” said with a grin. “Day one might be a little tough. Being back here for the first time and doing it, that might be too much of a distraction. But yeah, it would be fun (to face the Rockies).”

Gray’s first season with Texas has been mostly solid, but it’s also been marred by injuries, with three trips to the IL, including twice in April. He’s made 19 starts, going 7-6 with a 3.83 ERA.

“The first month was a little slow for me because there was a knee problem, but after that, I feel like I really got in a steady groove for the rest of the season,” Gray said. “Things were going really well until the oblique happened.

“I’m just trying to get back. I just want to be the same (as before the oblique injury).”

Gray conceded that it’s been easier pitching in Texas than in Denver’s mile-high altitude.

“It’s been different,” Gray said. “I haven’t had to make the changes of, ‘Oh, my ball’s doing something different today. How do I control it?’ I’ve been throwing the same way every day, every time in the same movement. I think that’s been the difference-maker.”

Gray used to have to tweak his approach when he pitched on the road after pitching at altitude, and vice versa. He no longer has to do that.

“Going road to home, home to road, there was always a little quick fix you had to do with some of your pitches or where you start things,” he said. “Just not worrying about that anymore and getting the same practice every day has been a big help.”

Kuhl’s deal. Right-hander Chad Kuhl, who was dealing with a right hip-flexor strain, rejoined the team Tuesday after pitching five scoreless innings in a rehab start for Triple-A Albuquerque on Saturday at Tacoma. Kuhl gave up just three hits and fanned six, but he walked four.

Kuhl will rejoin that starting rotation later in the week when the Rockies begin a four-game series in New York against the Mets. He’ll replace injured right-hander Antonio Senzatela, who’s out for the rest of the season with a torn ACL.

“My main goal is just to show that I can post up for 30 starts and be healthy and deliver really quality innings,” said Kuhl, who began the season hot but was struggling before he went on the injured list. He’s 6-7 with a 4.62 ERA and 1.524 WHIP.

Kuhl is scheduled to become a free agent at the end of the season and he’s leaving all of his options open, including possibly re-signing with the Rockies.

“It’s something that I’m trying not to dive into too much right now, but I have enjoyed my experiences here and I’ve really enjoyed the people in this (clubhouse),” he said. “If there is an opportunity to play here, I’m sure that will strongly be considered.”