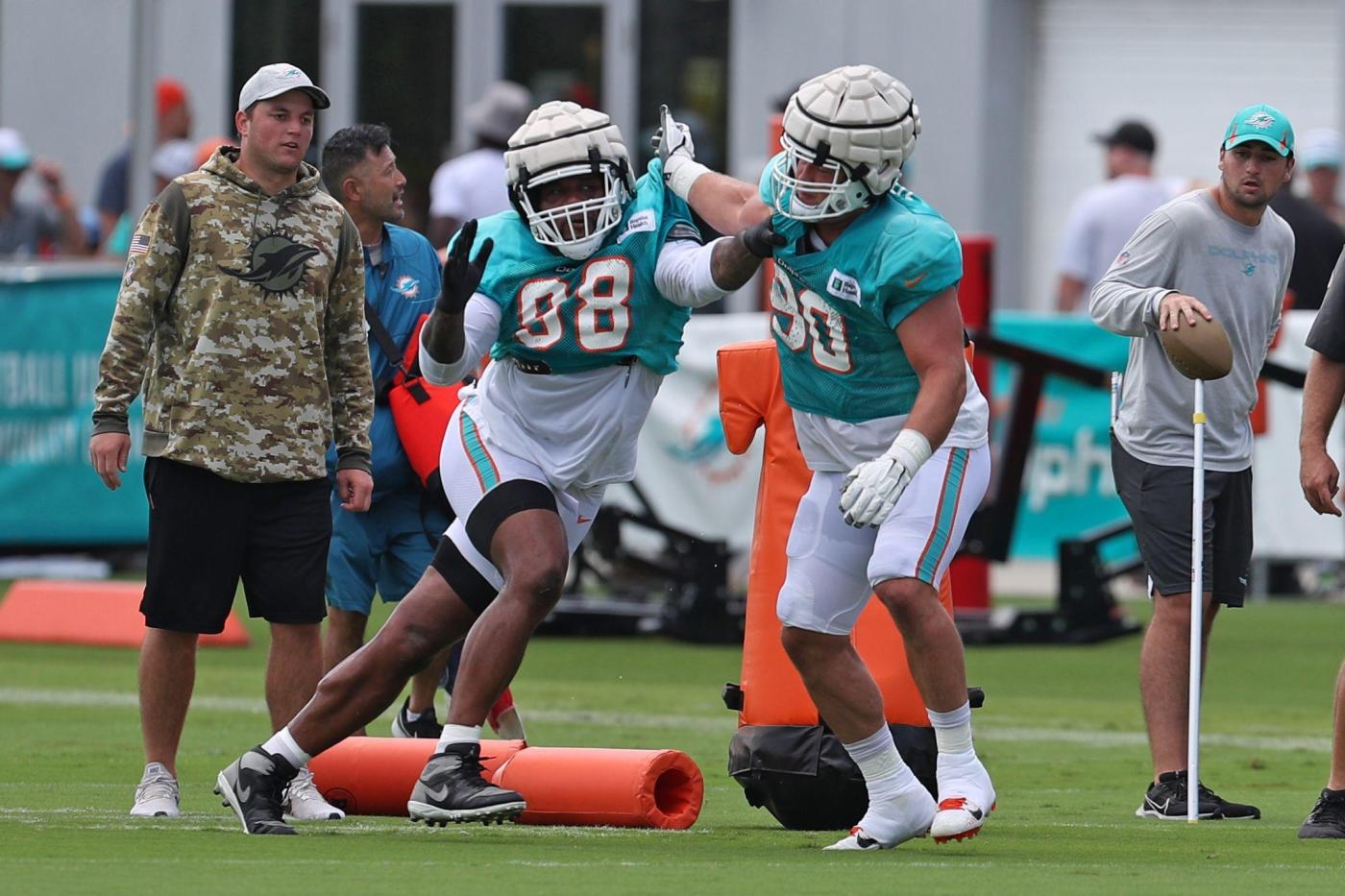 The Miami Dolphins have had three days of perfect practice attendance ahead of their opening game against the New England Patriots on Sunday, but they are not without injury concern.

The Dolphins had nine players who received a “limited” designation for their practice participation on Thursday, and the addition to that list after full participation in Wednesday drills was nose tackle Raekwon Davis.

Davis had a knee issue pop up on Thursday, but it wasn’t significant enough to keep him out of Friday’s session.

“There was a little something that we’re taking a look at,” said coach Mike McDaniel of his limitation Thursday. “We really think that we have enough good players on the team, so we don’t want to put a player out there that might not be able to do right. [We] wouldn’t be doing right by him if he wouldn’t be able to be full-go.”

Said Davis of what happened: “Just a little football, got rolled up on. That was about it. Nothing too big.”

Davis, the 6-foot-7, 335-pound defensive lineman was present with a compression sleeve on his right leg.

“We’ll see how he reacts [Friday] and make that decision then,” McDaniel said ahead of Friday’s practice. “It was something that kind of popped up [Thursday], and we’ll see how much the ramifications are after he gets movement [Friday].”

“I just tried to do the best I could do,” Davis said. “It’s feeling all right, getting better.

“Just taking it day by day. We’ll see what happens in the future.”

Last season, Davis suffered a knee injury in the opener at the New England Patriots and missed the following three games on injured reserve.

McDaniel was asked about the status of safety Eric Rowe with a pectoral injury and outside linebacker Andrew Van Ginkel, listed on the injury report as working through an illness after having his appendix removed nearly three weeks ago.

Decisions on each appear like they’ll come down to 90 minutes before kickoff when inactives are announced.

“Did coach [Bill] Belichick just give you those questions to ask?” McDaniel quipped. “I fully share as much as possible because I respect what [the media is] trying to do, but with regard to injuries, we’ll take it day by day. You can really stick to that ‘limited’ [on the injury report], and we’ll chew on that one, make it a game-time decision.”

Tackle Terron Armstead and outside linebacker Melvin Ingram were listed as limited for Wednesday and Thursday drills but only for veteran rest. Cornerback Nik Needham (quadriceps), fullback Alec Ingold (hamstring), running back Salvon Ahmed (heel) and rookie tight end Tanner Conner (knee) have also been limited both Wednesday and Thursday.

Additionally, the Dolphins are without starting cornerback Byron Jones, who will miss at least the first four games on the reserve/physically-unable-to-perform list after lower left leg surgery in the offseason.

The Dolphins will release injury designations ahead of Sunday’s game later Friday afternoon.

This is the new reward system for practice players of the week during the season with the orange jerseys from training camp now in the past, according to Deiter.

“It just meant we had some good practices,” said Deiter, who added the apparel was introduced to those rewarded at a team meeting Friday morning ahead of practice.

Deiter, who is the backup center behind Connor Williams after starting there last year and primarily playing guard previously, said he gets some sporadic work with guard techniques in case he ever has to step in. He added that Williams has done well with his snapping this week.