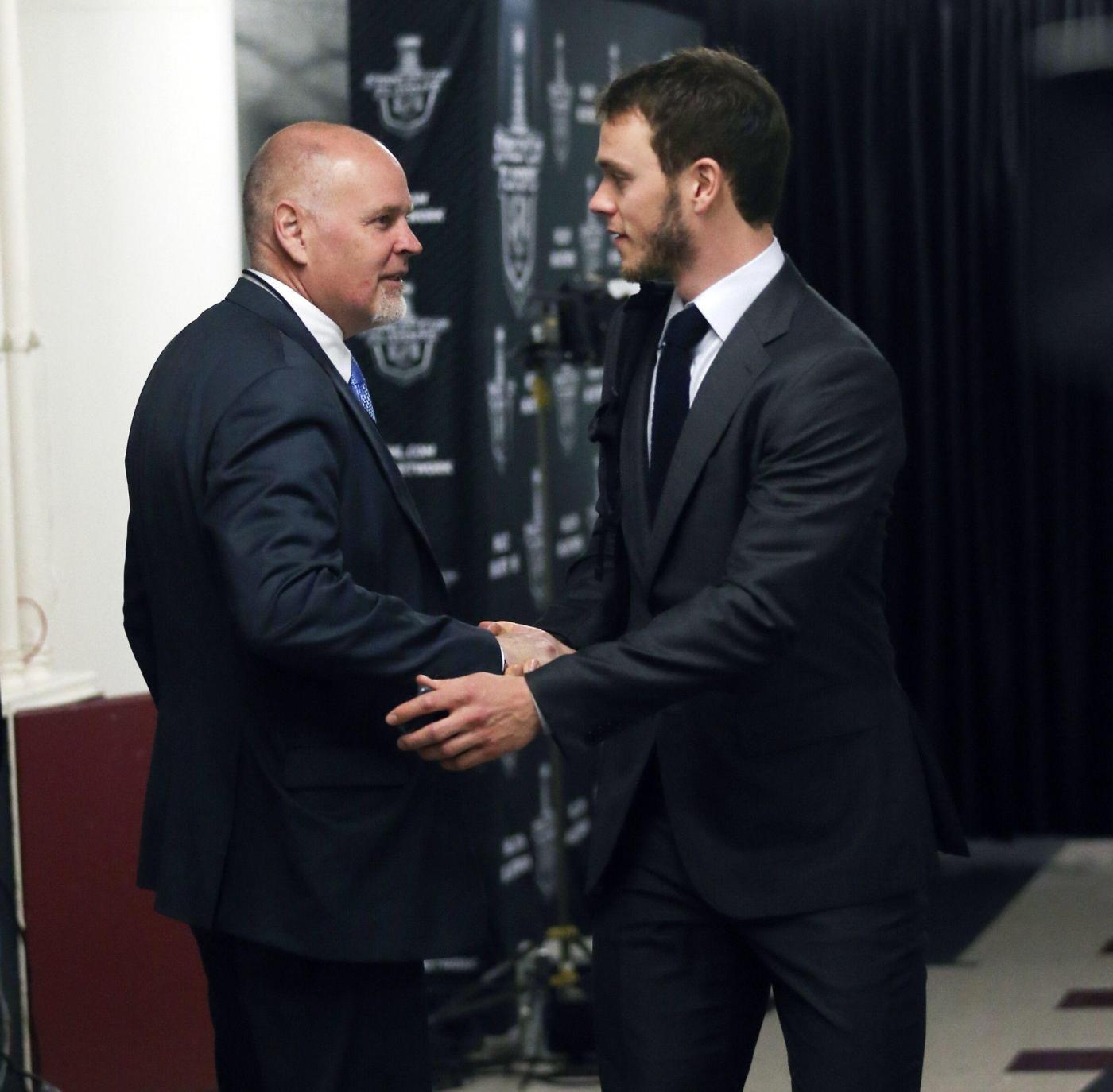 Both had been floated as candidates — Sharp in particular — once longtime analyst Eddie Olczyk surprised the Hawks by rejecting a long-term offer to return to the booth.

Sharp and Murray are former Hawks players who became fan favorites on TV and radio, respectively.

“Pretty much this was a no-brainer,” Jaime Faulkner, Hawks president of business operations, told the Tribune.

“We wanted to be thoughtful about making the decision for putting together this whole team, and we’re really excited about this new broadcast team of commentators and analysts because they’re going to represent the future of Blackhawks broadcasting.”

“Our broadcast team that we have in place — TV, radio and studio — combine for 1,400 NHL games played, so they know hockey,” Faulkner said. “Sixty years of broadcast experience, so they know broadcasting really well. And you’ll see people across the different channels as well.”

The Hawks can pitch “team” all they want — but it’s no secret the marquee belongs to Sharp and Murray. And Faulkner acknowledged as much.

“As soon as the Eddie announcement was made, there was a lot of speculation coming from social (media) — who was going to replace him and who people wanted to have sit next to Chris Vosters, and also through conversations with our season ticket members and some of our in-person events,” Faulkner said. “I think people were making loud and clear that they would love to see Troy and/or Sharpie sitting next to Chris.

“And we said, ’Well, great, we’ll give you those’ since we were already in conversations with them about doing work for us. Obviously Troy being with us anyway, it became a pretty easy no-brainer decision.”

Faulkner said she had been in talks with Murray and Sharp because — back when the Hawks believed they had a long-term deal with Olczyk — the team was trying to line up replacements for Olczyk when he was called to cover national games for TNT or horse racing for NBC.

Murray and Sharp will have about a 50-50 split of home and road games working with Vosters, who was named Pat Foley’s replacement as play-by-play man late last season.

Foley, Olczyk’s longtime partner, retired in April after serving as the Hawks play caller for 39 seasons. It’s no secret that even casual Hawks fans have grumbled about the loss of Foley and Olczyk in one offseason.

“We wanted to make sure we brought in some familiar faces,” Faulkner said of hiring Murray and Sharp.

She declined to divulge terms of either’s agreement, “but we are hopeful that this is a long-term solution for us.”

For Sharp, the hire marks a return to televised hockey coverage after a brief hiatus.

The three-time Stanley Cup winner was a full-time studio analyst for national games on “NHL on NBC” during the 2019-20 season — but that came to end after NBC Sports pulled out of bidding for national broadcast rights, which are now carried on ESPN and Turner Sports’ TNT and TBS.

Last season Sharp worked as an adviser to the coaching staff at his alma mater, the University of Vermont.

Sharp’s first foray into NBC Sports Chicago’s Hawks coverage came as a pre- and postgame analyst in October 2018, a few months after he retired as a player.

Murray boasts a long history of TV and radio experience covering the Hawks, dating to 1998, when he teamed with the late Chet Coppock as a studio analyst when Fox Sports Chicago hosted Hawks games.

Murray later replaced Dale Tallon in the booth in November 2003, covering games with Foley on Comcast SportsNet and WSCR-AM until the Hawks ended simulcasting in May 2006. That July, Murray formed a radio partnership with Wiedeman, a new hire from the New York Islanders.

Murray announced last August that he has cancer and took a hiatus from radio work until December.

Faulkner said Murray has been in good health.

“We plan on Troy doing all of our games,” she said.

Faulkner said Sharp and/or Murray might broadcast remotely on occasion: “If COVID (taught) us anything, it’s that technology is an incredible enabler.”

Sharp made his home life an “important” part of the negotiations, she said.

“We wanted to make sure for both Troy with his health and Sharpie with his family (that we) put something in place that worked well for them personally and well for the broadcast team as well as our fans,” she said.

The Hawks have to wait for the national TV schedule to be finalized before settling the details of who will cover each local broadcast.

Meanwhile, Faulkner plans to expand the Hawks’ involvement in podcasting, though she’s working out which broadcasters will be involved in that mix and to what extent.

“When we think about broadcast, it’s our podcast, it’s TV, it’s radio, our partners with WGN (AM), Univision and NBCSN, and then obviously our own podcast that we run, so our fans will get to see this group across all those different channels.”

Here’s how duties break down on TV and radio.

He’ll serve as play-by-play announcer, presumably for the whole season. Faulkner said he might share the TV booth with Murray and Sharp for the season opener, but that’s not a certainty.

He’ll provide TV color commentary, just like he already does on the radio and will continue to do.

“I think Troy brings familiarity with our fan base,” Faulkner said. “He’s best in class at what he does and absolutely an easy decision to move him into TV.”

”I think Patrick was fantastic in his national work,” Faulkner said. “He did a great job for us when he came on and covered some of our games. He brings a different perspective for our fans as well on Blackhawks hockey.”

He’ll return as studio host, which he has been since 2013.

Like last season, she could float between several roles.

“She was great on the radio last year, our fans loved her,” Faulkner said. “When Troy’s on TV, she’ll for the most part back up Troy on the radio.”

The former Colorado Avalanche defenseman will resume his jack-of-all trade duties, reporting during the game’s “between the glass” segments and doing studio and podcast work.

Like several others, he had spot duty in relief of Foley on TV, but he’ll return full time to radio.

A notable absence on the list is Jason Ross Jr., who became the first Black play-by-play announcer in Hawks history when he called a game in Las Vegas on Jan. 8. Ross also filled in for Weideman on the radio.

“The intent is for John to be in the seat most of the time,” Faulkner said. “We will work on giving some people just a few reps just so we’ll be prepared just in case we hit COVID or something happens. And we’re still working out who that will be.”

Faulkner teased a new wrinkles that likely will be added to Hawks’ game-night coverage.

Pregame, intermission and postgame shows on TV could feature a rotation of Blackhawks alumni — and not just in the studio, where Andrew Shaw often was a guest last season.

“Everybody is familiar with the success of the (Peyton and Eli) ‘ManningCasts,’ so in our mind, how great would it be to have a couple of our alumni at home sitting on their own couches commentating on the game,” Faulkner said. “Not play-by-play, not a formal and traditional broadcast, but being able to provide their point of view on players they know, what they see happening in a real entertaining and relaxed and fun setting.

“Those are some of the things that we would like to try to do this year. And we have a number of our alumni who would be interested in participating if we can pull that off.”

Panelists also will discuss the Rockford IceHogs and follow the progress of draft picks.

Since Faulkner was hired in December 2020, when Danny Wirtz was elevated to CEO, she has talked of modernizing how fans see games, whether it’s from their seats at the United Center or in their living rooms.

“We’d like to try different actual views, see what works, and how do we lay data and information over that,” Faulkner said. “Do we do different types of cameras that everybody’s seeing right now in the NFL, Major League Baseball and the NBA?

“So we’re going to try to test new technology with NBC (Sports Chicago). I think they’re as excited as we are to test some of these new things — see how our fans respond to them.”