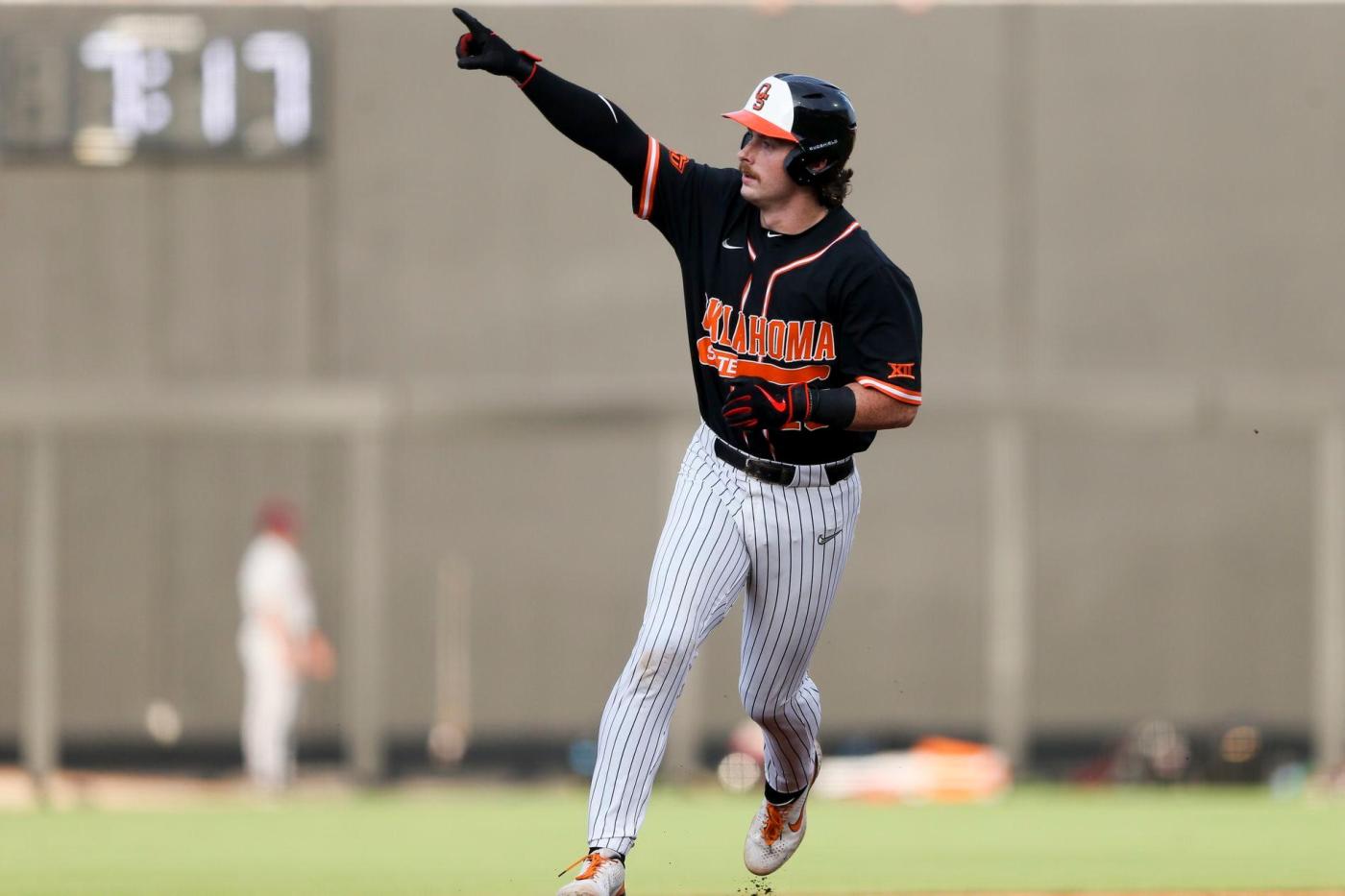 The Orioles opened the first day of the MLB draft the way they tend to always do under executive vice president and general manager Mike Elias — a focus on hitters with a combination of power and plate discipline. The highlight came with the first overall selection, drafting shortstop Jackson Holliday out of Stillwater High School in Oklahoma.

Baltimore followed Holliday with three college hitters, beginning with Cal junior outfielder Dylan Beavers with the 33rd overall pick in the Competitive Balance A round. Next came Clemson sophomore third baseman Max Wagner at No. 42 before the Orioles rounded out Sunday evening with Florida junior outfielder Jud Fabian with the 67th overall pick in the Competitive Balance B round.

But the approach shifted over the Orioles’ eight selections on the second day of the draft Monday. Baltimore selected a pitcher to begin the third round of the draft — the highest Elias has chosen a pitcher in his four drafts with the Orioles — and the Orioles continued from there with five arms taken out of their eight picks.

“I thought I’d never get asked that question from you guys,” Orioles director of draft operations Brad Ciolek joked when asked about all the pitchers selected. In the previous three drafts under Elias, Baltimore drafted four pitchers total in the first 10 rounds, although 2020′s draft was only five rounds.

“We’ve spent an extensive amount of time on pitching,” Ciolek said. “For whatever reason the last few drafts, the ball just didn’t bounce our way, and today it did on a number of fronts.”

All eight players Monday, and the final three Sunday, were taken from the college ranks, too. Ciolek said the Orioles “felt really comfortable with the college players available after selecting Jackson” Holliday with the first pick.

Here’s a breakdown of Baltimore’s selections from the second day of the MLB draft, with input from Ciolek on several of the players.

Skinny: The Orioles got a pitcher, although even this one can hit. McLean was a two-way player at Oklahoma State, although Baltimore announced him as a pitcher. His fastball-curveball combination are what scouts rave about most, and as a sophomore with the Cowboys, McLean struck out 39 batters in his 25 1/3 innings as a reliever. As a designated hitter or infielder, McLean hit 19 home runs with a .285 average. But his 36.9% strikeout rate seems to push him toward becoming a pitcher at the next level.

Ciolek’s take: “Nolan’s primary focus with us will be pitching. We think there’s immense upside with him as far as his arsenal is concerned and the ability to stretch him out once he gets acclimated to pro ball. With that said, we are going to give him the opportunity to DH. He does have prodigious raw power, plus raw power to all fields.”

Skinny: For the second time this draft, the Orioles took the son of a former major leaguer. Ardoin is the son of catcher Danny Ardoin, who played five years in the bigs and five games for the Orioles in 2006. Ardoin hit .271 as a redshirt sophomore for Texas this spring with 12 homers. In 2021, Ardoin was named honorable mention All-Big 12 after not committing an error throughout the season and throwing out 20 runners on 48 steal attempts.

Ciolek’s take: “He’s very refined defensively behind the plate. Ardoin has fantastic footwork, refined receiving skills and an above-average arm and accuracy. He’s shown the ability to handle the staff at Texas. We really like what he brings to the table as far as his defense is concerned, and he’s done well at the plate as well in the Big 12.”

Skinny: During his junior season, Bright went 5-4 with a 5.14 ERA while leading the Tigers in starts (17), innings (80 2/3) and strikeouts (94). His strikeout total was the most by an Auburn pitcher since 2000. Bright started off the 2022 season strong by not allowing an earned run in his first three starts, and in the College World Series he struck out eight batters in Auburn’s win over Stanford on June 20. It was the program’s first College World Series victory since 1997. As a sophomore, Bright won four games in 19 appearances (11 starts) and was tied for second on the team with 43 strikeouts and third in innings pitched (49).

Ciolek’s take: “All these guys have weapons that they can utilize to both sides, both against left-handed and right-handed hitters, and we’ll look to fully maximize that arsenal.”

Skinny: Hodo had an impressive season this past spring, as he hit .319 with 10 home runs and 47 RBIs in 69 games. During a game against Baylor in April, Hodo went 3-for-4 with a home run and four RBIs. He was named honorable mention All-Big 12 after hitting .281 with five home runs and 44 RBIs in 64 games as a redshirt freshman, and in high school, Hodo finished second in Texas high school baseball history with 106 career stolen bases. Hodo’s father, Doug, was a starting outfielder on the 1983 Longhorns’ College World Series team before playing minor league baseball in the Phillies’ and Braves’ organizations.

Skinny: After pitching exclusively in relief for the Bulldogs in 2021, Johnson, 22, transitioned to the rotation this past spring and started 13 games, going 3-4 with a 5.47 ERA with 117 strikeouts in 79 innings against strong Southeastern Conference competition. As a junior, he appeared in three games during last year’s College World Series for Mississippi State, allowing two earned runs on six hits and striking out 12 batters to help the Bulldogs win the NCAA championship. Before Mississippi State, he pitched at Hinds Community College in Raymond, Mississippi, for two seasons, and he had a 1.80 ERA in four starts during the 2020 season after leading Hinds in games started (11) and strikeouts (70) in 2019.

Skinny: The Orioles select a second straight right-handed pitcher and their fourth of the day with Weston. Ranked by D1Baseball.com as a top-five draft prospect in the Big Ten, Weston started 11 games for Michigan last season, but his batting average against worsened from .226 to .281 while his ERA rose from 2.81 to 4.74 this past spring compared to 2021.. However, Weston, who is from Canonsburg, Pennsylvania, and has the option to return to Michigan for his senior season, struck out batters at a much higher rate, punching out 92 this past season compared to 68 in 2021, despite fewer innings pitched this spring.

Skinny: Crampton was born in Taiwan and played in the 2016 Olympics for Japan. Raised in Oakland, California, Crampton stayed close to home and played at Stanford, where he hit .316 this spring as a junior. Crampton started 65 games for the Cardinal and had 40 RBIs and a .395 on-base percentage. He struck out only eight more times than he walked. Crampton is especially regarded for his defense. Playing shortstop, he was named the 2022 Pac-12 Defensive Player of the Year.

Skinny: Cheney, from Bertram, Texas, started his college career at Oklahoma State before transferring after the 2021 season to McLennan Community College, where he turned his career around by going 10-3 across 15 starts and 16 total appearances. He struck out 122 batters in 81 2/3 innings and finished the 2022 season with a 3.20 ERA. Cheney is committed to play for Texas if he does not sign with the Orioles. He’s the fifth pitcher selected by Baltimore on Monday and the eighth college player in as many picks.

Ciolek’s take: “He has a unique fastball profile that we look for. He has elite hop on his fastball and a pair of breaking balls that play immensely well. We’re really excited about getting him, kind of homing in on his arsenal. We think the fastball and breaking ball combo will be successful as far as changing the eyesight of hitters, and we’re also going to continue to work on a changeup with him.”