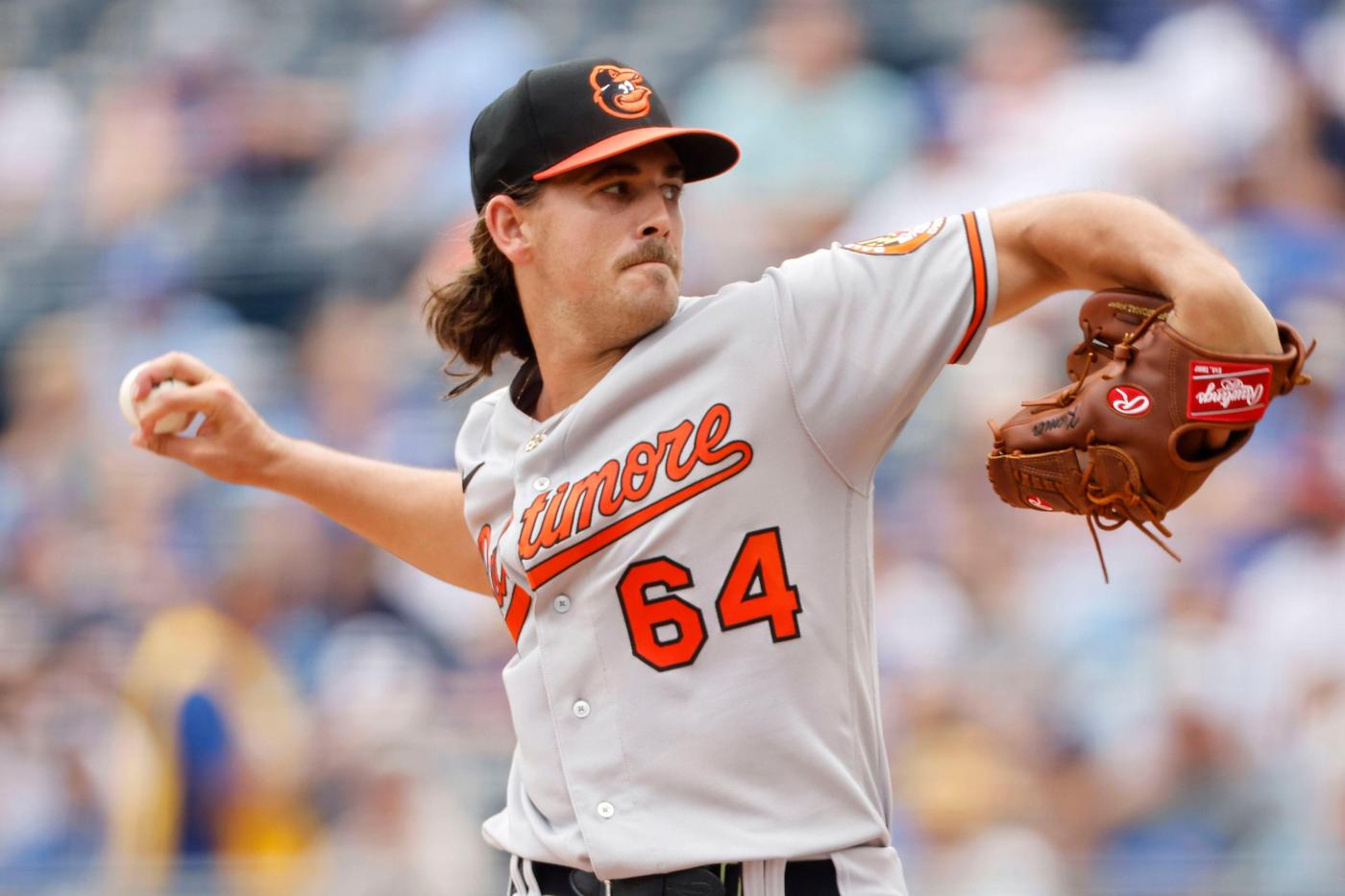 There was a hint of a smile as Anthony Santander rounded first base, and it wouldn’t be the last one the Orioles would flash Sunday at Kauffman Stadium. The ball had leaped off Santander’s bat, flying an estimated 455 feet and ending with a splash into the fountain beyond the right-center fence.

The emphatic crack of the bat was an early indication of what was to come for Baltimore in the series finale against the Kansas City Royals, breaking out at the plate to even the four-game series at two games apiece. After Santander’s blast, a four-run second inning continued the offensive eruption in a 10-7 victory before a flight to Toronto.

So frequently this season, the bullpen has held a game in check after a spotty performance from a starter. The reverse happened Sunday, with five of the six Kansas City earned runs coming off relievers, although the offense pushed the contest far enough out of reach to weather the Royals’ comeback attempt.

The first misplay came from shortstop Richie Martin in the sixth inning, rushing a throw to second base as he tried to double off Bobby Witt Jr. Instead, the throw wound up in right field, and Witt, selected No. 2 overall after Adley Rutschman in the 2018 draft, blazed around the bases to get Kansas City on the board.

The second mistake came two innings later, with third baseman Tyler Nevin bobbling an opportunity to end the inning by turning two. Another run scored on the play.

The error from Martin ended Kremer’s outing two batters into the sixth inning, but he still worked deeper than last week’s start, when he lasted 4 1/3 innings in a loss to the Cleveland Guardians.

In that outing, a changeup left over the zone was his lone mistake, resulting in a three-run bomb in the first inning. Hyde wanted Kremer to avoid the big inning, and that’s what he did best Sunday — allowing four hits and two runs (one earned) while striking out two and walking two to lower his ERA to 3.86.

“I think my stuff was a little better last time,” Kremer said. “But grinded through those first couple innings, kind of settled in and my stuff came back. So, solid.”

He had ample run support, too. Royals right-hander Brad Keller was chased after just 1 2/3 innings, as he allowed long balls to Ryan Mountcastle and Rougned Odor before singles from Cedric Mullins and Austin Hays brought another two runners home.

Kremer’s season was put on pause before it began when he suffered an oblique strain while warming in the bullpen during the season-opening series with the Tampa Bay Rays. The offensive outburst behind him helped take pressure off him in his second start since returning.

“You can’t complain about the offense putting up 10,” Kremer said. “It’s a lot more relaxing pitching with a good lead.”

That lead didn’t aid the bullpen, however.

With left-hander Keegan Akin in as relief in the sixth, Hunter Dozier launched a two-run homer. And an inning later, Akin gave up a solo shot to Michael A. Taylor. Akin, pitching for the first time since June 4, had given up two homers in 35 2/3 innings this season before the three he allowed in two innings Sunday, with Witt joining the barrage.

“Keegan’s gonna fill the strike zone up, he’s going to be aggressive,” Hyde said. “Hitters know that, so he just has to make a little better quality pitches. That was unlike him.”

Right-hander Bryan Baker allowed two more runs before right-hander Félix Bautista ended a two-run eighth. It was a frustrating sequence for Hyde, who watched as his bullpen twice allowed a seven-run lead shrink to uncomfortable margins. He needed to turn to left-hander Cionel Pérez for a save — an almost unthinkable necessity when the Orioles led 7-0 in the sixth inning and 10-3 in the seventh.

But the early firepower from Santander — coupled with the late add-ons — created enough cushion, one that covered for a shaky bullpen to split the four-game series.

“We did let them back in the game,” Hyde said, “and made that game closer than it should’ve been.”

The error from Martin in the sixth inning momentarily marred his day, setting the Royals up for a three-run frame. But in the top of the seventh, Martin made amends with a blast to the left-center wall for his second triple of the game.

“I love triples,” said Martin, who figured the last time he had two triples in a game would’ve been during high school or travel ball.

That latter triple scored two runs, and Mullins — the last Oriole to hit two triples in a game in September 2020 — plated Martin moments later with a base hit.

Martin has been in the organization since the Orioles selected him in the 2018 Rule 5 draft. The former first-round pick played 120 games in 2019 and 37 in 2021, and he received a call-up to join Baltimore on Friday night.

This year has been his best yet at the minor league level, batting .294 for Triple-A Norfolk. And through two games, Martin has continued that success at the dish, going 4-for-9 between the two games. His defensive versatility offers much of what the Orioles liked about Chris Owings, although there’s the potential for more offensive upside.

“Just continuing to work and trusting in my preparation and the process,” Martin said. “I’m just trying to take things one day at a time right now. That’s all I can do.”

>> The Orioles placed Owings on unconditional release waivers, ending his time with the team. Owings struggled at the plate for Baltimore, hitting .107 before he was designated for assignment last week. The veteran offered more defensively, with the utility ability to play in the outfield or in the middle of the infield.

>> The Orioles signed shortstop Chris Givin to a minor league contract, adding organizational depth and assigning the 25-year-old to Double-A Bowie. Givin had been released by the Double-A affiliate of the San Diego Padres on May 31 after hitting .239 in 29 games.