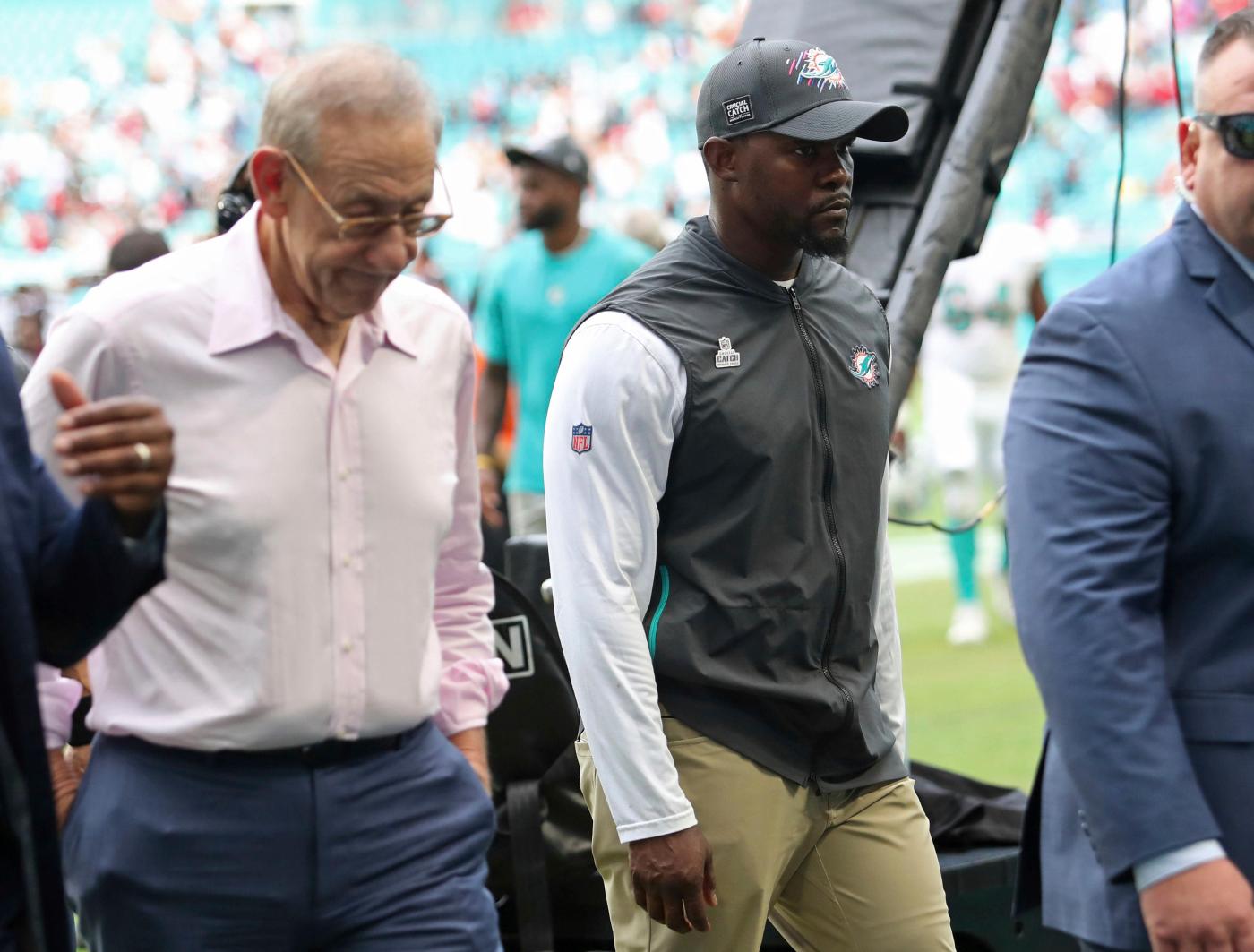 The Miami Dolphins have been stripped of two draft picks, including a 2023 first-rounder, and owner Steve Ross is suspended through Oct. 17 and fined $1.5 million after the NFL announced findings following independent investigation of policy violations.

The NFL’s release on Tuesday announced that, while the team did not intentionally lose games — or tank — during the 2019 season, Miami had “impermissible communication” with quarterback Tom Brady between 2019 and 2020, while he was with the New England Patriots.

The six-month investigation, led by former U.S. Attorney and SEC Chair Mary Jo White, looked into allegations made by ex-coach Brian Flores as part of a class-action lawsuit filed in the aftermath of his firing from the Dolphins.

The Dolphins must forfeit their own 2023 first-round pick. They still own one from the San Francisco 49ers. Miami also is stripped of a third-round selection in the 2024 draft.

During Ross’ suspension, he may not be present at Dolphins’ facilities and may not represent the club at any team or NFL event. Ross may not attend league meetings prior to the Annual Meeting in 2023 and is removed from all league committees indefinitely.

Bruce Beal, Dolphins’ vice chairman and limited partner who is in waiting to buy the team from Ross, may not attend league meetings for the remainder of 2022 and was fined $500,000.

Flores’ most damning claim against Ross in his lawsuit was that he offered him $100,000 to lose games in 2019, Flores’ first season at the helm. The investigation found “differing recollections about the wording, time and context.”

The investigation, however, did find tampering violations with Brady. It stated that communication between the Dolphins and Brady began in August 2019 and continued through that regular season and postseason.

“The investigators found tampering violations of unprecedented scope and severity,” NFL commissioner Roger Goodell said in a press release. “I know of no prior instance of a team violating the prohibition on tampering with both a head coach and star player, to the potential detriment of multiple other clubs, over a period of several years. Similarly, I know of no prior instance in which ownership was so directly involved in the violations.”

Ross reacted to the league’s findings with a statement Tuesday.

“The independent investigation clears our organization on any issues related to tanking and all of Brian Flores’ other allegations. As I have said all along these allegations were false, malicious, and defamatory, and this issue is now put to rest,” Ross said in a statement.

“With regard to tampering, I strongly disagree with the conclusion and the punishment. However, I will accept the outcome because the most important thing is that there be no distractions for our team as we begin an exciting and winning season. I will not allow anything to get in the way of that.”

Flores’ lawsuit was filed with the intention of exposing what he feels are racial inequalities in hiring practices for coaches in top positions in the NFL. He claimed his resistance to Ross’ request, in a season where the Dolphins had a chance at the No. 1 draft pick if they kept losing, played a part in his firing following the 2021 season.

In 2019, Flores led a team largely void of talent to five wins, which resulted in Miami ending up with the No. 5 pick in the 2020 draft. The Dolphins used the selection to draft quarterback Tua Tagovailoa. Flores had back-to-back winning seasons the following two campaigns, which made the move by Ross and the Dolphins to fire him on Jan. 10 a bit of a surprise.

Flores was then expected to be hired for another NFL head coaching vacancy this offseason, but several teams passed. He described, in his lawsuit, feeling like he went through a sham interview with the New York Giants, a notion sparked by a mistaken congratulatory text from New England Patriots coach Bill Belichick, who meant to send the message to his other former assistant coach named Brian, Brian Daboll. Daboll, who was previously Buffalo Bills offensive coordinator, landed the Giants job.

Goodell has previously stated he cannot simply remove an owner, as he said regarding Washington Commanders owner Daniel Snyder over ongoing scrutiny into the organization’s workplace culture and accusations from female employees of pervasive sexual harassment by team executives.

Ross has owned the Dolphins since 2009. Should he sell the team, Bruce Beal, a New York real estate executive and current Dolphins vice chairman and partner, has the contractual right to acquire the team.