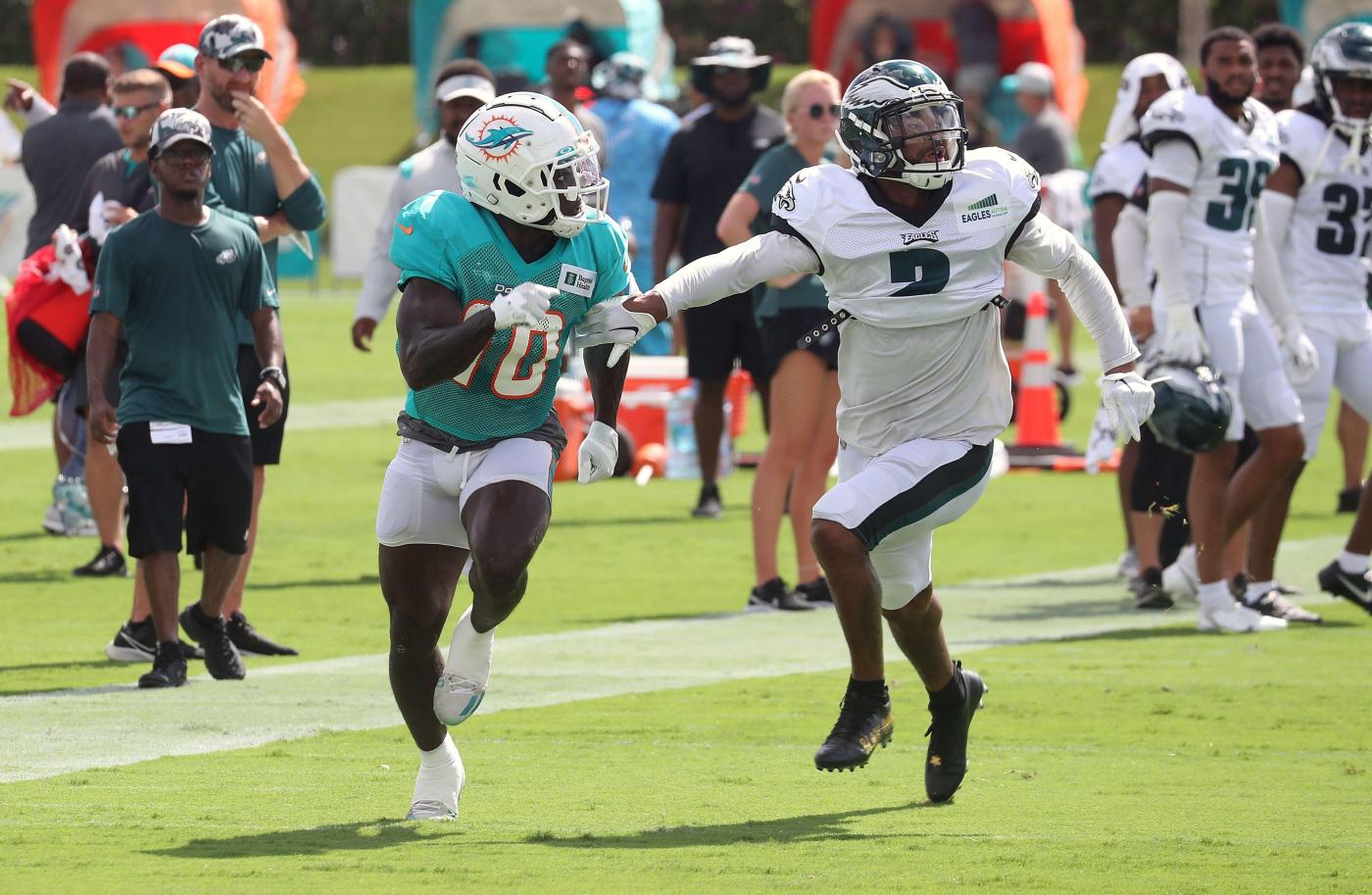 On the one hand, Dolphins receiver Tyreek Hill was the star of the day. He ran away from Pro Bowl cornerback Darius Slay in the first one-on-one drill Wednesday and confirmed during the larger scrimmage the electricity he brings.

On the other hand, this Dolphins offensive line struggled again, as if we’re drifting back to the line-less nightmare of 2015. Or 2012. Or 2007. Or, well, pick a year, almost any year, in the past couple of decades. Bring some aspirin, too.

There’s the Dolphins offense in two parts in late August. Everyone is fixated on quarterback Tua Tagovailoa — for good and obvious reason. He’s the centerpiece. He’s the reason the Dolphins tanked in 2019 and sacrificed three seasons. He’s in a prove-it season to not just be good, but on the road to great for this grand plan to succeed.

This offseason was about getting Tagovailoa enough parts to let his game matter. And there’s a mixed message of how that looks heading into the season. Right now, you see the speed that can run away from everyone and the line that can’t be ignored by anyone.

These issues are married in many ways, too. To take full advantage of Hill and his speedy partner, Jaylen Waddle, the Dolphins need this line to be serviceable. Not great. Not even good, if it comes to that. But average. Functional. Can it get there?

Because there was Hill running free and easy Wednesday, showing what this offense can be. He and Tua connected for a few medium-sized passes in the scrimmage with the Eagles, the exact kind of passes Tua didn’t complete with lesser receivers, the kind Hill has made a career of making.

“Teams aren’t going to be able to cover 10 and 17,” Dolphins tackle Terron Armstead said, referring to Hill and Waddle.

Waddle missed Wednesday due to some nagging injury. But you can see the dynamic fun this offense will have if Tua’s allowed to pull all the levers. The concern came in the one-on-one drills, as Philadelphia bullied the Dolphins’ line too much.

It’s still the practice portion of the summer. Philadelphia, again, has a top-10 defensive front. So these practices are one way to improve, and Dolphins coach Mike McDaniel no doubt knows this has to improve for his offense to work.

Wednesday’s test only reinforced this further. While Tua couldn’t be hit and was throwing freely to receivers, the first two runs by Raheem Mostert went nowhere. That’s how it went too much of the day, too unless you count …

… Right tackle Austin Jackson struggling once or twice — OK, maybe a few times — against an edge rusher like Haason Reddick.

The best running play? A fake up the middle and pitch to Hill running behind Tua from his receiver position. That went for 12 yards. There’s the speed again to elude defenses.

The as-advertised rock of the line is Armstead. He manhandled whoever was put in front of him. As long as he’s healthy this season, this line has a solid foundation.

We’re still in the learning-curve portion of the summer for the rest of the line, from Jackson moving to right tackle, Connor Williams moving to center and Eichenberg moving to left guard. These are new positions to learn as well as a new offense. McDaniel and Tua say not worry about the running game. Fullback Alec Ingold went further.

“We’re going to have a smashmouth, physical run game, and those guys are going to bring the speed, and we’re going to mesh well,” Ingold said. “Hopefully I can open some things up for them. That’s why I’m here. I’m here to serve everybody else on this offense. Hopefully I can do that for the passing game as well.”

Could Ingold be the X-factor to move the needle? It’s August, a time to be open to any idea. Philadelphia’s strong defense underlined how this Dolphins line needs to improve, though.

Hill showed for another day how this offense can be dynamic. This line showed how far it stands from getting there. It’s still August, a time for feeling good and optimism. But September’s realism looms.