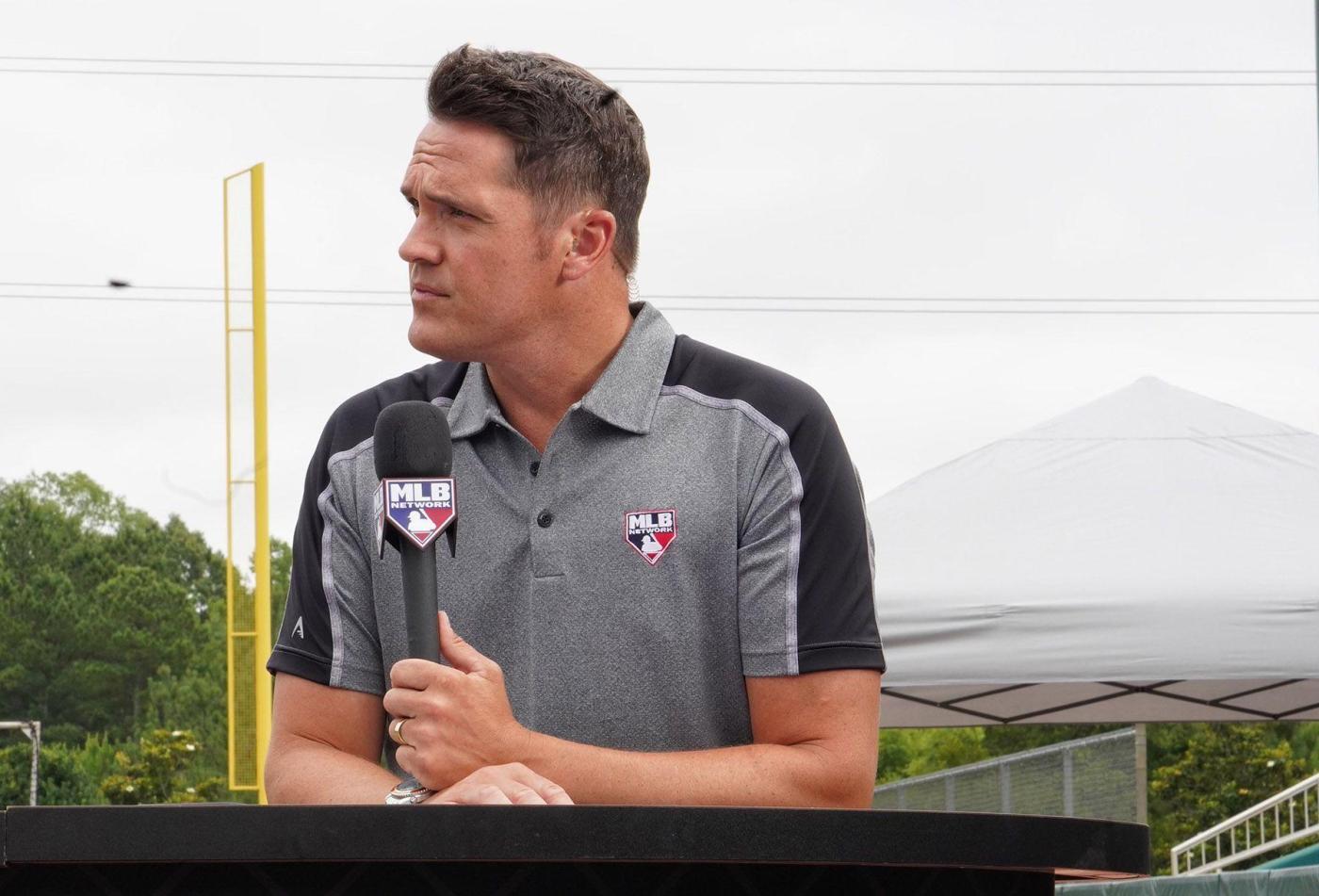 Greg Amsinger’s first year hosting MLB Network’s coverage of the league’s draft lacked suspense, at least in the terms of the No. 1 pick. That isn’t the case with what the Orioles will do in that spot this year.

In 2009, San Diego State right-hander Stephen Strasburg was the top player available by a hefty margin, and the Washington Nationals selected him first overall in a move that shocked no one. But there’s no guarantee the same will be true after the Orioles make their second No. 1 pick in four years Sunday.

The bevy of options excites Amsinger, who looks forward to being able to ask the analysts on MLB Network’s coverage who they would take with the No. 1 pick.

“When there is any kind of suspense, it’s more fun for the host,” Amsinger said, “because you don’t know what’s coming next.”

But Amsinger thinks he knows what the Orioles will do with what he believes will be their last No. 1 selection for some time, with Friday’s 5-4 loss to the Tampa Bay Rays ending a 10-game winning that moved Baltimore into wild-card contention with American League East foes in the Rays, Boston Red Sox and Toronto Blue Jays, though all four teams are well behind the New York Yankees.

In a conversation with The Baltimore Sun, Amsinger discussed the Orioles’ turnaround, their rebuild and what they’ll do with the No. 1 pick. Questions and answered have been edited for brevity and clarity.

Obviously, the Orioles are on quite a run. What stands out to you about how they’re playing of late and how they’ve played this whole season?

Couple things. Since Adley Rutschman’s been called up, they’re over .500. This is reminiscent to me of Buster Posey circa 2010, this rookie catcher that comes up that has natural instincts, that understands connecting with his pitcher, whether it’s a starter or a reliever. He really is a young leader, wise beyond his years, and I’ve seen a lot of similarities when I covered Buster Posey in 2010 to what I’m seeing now with Adley Rutschman.

The other part of the Orioles’ success, at the end of the day, look at their home record. This is a team that here we stand, mid July, they’re 25-17 at home. A couple of years ago, they got off to a terrible start at Camden Yards. [The Orioles lost 41 of their first 58 home games in 2021.] You’re not going to outslug the powers of the AL East, the Yankees and the Red Sox and the Blue Jays. You’re not outslugging them, so when they were criticized for moving that left field wall back, at least they were doing something to give their team — in their market, with their roster, which was assembled by them — a chance. I love the outside-the-box thinking. It wasn’t popular at the time, but it’s clearly worked. They built a ballpark that fits their roster, and here they are, above .500 at home, and they’re in the mix for a wild-card spot. It’s awesome.

You mention the wild-card positioning. You mention 2010 and Buster Posey. That San Francisco Giants team obviously won a World Series. Do you think this Orioles team has that kind of a run in it?

I don’t, and the only reason I say that: The core of this Oriole team is still considerably young. And while I did connect Adley Rutschman to Buster Posey, when I go back to 2010, that Giant team was veteran-laden, a group of guys that had been there, done that before. To me, it’s not the same thing. The pedigree is a little different, but this is clearly a step in the right direction.

They, to me, are ahead of schedule. I did not think Adley Rutschman would sniff, A, being this close to the wild card before the All-Star break, B, in his rookie year, hearing his organization being a potential buyer at the trade deadline. I didn’t think that would happen his first two years, so to me, they’re ahead of schedule. I would love to see the Orioles add two bats. That would be so exciting to watch. And if they did, who knows, but I think the fans of Baltimore deserve an exciting trade deadline.

Like you said, it’s a young team. They have other prospects coming. What do you make of where they stand now and this rebuild as a whole?

Well, they’re gonna get another great draft pick, the No. 1 overall selection. They’re building a championship team up the middle, and that’s very important. [Orioles executive vice president and general manager] Mike Elias is a smart guy. Got a chance to hang out with him at the MLB draft combine, and he couldn’t get enough of that event. As a matter of fact, of all the front office executives that I had a chance to mingle with, he stood out to me and [fellow MLB Network host] Harold Reynolds of soaking in all of it. He loved all the access to the players. He loves seeing them up close, showcasing their athleticism. This guy, he’s a sponge. He wants to know as much as he can. I love the guy.

If I’m a fan of the Orioles, with what I’ve seen from Mike Elias, I’m excited for the future of this organization. He gets it, and I’m expecting the No. 1 to be can’t-miss, and you can’t mess this up. The reason I say that: They’re not going to get the No. 1 pick for a while. This team’s in the right direction. They’re not going to be in this spot again under Mike Elias.

This pick will be extremely important when you look at this team in three to four years from now because I believe the guys that are in the mix to be No. 1 could help them in three to four years and be central casting as part of the core of an Oriole playoff team that’s playing in the American League Championship Series. That is how exciting this young core is in Baltimore.

What stands out to you about this draft class, especially at the top?

Druw Jones is special. Of all the naturally gifted players that look like they’re in slow motion — when I saw Juan Soto for the first time, I couldn’t believe a 19-year-old can make the game seem so slow, then I watched Druw Jones, and I’m like, ‘This kid’s been slow since he was a sophomore.’ Like, the game looks boring to him. Jackson Holliday has all the instincts of Bobby Witt Jr. Those are the connections I make. I know he’s a left-handed bat, but I see so many similarities there.

The guy that I’m most excited about — I’ve seen a lot of drafts now. This is my 14th draft. Termarr Johnson has the best bat-to-ball skills I’ve ever seen for a potential draftee. I’ve never seen any youngster who has the ownership of a bat the way he does. He is an expert at hitting, and he’s young. His favorite player is Robinson Canó, and you see that in his swing, but he’s not as large as Robbie Canó. This is the closest thing we’ve seen to Joe Morgan. He’s gonna play second base. He’s 5-9. He’s gonna hit 25 to 30 home runs. He’s a slugger. He’s going to win batting titles. He’s a perennial All-Star.

If I had the No. 1 pick — and I know Druw Jones, Holliday, they’re No. 1 talents — I would take Termarr Johnson. He, to me, is so can’t-miss. He can be an All-Star in year one. He’s a Julio Rodríguez special kind of talented, man. If I’m an Oriole fan, I’m excited at the options that we have at No. 1.

What do you think Mike Elias will do?

I think he goes with the center fielder. I think you’re gonna build a championship team up the middle. While I love Termarr, he’s a second baseman, and you can find other bats there. I will say the kid can play short, and he’s got the athleticism to do that. … But Druw Jones, I’m sorry, he’s ahead of where his dad was. His dad was playing in the postseason at the age of 19. That’s how special Druw Jones is. You can’t pass up on that. Bloodlines matters to me, they do, and when you’ve been in a big league ballpark your entire life since you were in a Pull-Up, you have a mental, psychological advantage over other kids. I would take Druw Jones. I think Mike Elias is gonna take Druw Jones, and you’re gonna look at Andruw Jones a shade better.

To me, the negotiations and pool money will really come into play. We saw that last year. We’re gonna see it again this year. So whoever gets the good deal, and then you can reallocate some funds to other picks, it’s gonna be important. But when it comes to No. 1, I don’t see the Orioles playing that game. They’re going to make sure they get a deal with the best available talent. I think it’s going to be Druw Jones. I think Druw Jones will go No. 1 to the Orioles.