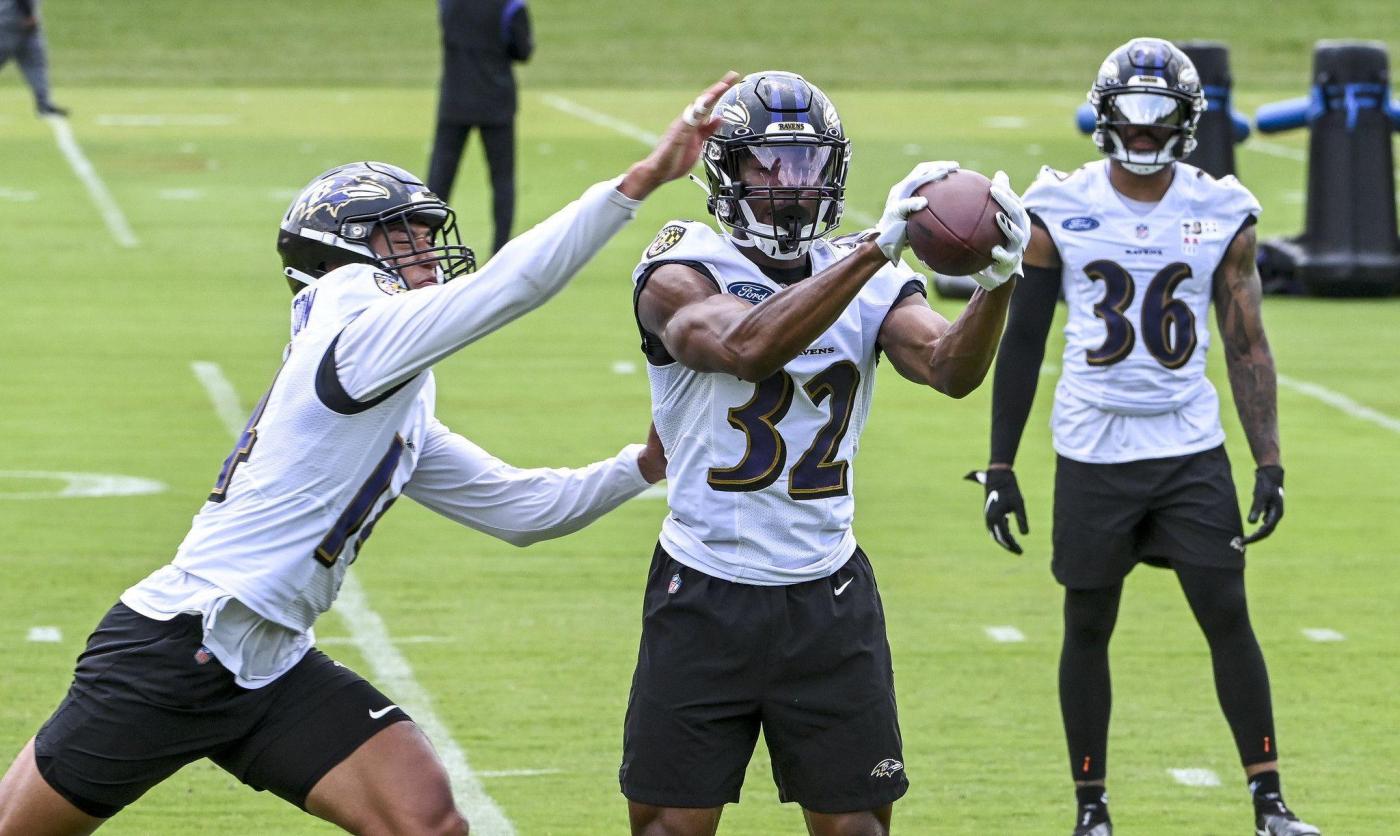 Nearly a year ago, the personnel was in place for the Ravens to make a deep push into the NFL playoffs.

The roster hasn’t changed much since then, but there are a lot of questions concerning top players returning from injuries and several young ones who could make significant impacts.

That should make training camp, which begins in a little less than a month, very interesting.

“We’ve got a lot of work to do, obviously in all areas,” coach John Harbaugh said.

So today, we’ll take a look at some of the top positional battles of training camp, which begins July 27 with a full-field practice for rookies and veterans:

If both perform up to par, then third-year player J.K. Dobbins will remain the starter and Gus Edwards, in his fifth season, has the No. 2 position.

The concern is that both are coming off major knee surgery that forced them to miss the 2021 season. So, Harbaugh has to see which one performs better and whether either has a setback in the preseason.

The Ravens would like to get similar production from the 2020 season when Dobbins had 805 rushing yards on 134 carries and Edwards produced 723 yards on 144 attempts.

Fourth-year player Justice Hill was just as effective as Davis in the OTAs, but the top pass receiver out of the backfield was rookie Tyler Badie, a sixth-round selection out of Missouri. Hill can play special teams, which might make him more valuable than Davis and Badie, but the Ravens might be able to stash Badie on the developmental squad.

The competition will be stiff, but so are the candidates.

Third-year player Tyre Phillips is the most athletic of the prospects, who include Ben Powers and Ben Cleveland, but his progress has been slowed by his own versatility, which has enabled him to play other positions when called upon, and injuries.

Powers, in his fourth year out of Oklahoma, started to play well by the end of the fourth offseason minicamp and seems to know the offense better than Phillips.

Cleveland is a wide body who is good at moving the pile in the running game, but is slow and has poor knee bend in pass protection. The Ravens have struggled at this position for three or four years.

A lot will depend on whether Pro Bowl performer Ronnie Stanley can return to the left side after struggling with a major ankle injury the past two seasons.

If Stanley returns, Morgan Moses, obtained from the Washington Commanders during the offseason, will start on the right side, giving the Ravens better athleticism than a year ago.

If not, then the Ravens have several options, but the talent level drops without Stanley. The Ravens flip-flopped Moses and Ja’Wuan James on the right and left sides during the minicamps, but the best technician might be undersized backup guard Patrick Mekari, who can play any position on the line.

Regardless, the Ravens have improved in a position that contributed heavily to the team-record 57 sacks a year ago.

The Ravens want to duplicate their success of 2019 when quarterback Lamar Jackson had a Most Valuable Player season throwing to tight ends Mark Andrews and Hayden Hurst.

The Ravens already have one of the NFL’s best in Andrews, a fifth-year player, but now have to find a tight end to complement him. The Ravens drafted two rookies in the fourth round in Isaiah Likely (Coastal Carolina) and Charlie Kolar (Iowa State). Likely, at this point, appears to be a better blocker and Kolar more of a receiving threat, but the Ravens don’t want to become predictable.

They also have veteran Nick Boyle returning from recurring knee problems; Boyle has lost significant weight, which might hurt his run blocking, which had been his forte.

It has yet to be determined how much the team will use Pro Bowl fullback Patrick Ricard, who agreed to terms about three months ago on a three-year contract reportedly worth about $3.75 million per season.

On March 17, veteran Michael Pierce agreed to a three-year contract with the Ravens worth a reported $16.5 million, but he was a no-show at all four offseason minicamps, the last of which was mandatory.

Harbaugh cited a personal matter involving family for Pierce’s last absence, but he is the X-factor in run defense. If he comes to training camp in shape and ready to play, that would take a lot of pressure off inside linebackers Patrick Queen and Josh Bynes.

If not, then the Ravens will have to count on rookie Travis Jones, a third-round pick out of Connecticut. Jones is versatile and can be a force inside as a pass rusher, but he needs to be in better shape than he showed in those minicamps. There is no Army or Holy Cross on the Ravens’ 2022 schedule.

This position will be fun to watch because the Ravens have as many as six on the roster. But, two are definitely going to play a lot because they got big money. One is Marcus Williams, signed from the New Orleans Saints in March to a five-year, $70 million contract, and the other is Kyle Hamilton, the team’s top pick out of Notre Dame in April.

The interesting part is who plays where at various times because the Ravens can use Chuck Clark, a starter last season, as the nickel in certain passing situations or they can insert Brandon Stephens or Tony Jefferson II or Geno Stone inside in dime packages. Who knows, the Ravens might even use cornerback Marlon Humphrey as a safety in certain packages.

Heading into training camp, the Ravens have the element of surprise, but they can also be surprised if key players don’t return healthy from injuries.