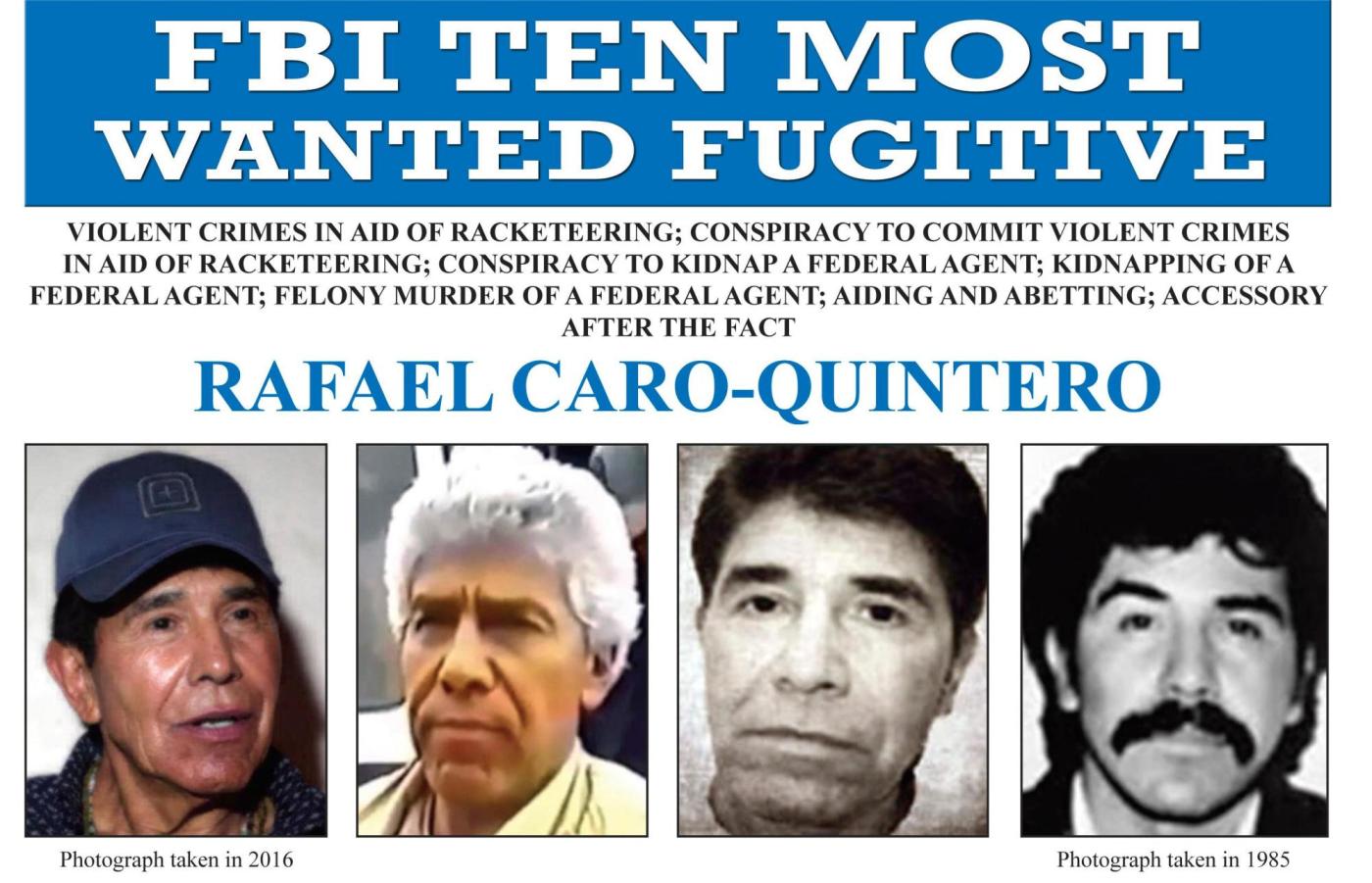 By MARÍA VERZA and MARK STEVENSON

MEXICO CITY (AP) — As Mexican marines closed in on infamous drug lord Rafael Caro Quintero deep in the mountains of his native state of Sinaloa, it was a 6-year-old bloodhound named “Max” who rousted from the undergrowth the man allegedly responsible for the murder of a U.S. DEA agent more than three decades ago.

While the United States’ motivation to find Caro Quintero was never in doubt — hence the $20 million reward for information leading to his capture — there was less certainty about the commitment of Mexican President Andrés Manuel López Obrador, who had made clear his disinterest in pursuing drug lords.

Yet on Friday, three days after López Obrador and U.S. President Joe Biden met in the White House, the most wanted target of the U.S. Drug Enforcement Administration was in Mexican custody.

Mexico’s Attorney General’s Office said in a statement late Friday that Caro Quintero was arrested for extradition to the U.S. and would be held at the maximum security Altiplano prison about 50 miles west of Mexico City.

DEA Administrator Anne Milgram celebrated the capture of a man especially despised by U.S. officials for the torture and murder of DEA agent Enrique “Kiki” Camarena in 1985.

“Today’s arrest is the result of years of your blood, sweat, and tears,” she said in a message to the agency late Friday.

Cooperation between the DEA and Mexico’s marines had led to some of the highest-profile captures during previous administrations, but not under López Obrador, noted security analyst David Saucedo.

“It seems to me that in the private talks between President Joe Biden and Andrés Manuel (López Obrador) they surely agreed to turning over high-profile drug traffickers again, which had been suspended,” Saucedo said.

Both presidents face domestic pressure to do more against drug traffickers. With Caro Quintero’s arrest, “Narcos are being captured again and I believe that clearly it was what was in fact needed,” Saucedo said.

The arrest came at a heave cost, however. Fourteen marines died and another was injured when a navy Blackhawk helicopter crashed during the operation. The navy said in a statement that it appeared to have been an accident, with the cause under investigation.

Samuel González, who founded the organized crime office in Mexico’s Attorney General’s Office and now is a security analyst, said the capture may not have a major effect on the map of organized crime in Mexico, as Caro Quintero was not as powerful as decades ago, and it might even generate more violence in territories such as Sonora, at the US border.

But he said that to López Obrador’s benefit, the arrest “shows evidence that there’s no protection of capos” by his administration.

González believes Caro Quintero has long been a thorn in the bilateral relationship, but said that “without doubt” his capture was fruit of the recent negotiations in Washington.

“The Americans never stopped pressing for his arrest,” González said.

U.S. Attorney General Merrick Garland and U.S. Ambassador to Mexico Ken Salazar expressed gratitude for Mexico’s capture of a man blamed for the 1985 killing of Camarena — a case that brought a low point in U.S.-Mexico relations.

“This achievement is a testament to Mexico’s determination to bring to justice someone who terrorized and destabilized Mexico during his time in the Guadalajara Cartel; and is implicated in the kidnapping, torture and murder of DEA agent Kiki Camarena,” Salazar said in a statement late Friday.

Garland said the U.S. government would seek his immediate extradition.

“My hope is that with the capture of Caro Quintero, that that will mend a lot of tensions between the DEA and Mexico”, said Mike Vigil, the DEA’s former chief of international operations.

Mexico’s navy and Attorney’s General Office led the operation deep in the mountains that straddle the border between Sinaloa and Chihuahua states, many miles from any paved road. They found Caro Quintero, with help of “Max,” hiding in brush in a place in Sinaloa called San Simon.

López Obrador said that the helicopter that crashed in the coastal city of Los Mochis had been providing support in the pursuit of Caro Quintero. U.S. officials expressed condolences for the marines who died.

Caro Quintero came from Badiraguato, Sinaloa, the same township as Joaquin “El Chapo” Guzman, the former leader of the Sinaloa cartel, which formed later. Caro Quintero was one of the founders of the Guadalajara cartel and according to the DEA was one of the primary suppliers of heroin, cocaine and marijuana to the United States in the late 1970s and 1980s.

Caro Quintero had blamed Camarena for a raid on a huge marijuana plantation in 1984. The next year, Camarena was kidnapped in Guadalajara, allegedly on orders from Caro Quintero. His tortured body was found a month later.

Caro Quintero was captured in Costa Rica in 1985 and was serving a 40-year sentence in Mexico when an appeals court overturned his verdict in 2013. The Supreme Court upheld the sentence, but it was too late — Caro Quintero had been spirited off in a waiting vehicle.

Caro Quintero was added to FBI’s 10 most wanted list in 2018 with a $20 million reward for his capture.

López Obrador had previously seemed ambivalent about his case.

Last year, the president said the legal appeal that led to Caro Quintero’s release was “justified” because supposedly no verdict had been handed down against the drug lord after 27 years in jail. López Obrador also depicted a later warrant for his re-arrest as an example of U.S. pressure.

“Once he was out, they had to look for him again, because the United States demanded he shouldn’t have been released, but legally the appeal was justified,” López Obrador said.

Presidential spokesman Jesús Ramírez said at the time, “The president was just saying that it was a legal aberration that the judge had not issued a verdict on Mr. Caro Quintero after 27 years … but he was not defending his release.”

While Caro Quintero was a fugitive, Mexican reporter Anabel Hernandez interviewed him twice in the mountains of northern Mexico without revealing the location. Caro Quintero claimed in those interviews that he was no longer involved in the drug trade.