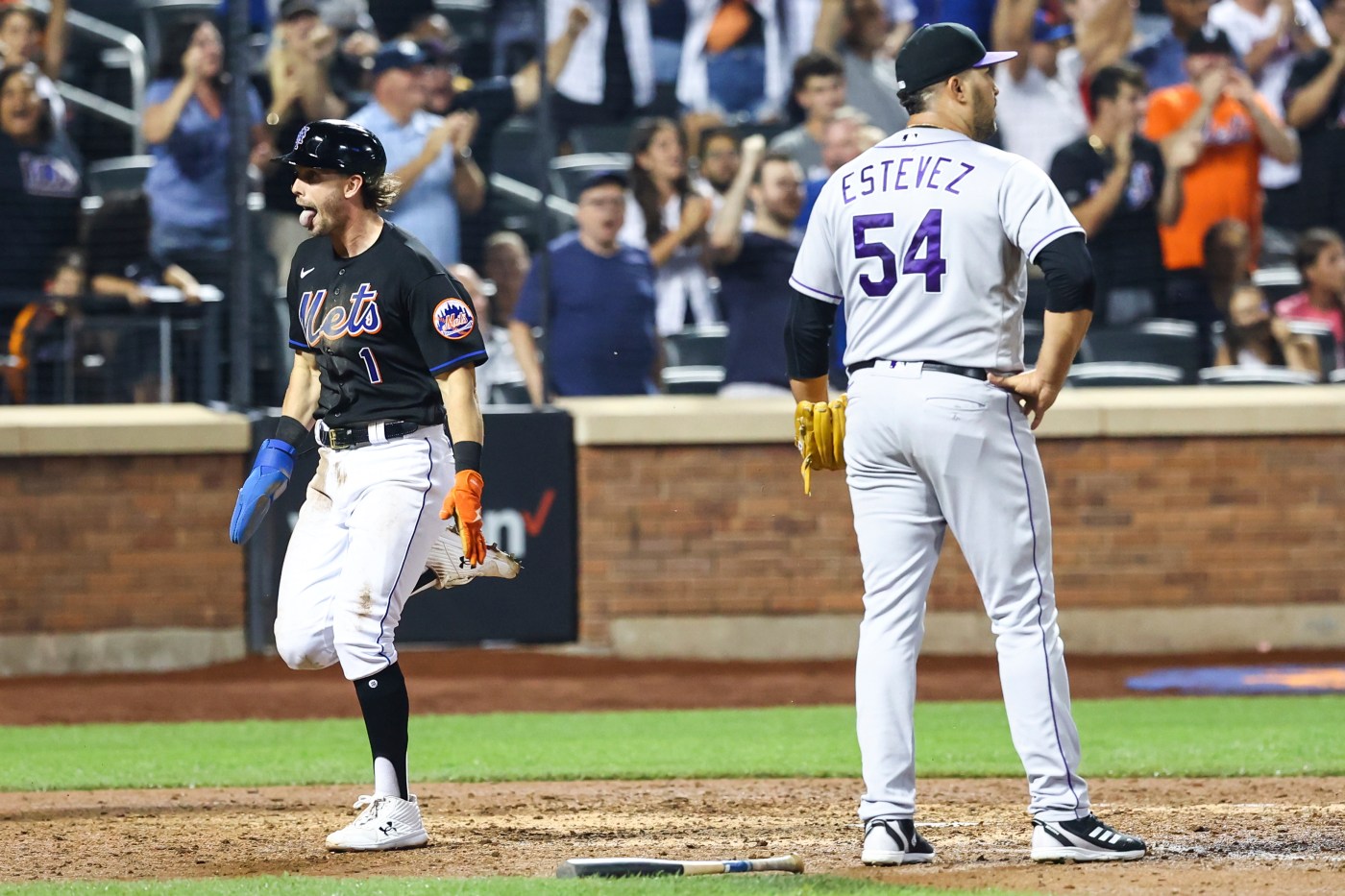 Exhibit A:  The Mets’ 7-6, walk-off victory on Friday night at Citi Field in front of a raucous crowd that saw the Mets improve to 42-19 at home. Pete Alonso snuck a two-out single through the left side off closer Daniel Bard to score Brando Nimmo with the winning.

Bard, one of baseball’s best relievers this season, was his own worst enemy. He gave up a one-out walk to Nimmo and then plunked Starling Marte, moving Nimmo into scoring position.

The Rockies fell to 18-41 on the road in what ranks as one of their most soul-crushing losses of the season.

But the Rockies really lost this game in the eighth when New York knotted the game at six.

Colorado seemed to have notched a rare road win against a quality opponent on a three-run double by catcher Elias Diaz in the top of the eighth.

Diaz hit a 2-2 fastball off reliever Mychal Givens, who had a short stint with the Rockies last season. The Mets faithful in Flushing Meadows let Givens have an earful.

In a topsy-turvy affair, the Mets took a 4-3 lead in the sixth against struggling lefty reliever Lucas Gilbreath. Ruf, inserted as a pinch hitter, drew a one-out walk and McNeil followed with a single up the middle. Canha ripped a double to score Ruf, but center fielder Wynton Bernard made an excellent throw to second baseman Brendan Rodgers, who threw a strike to Diaz, who tagged out McNeil at the plate.

Rockies right-hander Chad Kuhl, making his first start since coming off the injured list, showed glimpses of the pitcher he was earlier in the season when he was the Rockies’ most effective pitcher.

With his slider biting, Kuhl struck out four and allowed just five hits over his five innings. But the Mets roughed him up in two frames. Mets rookie third baseman Brett Baty led off the third with a homer to right-center, the second of his career and his first at Citi Field.

Kuhl was a little bit erratic in a two-run fifth that gave New York a 3-0 lead. Kuhl plunked Canha to lead off the inning, surrendered a one-out single to James McCann and then served up a two-out, two-run triple to Marte.

Kuhl was coming off the worst outing of his Rockies career in the start just prior to being placed on the IL. He allowed a season-high nine runs in just five innings on Aug. 3 at San Diego.

New York’s Chris Bassitt threw five scoreless innings, but the Rockies figured him and tied the game with a three-run sixth. Colorado displayed the kind of team offense that it’s so often lacked on the road.

Bernard led off with a bloop single and McMahon drew a walk, setting up Rodgers’ two-run double off the top of the right-field wall. Rodgers’ blast missed being a home run by just a few inches. C.J. Cron drove in Rodgers with an opposite-field single to right.

Bassitt certainly wasn’t dominant like teammate Jacob deGrom was on Thursday night in the Mets’ 3-1 victory, but he was effective in his own way, inducing a career-high 13 groundball outs over 7 1/3 innings.