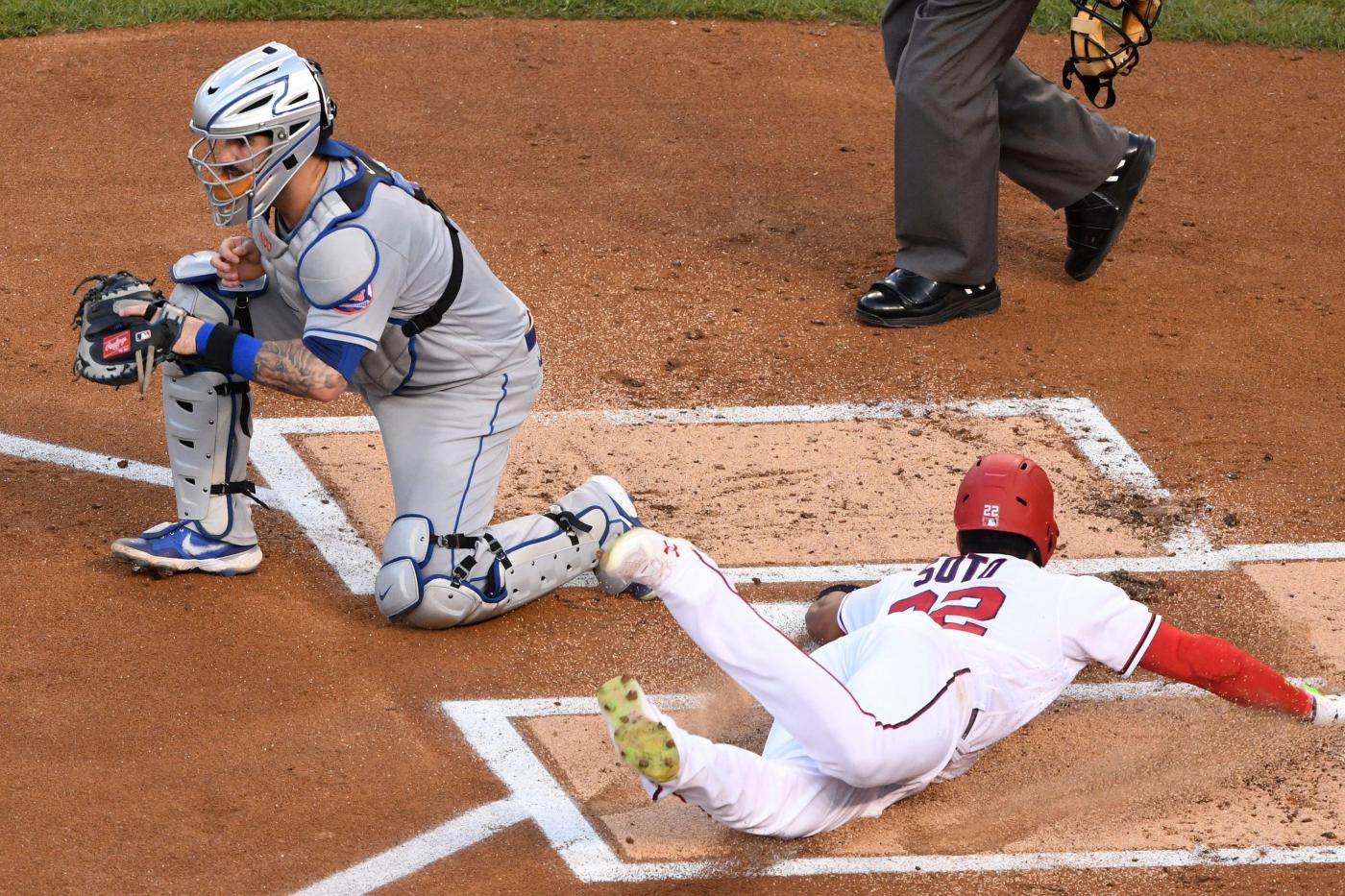 WASHINGTON, D.C. — If this was Juan Soto’s last game as a Washington National, it ended like most of his other 2022 games have: with a loss.

The Mets beat Soto and the Nats 7-3 on Monday night, giving the Mets seven straight wins and the Nationals nothing more than an uncertain future. Twisting the knife even more, it was ex-National Max Scherzer on the hill for the Mets, making his way through most of the non-Soto hitters in Washington’s lineup like a pair of scissors through wrapping paper.

And, just as a reminder, Jacob deGrom is scheduled to follow Scherzer on Tuesday.

Scherzer went 6.2 innings against his old squad, striking out five and allowing three runs, two of which were scored by Soto. For the second day in a row, the Mets won a game in which their starting pitcher didn’t totally look like himself but used a cocktail of moxie and guile to gut out a victory.

On Sunday, Taijuan Walker said plainly that he “didn’t like” his outing in Miami. His team still won 9-3. Monday, the Nationals went up by a run in the first inning, whacked four hits against Scherzer in the fourth, and the Mets ended up winning by four.

It helps to have one of the deepest lineups in all of Major League Baseball.

The Mets pushed at least six runs home for the fifth time in their last seven games. If there’s any constant in today’s ever-changing world, it’s the top of the Mets’ order. Brandon Nimmo, Starling Marte, Francisco Lindor and Pete Alonso have occupied the top four spots in the team’s lineup all season. Nimmo and Marte’s on-base skills have allowed Lindor and Alonso to feast on RBI, and that’s exactly what was on the menu on Monday.

Eight knocks came from that quartet, with five runs driven in and four extra base hits. Lindor and Alonso each sent a ball into the Mets’ bullpen, giving Lindor 18 homers on the season and the Polar Bear 27. When it looked like a brief disturbance would disrupt them — a Steve Cishek pitch hit Marte on the hand in the sixth inning, forcing the trainer to come out — he simply shook it off and went to first base.

In watching the Nationals, it’s both readily apparent why they’ve struggled so much this year, but also immediately noticeable how much Soto means to them. The fans at Nationals Park, sensing that these could be Soto’s final hours with their favorite team, cheered him as soon as he came out for batting practice. They kept the applause going as he stretched in the outfield prior to the game, and seemed to increase the volume when he strode to the plate for each at-bat. With the Nats down by four in the bottom of the eighth, all hope looking lost, an organic “We Want Soto” chant percolated from the stadium’s lower bowl.

None of that even mentions the day he had at the plate.

Soto was 1-for-1 with a solo homer and three walks, about as classic a Soto line as you’ll ever see. On the third and final walk, the 23-year-old got a standing ovation that swelled with each of his slow paces up the line. Should he get traded, let it be known that it was the team’s upper management that didn’t want him, not the people of Washington, D.C.

Less than three years ago, Scherzer, Soto and a bunch of other very talented players who are now on other teams helped Washington win an improbable World Series title. That Game 7 celebration seems much more distant than that now, and if their hero ends up elsewhere after the trade deadline, those who truly care about the Washington Nationals have every reason to be furious with the team’s front office.

Those days of vitriol and spite toward the front office have been in the Mets’ rearview mirror all season, a welcome change of pace for the little brother of Big Apple baseball. A 65-37 record, seven wins in a row, and one of the best rosters in the league will do that.

Plus, just to mention it one more time, Jacob deGrom comes back on Tuesday.