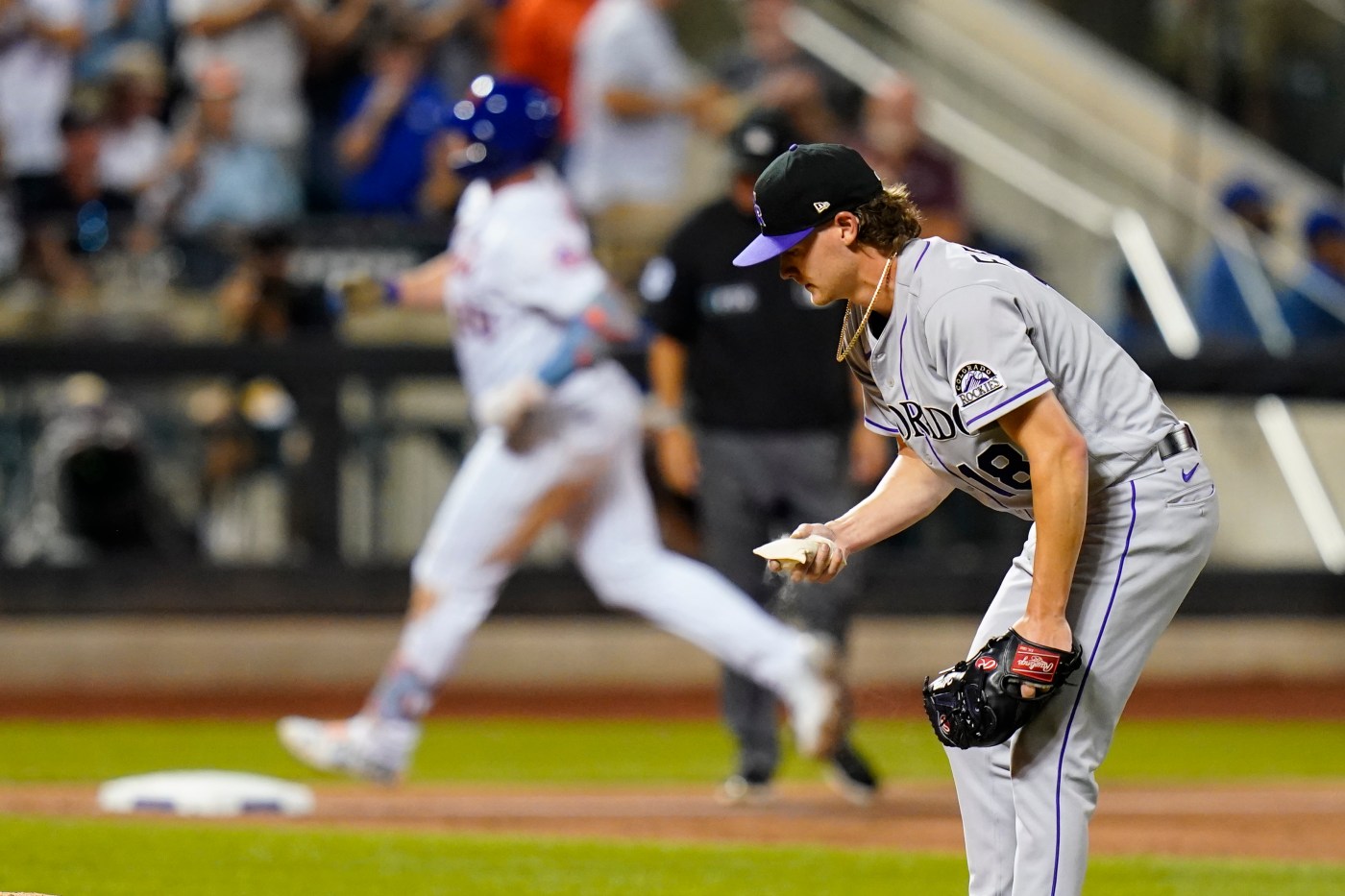 He was superb again Thursday night in the Mets’ 3-1 victory over Colorado, giving up just three hits and striking out nine over six innings. He also walked a batter, just his second free pass of the season.

Still, deGrom wasn’t quite perfect and that left the door slightly open for Colorado to have a chance to win. But, as so often happens on the road, the Rockies couldn’t convert in the clutch and fell to 18-40 away from Coors Field. The Rockies were 1-for-6 with runners in scoring position and struck out 14 times.

Ryan McMahon, who’s having a solid August, plastered a 1-0, 97.7 mph fastball off deGrom with one out in the sixth. The home run came off McMahon’s bat at 108 mph and traveled 436 feet, the longest homer off deGrom in more than two years. It was also the first career home run for McMahon hitting from the leadoff spot.

McMahon, however, failed to deliver in the seventh inning with the bases loaded. Right-hander Seth Lugo struck him out with a 3-2 fastball. In the eighth, C.J. Cron drew a two-out walk off of Edwin Diaz and Jose Iglesias followed with a single, but Diaz struck out Randal Grichuk.

“deGrom obviously is who he is,” McMahon told  AT&T SportsNet. “Everybody knows how good he is and he came at us tonight. We knew we would have to fight for everything we could get.

“We had some chances, we put some runners in scoring position, especially late, but we just couldn’t get the big knock.”

Former Rockie Adam Ottavino closed out the game for the Mets with a spotless ninth inning to get his first save of the season.

deGrom was perfect for 4 1/3 innings before Jose Iglesias singled off the glove of shortstop Francisco Lindor and Grichuk followed up with a double down the left-field line. But deGrom struck out Sam Hilliard and got Brian Serven to fly out to right to quash the mini-rally.

Rockies starter Ryan Feltner pitched well enough to give his team a chance — against just about anybody but deGrom — giving up three runs on six hits in 4 2/3 innings.

The Mets punched out their three runs in the third inning, the big blow a 409-foot, two-run homer by Pete Alonso, the 2021 Home Run Derby champion at Coors Field. Alonso has 31 homers and 104 RBIs with 36 games remaining.

“That (home run) was the back-breaker, for sure,” Black said. “Both bullpens did a good job. They picked up deGrom, we picked up Feltner.”

“I loved what he did out there,” McMahon said. “Just one mistake to a big-time power hitter. That was a learning moment for (Feltner) but I thought he was pitching great. They definitely didn’t look comfortable out there against him, especially early.”

Roster move. Right-hander Chad Kuhl was reinstated from the 15-day injured list Thursday and right-handed reliever Robert Stephenson was designated for assignment. Kuhl will start Friday against the Mets.

Stephenson, a first-round pick by the Reds in the 2011 MLB Draft, was acquired by the Rockies via trade following the 2020 season. He posted a career-best 3.13 ERA across 46 innings last season but has struggled this season, posting a 6.04 ERA in 45 appearances. The 29-year-old gave up three runs over two innings in the Rockies’ 16-4 loss to Texas on Wednesday.

Bryant watch. Left fielder Kris Bryant, who’s played in just 42 games this season, is no closer to returning to the playing field. Bryant has undergone a PRP (platelet-rich plasma) injection and will be re-evaluated in seven to 10 days, manager Bud Black said Wednesday.

Kuhl, a pending free agent, is pitching for his future, be it with the Rockies or with another club. The right-hander is making his first start since being placed on the 15-day injured list Aug. 5 with a right hip flexor strain. Before he landed on the IL, he was scuffling, allowing a season-high nine runs at San Diego on Aug. 3. He’s taken his lumps on the road, going 3-4 with a 6.08 ERA. He’s faced the Mets three times in his career, all when he was pitching for Pittsburgh, going 1-1 with a 4.73 ERA. He last faced the Mets on July 16, 2021, posting a win after allowing no earned runs on two hits over five innings.

Bassitt has won four consecutive starts for the first time in his career, allowing two or fewer runs in all four games, while posting an 0.69 ERA. In his six starts since the All-Star break, the Mets are 5-1 and he’s posted a nifty 1.85 ERA. He’s only faced the Rockies once, way back on June 30, 2015, when he pitched for the A’s. He allowed just one run over five innings at Oakland, but the Rockies took a 2-1 victory.

At issue: The Rockies entered Thursday night’s game against the Mets with a .296 winning percentage (8-19) against the National League East, which is the lowest of any season in franchise history. After four games against the NL East-leading Mets, the Rockies have to play three at Atlanta, the defending World Series champions and a likely playoff team.