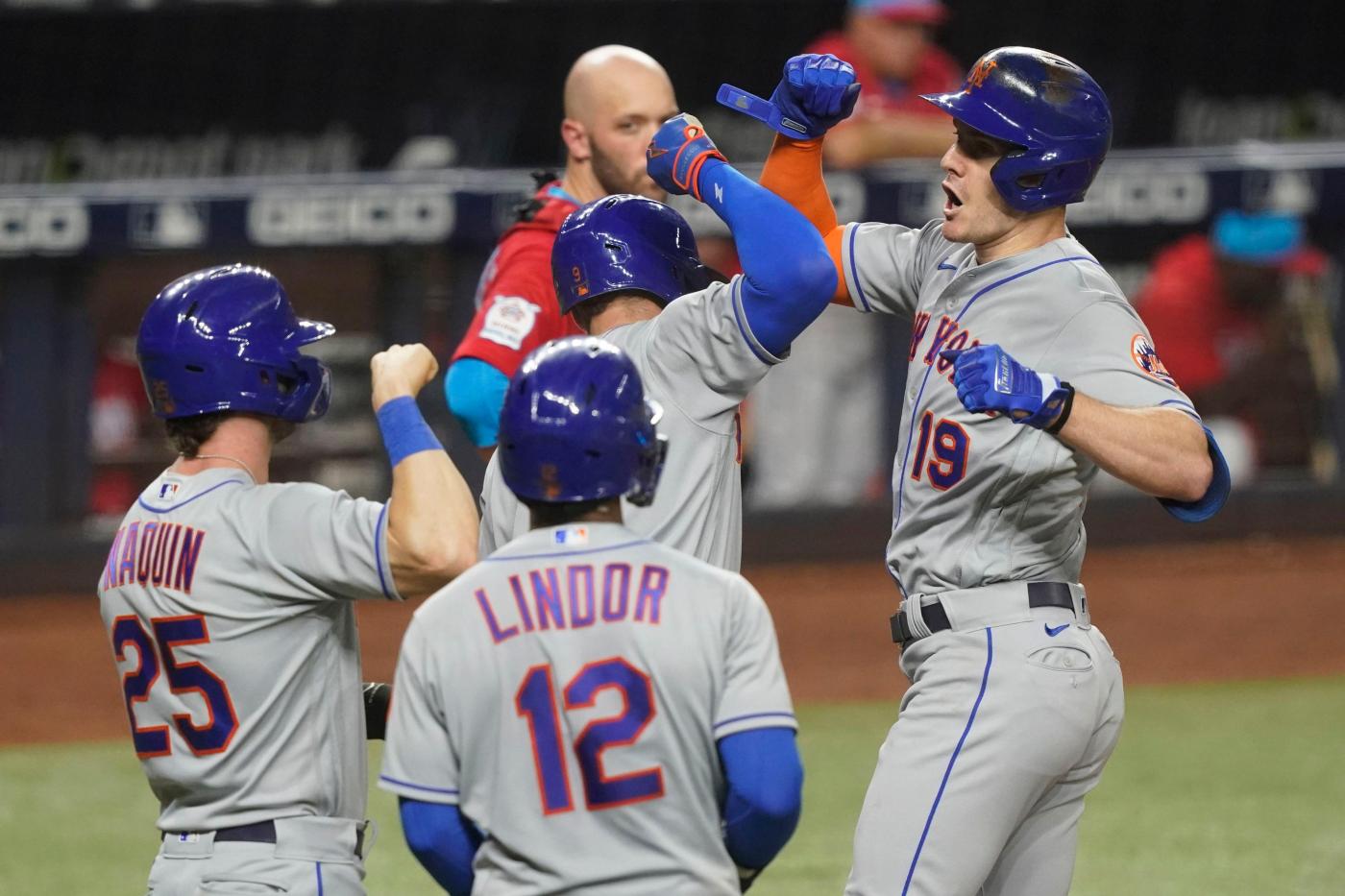 The Mets began Saturday night game without the National League East lead for the first time since April.

Naturally, that invited some alarmist fans to worry more than they should have, sinking into the cold comfort of the Mets being a disappointment like they’d been so many times in previous years.

There’s a reason why the past is the past though. These 2022 Mets turned in the exact game that they and their fanbase needed, drubbing the Marlins 11-3 in Miami. Five players recorded multiple hits, Carlos Carrasco gave them six stress-free innings, and after an eight-run inning in the fourth all but ended things, they kept their foot on the gas and scored even more after that.

The offense had been the concern for the Mets during most of the last 40 days or so, the period in which Atlanta sprinted from behind and caught them in the standings. While many would point out that the offensive explosion on Saturday came against the underperforming Marlins, it also came against Pablo Lopez, the fine Miami pitcher that’s sported a 3.45 ERA over the last three seasons.

Within the somewhat struggling lineup, even the most downtrodden Mets found some hits on Saturday night. Eduardo Escobar keeps surging in the right direction. The switch hitter collected three hits, two of which went for extra bases. He ran his hitting streak to eight games and scorched his 16th homer of the season, which cleared the deepest part of the outfield wall in center field. The Mets would have liked Escobar (.690 OPS entering the game) to do this all season, but it’s nice to get this type of production from him now as every at-bat matters just a little bit more.

James McCann (.552 OPS at the start of Saturday, though some of that is due to injuries) also had one of his better days of the season. McCann has seen a large percentage of his playing time go to Tomas Nido, as the aforementioned injuries and a putrid season at the plate have swallowed him up. But a 2-for-5 night with a very impressive opposite-field double showed that McCann can still occasionally be the guy the Mets paid so handsomely in free agency.

Like Escobar, Francisco Lindor fell just a triple shy of hitting for the cycle. His home run in the fifth inning landed in the second deck of the left field seats to supply the Mets’ tenth run of the evening, a perfect physical representation of just how thoroughly they dominated the Marlins in this game. Mark Canha’s homer an inning earlier didn’t travel as far, but it was worth four times as many runs. The grand slam was the first of Canha’s career, coming on his 93rd homer in his eighth MLB season and putting a snowman in the run column for the visitor’s half of the fourth inning.

Nearly everything that happened for the Mets was a jumbo dose of much-needed fun. A laugher on the scoreboard and in the dugout was a necessity at this point in the season, both to hold off the Braves and the worrisome fans, but also to remind the guys in blue and orange that they are still capable of pulverizing their opponent.

Once the outcome of the game was obvious, Bryce Montes de Oca emerged from the bullpen. It’s hard to draw up a more fun reliever to inject into this team. Montes de Oca’s shoulders make it look as though the hanger is still in his jersey, and he was responsible for each of the 11 hardest-thrown pitches of the game. He had a sinker buzz into McCann’s glove at 102.4 mph and a cutter that ran in at 97.7. It’d be foolish to expect anything more out of Montes de Oca right now than September support, but his cameo has certainly proven that he can be an electric part of the Mets’ future bullpen if he can harness his Formula 1-style pitches.

Speed-first, hitting-never Terrance Gore also dove into the pool, getting some late-game action in left field and striking out on three pitches in the ninth inning. A chance to take the series from the Marlins awaits the Mets on Sunday, and if they score even half as many runs as they did on Saturday, they stand a very good chance of accomplishing that goal.