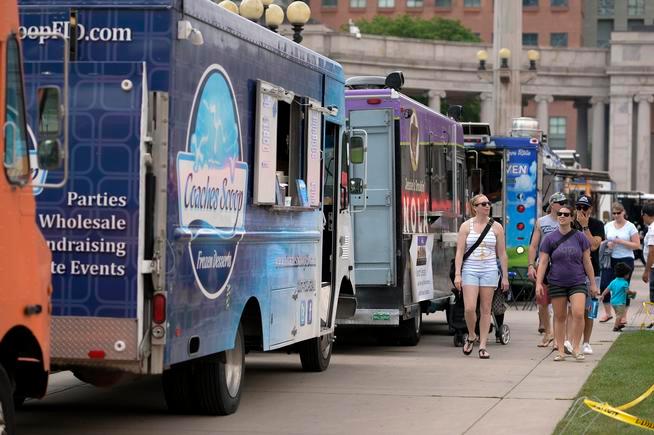 The firm’s lawyers say the ban is not only a bad policy but may also be unconstitutional.

The Institue for Justice, a Virginia-based, nonprofit law firm, sent a letter to Denver City Council members on Wednesday urging the “repeal” of the ban that bars food trucks from portions of Market, Blake and Larimer streets between 18th and 22nd streets on Thursday, Friday and Saturday nights.

“IJ has sued numerous jurisdictions whose laws have impermissibly restricted vendors’ right to economic liberty as
guaranteed by the U.S. Constitution and the respective state constitutions,” reads the letter, authored by attorney Justin Pearson. “IJ also has a long history of working with state and local officials to craft vending laws that ensure the public’s health and safety while maximizing opportunities for vendors and consumers alike.”

The prohibition on trucks selling tacos, gyros and other food in one of the city’s busiest nightlife epicenters began in late July. Announced by the Denver Police Department and the city’s Department of Transportation and Infrastructure, the rationale behind the ban is that food trucks slow down crowds from dispersing when bars close and people bunching up around them heightens the possibility of violence in an area that has seen at least four shootings this year.

The policy was announced two weeks after Denver police shot a man outside the Larimer Beer Hall, 2012 Larimer St., after he got in an altercation with another patron in front of the bar. The man, who survived and was arrested, was carrying a gun when officers confronted him. Police also wounded six bystanders in the incident.

Denver officials say the food truck policy was under consideration before that shooting took place. In a statement earlier this month, Denver police spokesman Jay Casillas said the department felt the ban would make everyone in LoDo safer including the food truck operators.

The Institute for Justice has filed and won lawsuits around food truck and street vendor regulations before. Those cases have been primarily focused on fighting rules dictating where mobile food sellers could operate relative to existing brick-and-mortar restaurants.

“None of the bystanders in LoDo were hit by a flying spatula. That’s not what happened,” Pearson said Thursday. “It makes no sense to punish food truck owners because the city government is ashamed of its own mistakes. If you’re worried about crime, the last thing you want to do is get rid of food trucks.”

While the policy was the work of the police and the city’s transportation department, Pearson said his firm sent the letter to the council because council members have the power to overturn it.

The letter lays out arguments as to why the policy may be viewed as unconstitutional including potential violations of equal protection guarantees.

The letter is not an ultimatum, Pearson said. The firm is waiting to see how the city reacts. But “if we were to file a case against Denver, I would like our chances,” he said.

DPD and the transportation department did not run the ban by the city council before implementing it, City Council President Jamie Torres said.

While the council has heard from food truck owners who make compelling arguments that their businesses bring positive activity to LoDo, Torres also feels that there is a case to be made for spreading out crowds once bars close. In the end, Torres does not feel reversing the ban is the council’s call to make.

“My estimation is that lies with the chief (of police) and the mayor,” she said. “I imagine it is something that the city attorney’s office should be looking at.”

The police department is already looking to roll back the ban in a limited fashion.

Leilani Johnson, who owns RJ’s TacoWich, told Westword that she and other food truck operators met with DPD officials on Wednesday and learned the department may allow six food trucks back into the ban zone for the weekend starting Thursday, Aug. 25. The trucks would be required to leave the neighborhood by midnight.

“It still doesn’t feel like a solution,” Johnson said in the Westword story. “It’s better than being banned, though.”