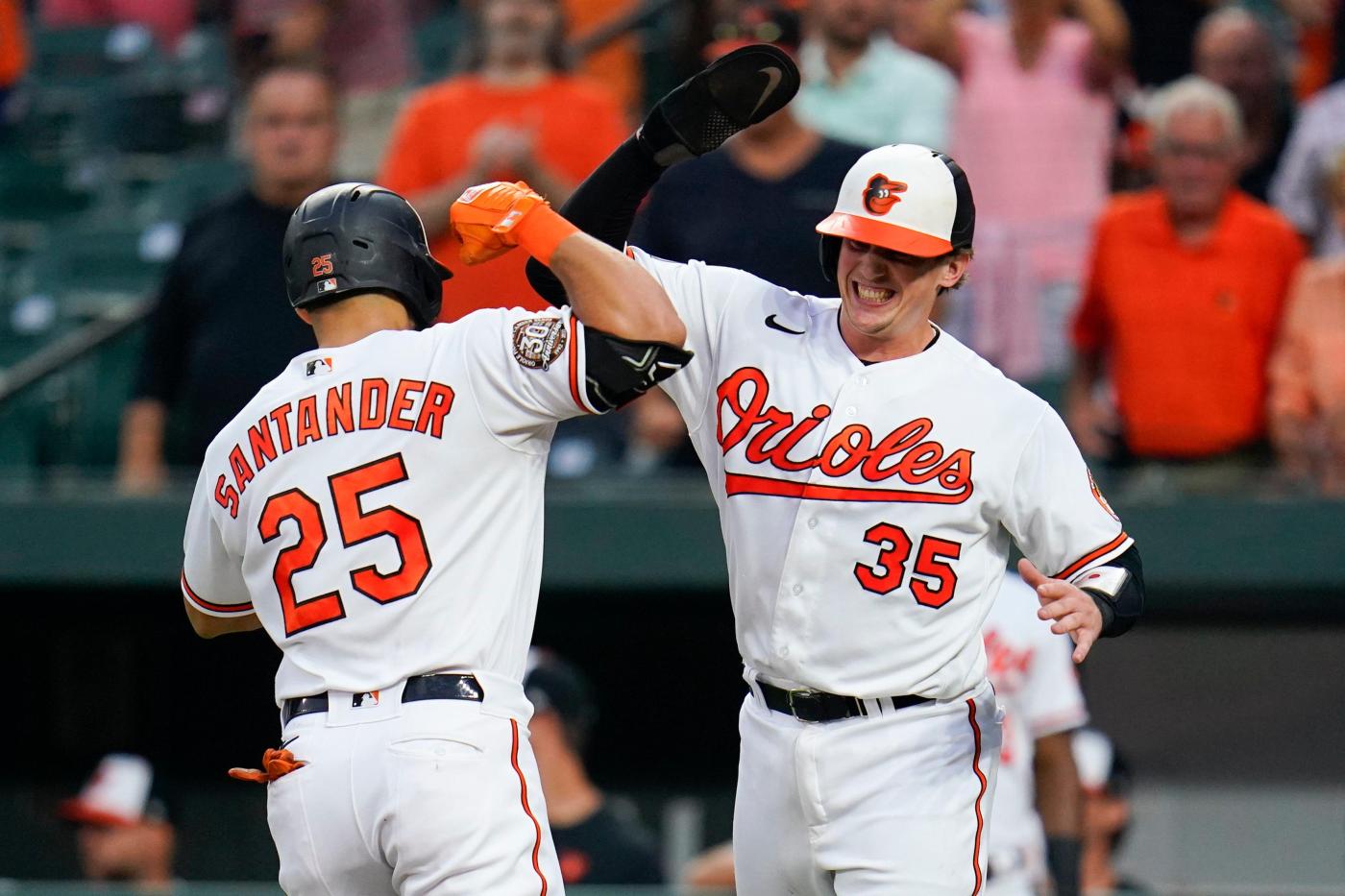 Kyle Stowers let out a roar and pumped his fist as he reached second base. While rounding third to face the Orioles’ dugout, he yelled, “Come on!” and flexed, doing so again as he stepped on home plate.

His excitement after his first career home run matched those who remained of the announced 13,905 at Camden Yards on Thursday night. The solo shot, coming in an 0-2 count with two outs against Chicago White Sox All-Star closer Liam Hendricks, tied the game in the bottom of the ninth.

Chicago had retired 12 straight Orioles when Stowers came up, the rookie himself hitless in his past 13 at-bats. He lofted Hendricks’ first pitch down the left field line and into foul territory, but Adam Engel, brought into the game as a defensive replacement an inning earlier, was unable to complete the catch after a long run, keeping Stowers’ at-bat alive. He swung threw an elevated fastball to leave Hendricks one strike away from striking out the side and completing the save. But Stowers powered the next, a curveball that hung in the middle, out to center field for a home run.

Two innings later, Anthony Santander laced a line drive to center field to score automatic runner Cedric Mullins from third as the Orioles won the three-game series with a 4-3 victory.

The victory ensured the Orioles (65-59) their third straight winning month, having gone nearly five years without one before this stretch. They remain 2 1/2 games behind the Seattle Mariners for the final American League wild-card spot.

Between Santander’s two-run home run in the first inning and Stowers’ game-tying solo shot, the Orioles managed only four base runners. Despite that, they took a 2-1 lead into the seventh, only for the White Sox (63-62) to strike for an unearned run in that frame and the go-ahead run in the eighth.

After giving up a home run on his first pitch, Orioles starting pitcher Jordan Lyles settled in to give the Orioles seven innings, only their third start of that length since the start of July. He’s responsible for two of them.

“I think he’s exceeded our expectations and what he’s done for us in every way,” manager Brandon Hyde said before the game. “I think putting up the numbers that he’s put up in this division, to be able to really be the rock in our rotation and somebody for our really inexperienced rotation guys to look up to, I think he’s been everything and more of what we asked. He was a great sign because he really has been a huge help this year and a big part of what we’re doing.”

Lyles didn’t record a clean inning until the fifth, with a slick sliding play for shortstop Jorge Mateo closing another in the sixth.

But a bloop hit to center and an infield single off first baseman Ryan Mountcastle’s glove put Lyles in trouble. He got a ground ball for a potential double play, but second baseman Terrin Vavra’s forced throw to first got by Mountcastle, who then bobbled an attempt to pick up the ball. The sequence allowed Romy Gonzalez to score the tying run from second.

Lyles gave Vavra a second chance with another double-play grounder, and although he one-hopped another throw, Mountcastle picked that one, giving Lyles his fifth seven-inning start. All other Orioles pitchers have three combined.

>> To get a fresh arm in the bullpen, the Orioles optioned Louis Head to Triple-A Norfolk and recalled Rico Garcia in an exchange of right-handers. Phoenix Sanders, claimed on waivers Wednesday from the Tampa Bay Rays, was also optioned.

>> Tyler Wells threw his second bullpen as he works his way back from the left oblique strain that has him on the injured list, with the next step being a live batting practice session. The Orioles are still determining what role the right-hander will be in when he returns, Hyde said. Wells had a 3.90 ERA in 20 starts before the injury but pitched exclusively in relief last year, briefly serving as Baltimore’s closer. It would take longer for Wells to build back up as a starter, while the Orioles were already cautious with his innings after he missed 2019 and 2020 and spent last year in the bullpen.

>> Hyde said he appreciates that each team gets an extra two major league roster spots beginning Sept. 1, but he would prefer more to be able to carry extra pitchers through the season’s final month.

>> Top prospect Gunnar Henderson played third base for Triple-A Norfolk on Thursday, his first game on the left side of the infield in more than week. He had made four straight starts at second base after two games at first base, with those six contests representing his first starts anywhere other than shortstop or third base as a pro.