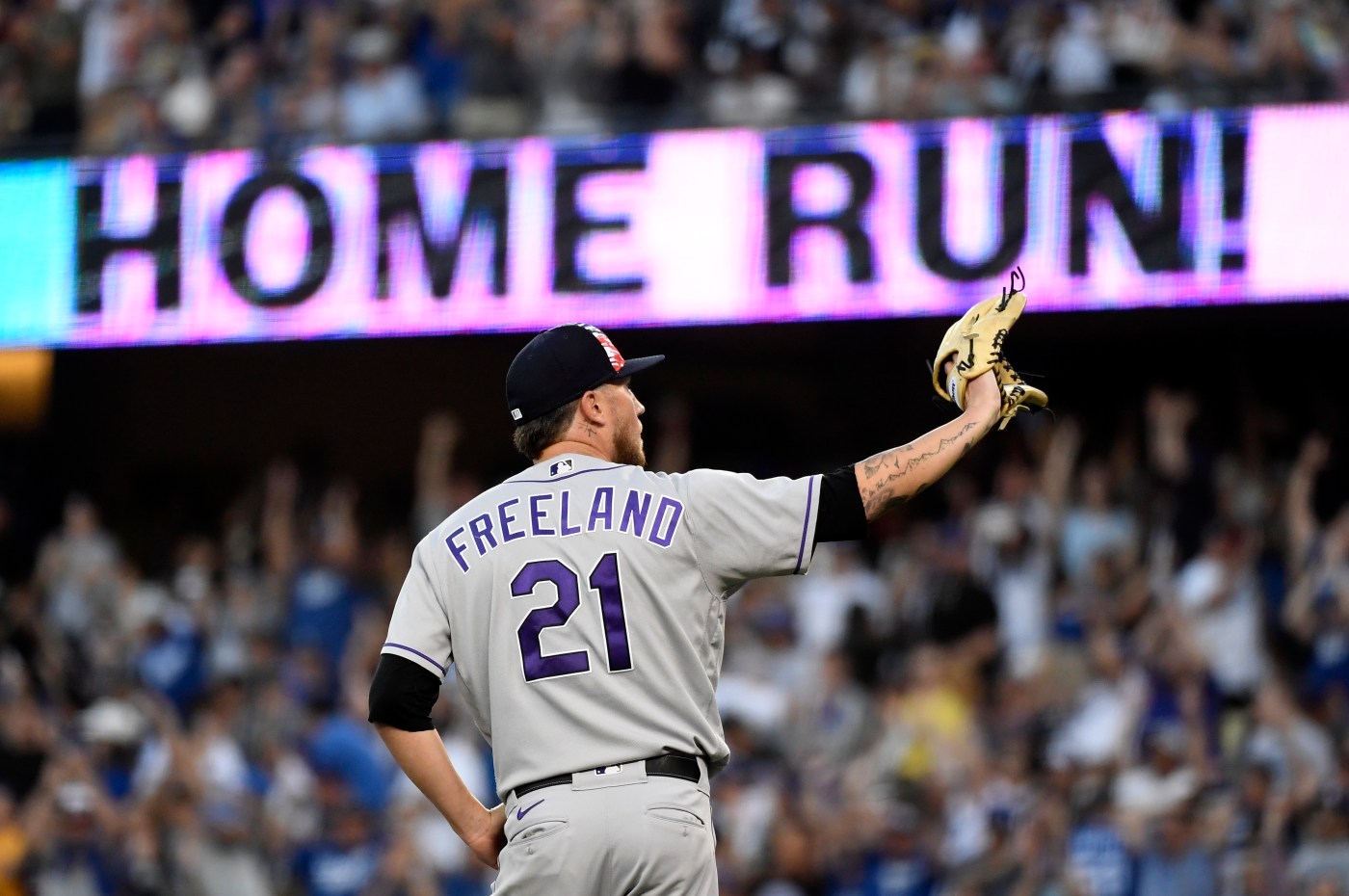 LOS ANGELES — From perfection to dejection. That pretty much sums up Kyle Freeland’s Monday night at Dodger Stadium.

The Rockies’ left-hander threw 4 1/3 perfect innings, with four strikeouts. He was pitching like a Yankee Doodle Dandy on the Fourth of July.

But the Dodgers lit him up for four runs in the fifth inning and held on for a 5-3 victory.

Things went sideways in a hurry for Freeland. Justin Turner drilled a one-out single to right and Freeland walked Chris Taylor. Then came the game-defining moment.

On a full count, Trayce Thompson blasted a three-run homer to left off Freeland’s slider. The previously tepid Dodgers crowd got rowdy as Colorado pitching coach Darryl Scott visited Freeland on the mound. The fans got event rowdier when Cody Bellinger hit a ground-rule double and Mookie Betts singled him home to make it 4-1.

Freeland, clearly upset, could be seen throwing things in the Rockies’ dugout.  His final line: 5 2/3 innings, six hits, four runs, one walk and five strikeouts. His ERA rose from 4.31 to 4.43.

The Rockies entered the game having hit a paltry 18 home runs on the road, the fewest in the majors. Worse, they had just eight homers in their past 26 road games.

They hit two Monday night, including a solo, opposite-field shot to right by C.J. Cron in the ninth off of right-hander Reyes Moronta. It was Cron’s 20th home run of the season, and his third in two games.

The homer set up some late-game drama. Jose Iglesias singled and Elias Diaz walked. With two outs, Charlie Blackmon came up as a pinch hitter to face former Rockies right-hander Yency Almonte. Blackmon singled through the left side to score Iglesias, cutting L.A.’s lead to 5-3.

But Almonte struck out Connor Joe to end the game.

Earlier, Iglesias put a dent in the Rockies’ troubling road trend, leading off the fifth with a solo homer to left off Los Angeles lefty Julio Urias to give Colorado a brief 1-0 lead. It was a little bit of déjà vu for Iglesias, who hit his first home run of the season last Monday against Dodgers lefty Tyler Anderson at Coors Field. Iglesias snapped a career-long streak of 262 homerless at-bats dating back to Sept. 13, 2021.

But Iglesias’ homer was the high-water mark for the Rockies against Urias. They went 0-for-4 with runners in scoring position against him. The Dodgers’ lefty improved to 7-6 and trimmed his ERA to 2.57 with his six-inning, one-run, five-hit, seven-strikeout performance.

The Dodgers tacked on another run in the seventh against right-hander Jhoulys Chacin. Cody Bellinger drew a leadoff walk to set the table for Trea Turner’s RBI double.