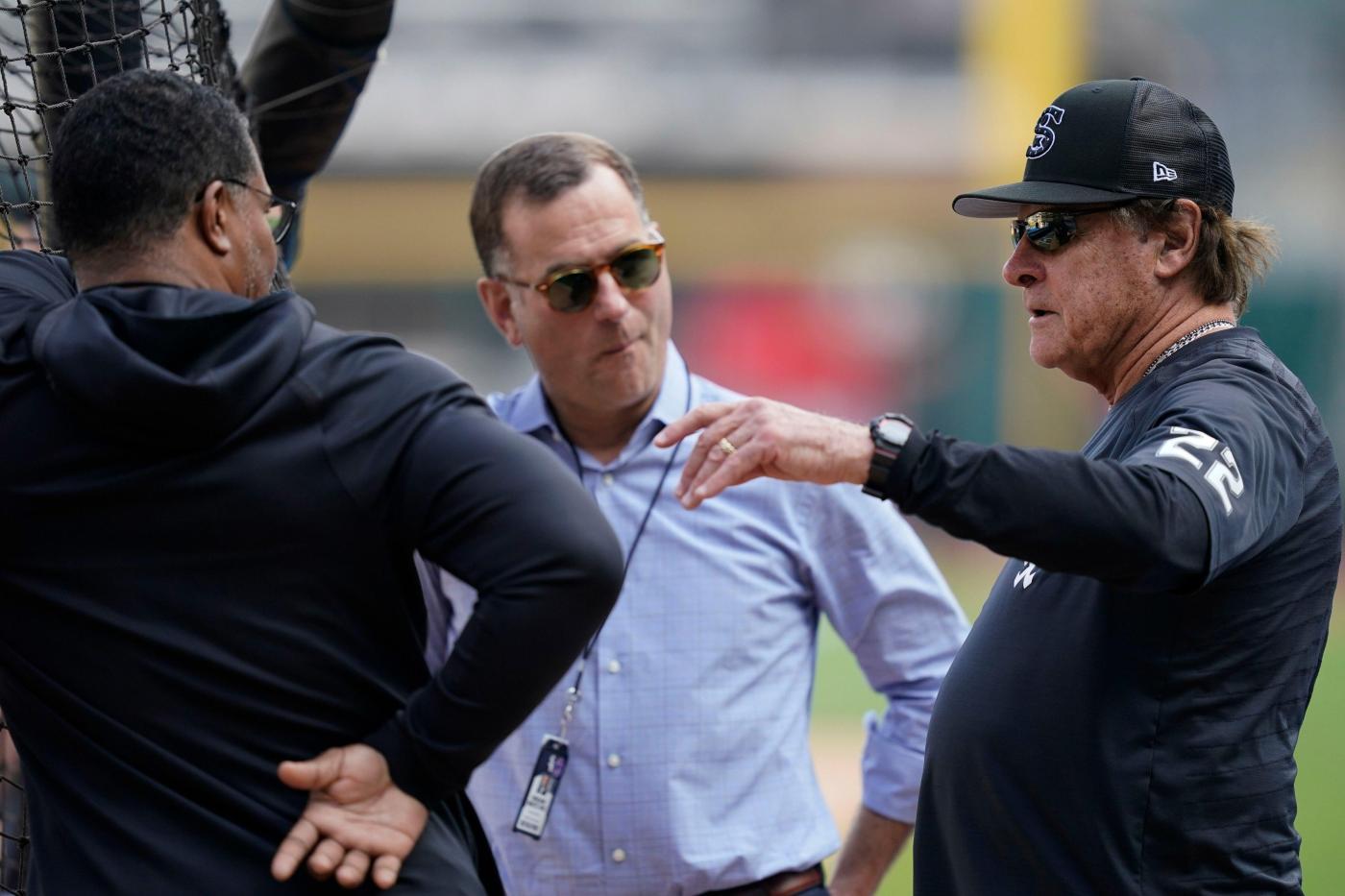 The man who fired Tony La Russa was in the Chicago White Sox clubhouse Sunday morning, two days after the man who could fire La Russa also made a cameo appearance.

But any resemblance between the clubhouse visits of Ken “Hawk” Harrelson and Ken Williams was purely coincidental.

Harrelson, who memorably fired La Russa in the summer of 1986 during Hawk’s one-year reign as general manager, was in town in his role as team ambassador. He stopped by the clubhouse to chat with old friends, including La Russa.

Williams, the former Sox GM who was promoted to executive vice president in 2012, made a trip to the clubhouse Friday to address the team about its underachieving season. USA Today’s Bob Nightengale, who reported the news, tweeted that “no one was absolved, from staff to players, for the team’s woes.”

But whether Williams actually blamed La Russa or his staff for the Sox’s aggravating, mind-numbing and generally uninspiring play is questionable to say the least. La Russa said Williams was there as the team was “celebrating” Tim Anderson’s All-Star recognition.

“There wasn’t anything he said I disagreed with,” La Russa told reporters Tuesday in Cleveland.

What was Williams’ message?

“We’ve had our ups and downs and the talent’s there to make it more ups than downs the second half of the season,” La Russa said.

Didn’t sound like anyone was being blamed. If Williams actually thought the manager and coaches weren’t pulling their load, he should’ve let the camera crew filming Anderson’s celebration for Twitter continue to roll. It would’ve gone viral and the message would’ve been sent.

But of course Williams was not going to publicly criticize Sox Chairman Jerry Reinsdorf’s handpicked manager or La Russa’s handpicked coaches. The fact the news leaked at all was embarrassing to everyone but Williams, who apparently believed he was the right person to give the speech.

Williams went back into his cocoon after Nightengale’s tweet, sending a message through a team spokesman that whatever he said in the clubhouse was a “private discussion.”

The Sox went on to lose to the Cleveland Guardians in Monday night’s opener of a critical eight-game road trip and again in Game 1 of Tuesday’s split doubleheader.

If Sox players truly needed a talking-to, it should’ve been La Russa’s job to say something. He supposedly was brought out of semi-retirement because of his leadership skills, so why would he need Williams to pinch-hit for him?

And if both the players and staff needed to be called out for the team’s sloppy play, it should’ve been GM Rick Hahn’s job.

Once again, it’s another example of Williams trying to prove he’s still in charge, as he did seven years ago in Detroit when he said of Hahn and then-manager Robin Ventura: “I take full responsibility for the underperformance right now. Believe me when I tell you this: The first phone call when the chairman is upset, it isn’t to any of those guys. It’s to me.”

That was Williams’ “Al Haig moment,” when he let Sox fans know he was still The Man. Ventura was Williams’ hire, and Williams was going nowhere.

Hahn eventually let Ventura go after his contract ended in 2016 and without a job search hired bench coach Rick Renteria as the manager of the Sox rebuild. But when Hahn fired Renteria after the shortened 2020 season ended with a playoff loss to the Oakland Athletics, he was informed La Russa would be the right choice as Renteria’s replacement.

Theoretically, Hahn should have the authority to fire La Russa, like any GM in professional sports. But it’s the worst-kept secret in Chicago that La Russa could leave only by his own volition because of his bromance with Reinsdorf. The longer the Sox struggle, the worse it looks for Hahn, whose hands are seemingly tied.

La Russa hasn’t faced this kind of heat in years, mostly because he was working in various front offices since leaving St. Louis, where he was revered for his two championship seasons with the Cardinals. He also knows most managers in his position come under fire for the disappointing play of their teams.

The buck stops there. It comes with the territory.

Former Cubs manager Dusty Baker, now with the Houston Astros, spent his final two years in Chicago fending off rumors about being fired. In 2006 Baker coined the term “black blame box,” referring to the device on an airplane that reveals whether a crash was due to pilot error or mechanical problems.

“The one thing you learn about in life, no matter what job you’re in, is you’re going to have your turn to be in that box, whether you’re a manager or a coach or a CEO or a president or a janitor,” Baker said. “You know everybody is going to get a chance in what I call the black blame box, because that’s what it is.”

La Russa is now in the box, like it or not. But Sox fans don’t chant “Fire Tony” at Guaranteed Rate Field because they actually think it will happen. They do it to show their outrage with the play of this team and for some of his head-scratching decisions. If they also could boo Hahn, you know they would.

Before Monday’s game in Cleveland, La Russa was asked to address another Nightengale report that “there have been a lot of whispers of unrest, cliques and the lack of player leadership inside the clubhouse tearing apart this talented team.”

La Russa refuted the report, saying the Sox are a “very tight club.”

Without knowing who is doing all the whispering, it’s hard to take that report too seriously. The Sox are like any other underachieving team in the post-Zoom era. Most of the stars avoid being around media members before games. Some players talk by appointment only. The exception is outspoken closer Liam Hendriks, which is why Hendriks so often is the team’s unofficial spokesman on various topics.

Regardless, a lack of leadership from Sox players isn’t their biggest problem. The decision to fill holes in the offseason with affordable journeymen instead of bidding on the best free-agent infielders and outfielders tops the list. When injuries hit, the Sox had little depth.

That’s on Hahn, or maybe Williams if he’s still The Man, as the clubhouse address suggests.

There’s still a chance for the Sox to dig themselves out of this hole. But if not, Hahn has to start thinking seriously about unloading players.

The black blame box applies to them as well.