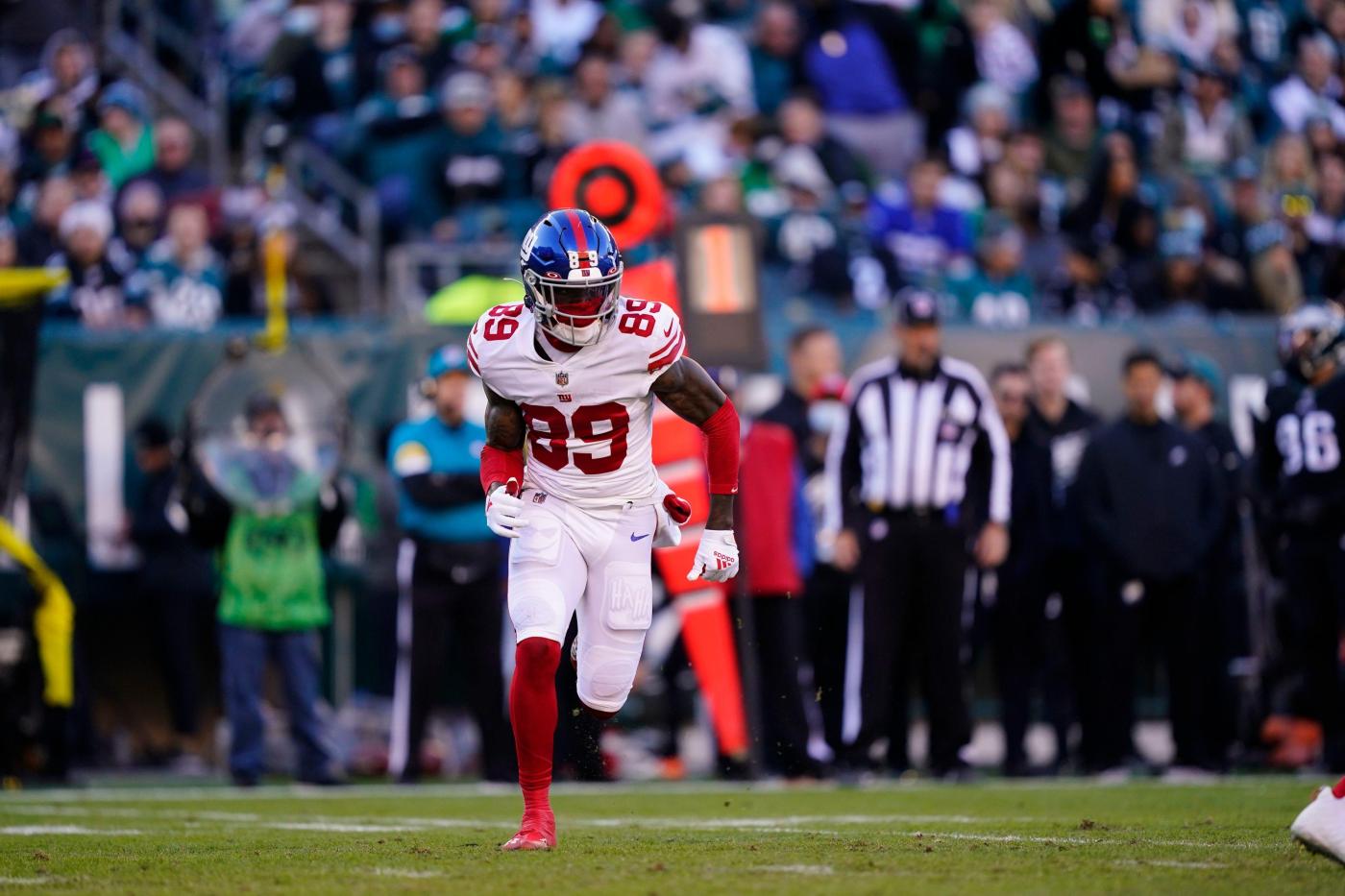 Kadarius Toney could go from seven snaps to zero.

The Giants’ wide receiver was limited in Thursday’s practice by a hamstring injury after practicing full on Wednesday.

He played only seven snaps in a Week 1 win over the Tennessee Titans and now his status for Sunday’s home opener against the Carolina Panthers is unclear.

Toney missed all three preseason games and lots of summer practices with a hamstring injury. He had an offseason knee procedure that sidelined him in the spring.

During a two-receiver concept in Thursday’s individual drills, Toney lined up on the third and final wide receiver pairing alongside practice squad player Marcus Johnson.

Toney has had trouble staying on the practice and playing fields since the Giants drafted him 20th overall last year.

When asked Wednesday if he needs to stay healthy and practice more to earn playing time, Toney said: “If that’s what’s required of me, it’s what I gotta do. Everybody knows I had the injury a couple weeks ago [was] why I wasn’t on the field. So I guess it was just with that. So I dunno. I don’t know what to say.”

The Giants’ new regime made calls to trade Toney in the spring, retained him when a market didn’t develop and then made efforts to demonstrate they were embracing him.

But head coach Brian Daboll only played Toney seven offensive snaps in the opener. Then Daboll said the team’s inactive list of receivers could change week to week.

Toney looked upset at one point on the Giants’ sideline in Nashville, but he assured on Wednesday that he would never be disappointed if the team wins.

Slayton was a healthy scratch in Week 1 after taking a paycut to remain with the team. He could be making his season debut against the Panthers.

THIBODEAUX ‘CONFIDENT’ HE CAN PLAY

But Thibodeaux was limited for a second straight day in practice, so it will depend on how he feels Friday and Saturday.

“We’ve been making great gains,” Thibodeaux said. “I’m optimistic about it … [My knee] feels a lot better. Just trying to tolerate the pain and make sure I don’t do too much and re-aggravate it. Make sure I do everything in my capacity and continue to push that envelope.”

This will be wait and see. Thibodeaux assured “we just want to cross our T’s and dot our I’s before I get out there.”

Asked if it was hard watching from the sidelines last weekend, Thibodeaux said: “I wasn’t really too worried. They say the second rat always gets the cheese. So as long as I continue to do everything I need to do, I’ll be good in the long run.”

Veteran practice squad corner Fabian Moreau projects as Sunday’s starting outside corner in place of Aaron Robinson, who had his appendix removed this week. Moreau played the Panthers twice last year as a member of the Atlanta Falcons. “Good man to man corner, has played some games, has been in that division, has picked up our system well, had a good practice [Wednesday],” Daboll said … The Giants experienced some confusion on offense with the play calls in a scoreless Week 1 first half amid frequent substitutions and a loud environment. Offensive coordinator Mike Kafka said ironing out those wrinkles is “one of our points of emphasis” this week. “We gotta continue to work on it,” Kafka said. “Just get in and out of the huddle quickly. Get up to the line of scrimmage. That way we can use those motions, we can use those shifts and also give the quarterback more time at the line of scrimmage to operate. Those are things we are working on that we self-evaluated from the game.”