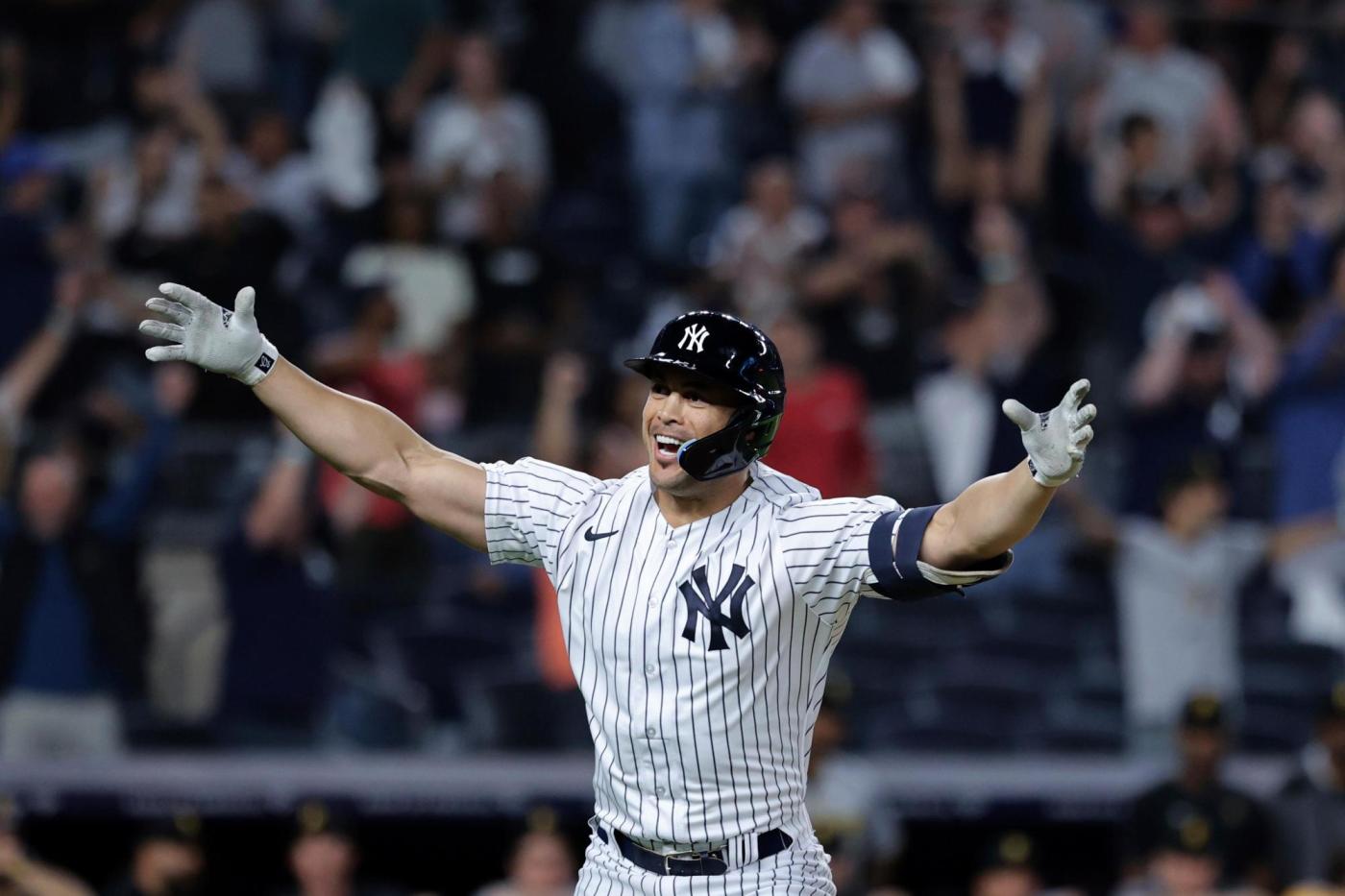 Judge moved within one of Roger Maris’ American League record when he turned on a sinker from right-hander Wil Crowe (5-10) and drove it 430 feet into the left-field bleachers, pulling New York within 8-5.

Judge matched the 60 home runs Babe Ruth hit for the 1927 Yankees to set a big league record that stood for 37 years.

Stanton, mired in a 9-for-72 slump, lined a slam off Crowe to make a winner of Aroldis Chapman (3-3) and set off a raucous celebration at Yankee Stadium.

Harrison Bader had a pair of go-ahead singles and drove in three runs in his debut for the Yankees.

PHILADELPHIA (AP) — Matt Chapman hit a three-run homer in the first inning, Jackie Bradley Jr. added a three-run shot in the ninth and Toronto roughed up Philadelphia with 21 hits.

The Blue Jays have won five of seven and have a firm grip on the top AL wild-card spot. The Phillies lost their fifth straight.

Kyle Schwarber hit his NL-best 40th homer of the season for the Phillies in the eighth, a three-run shot that made it 14-10. J.T. Realmuto hit his 20th homer and went 5 for 5 for the Phillies, driving in two runs and scoring twice.

Toronto had 10 extra-base hits and scored in every inning but the fourth. Zach Pop (3-0) helped the Blue Jays escape the fifth inning with a 7-5 lead.

Kyle Gibson (10-7) got battered around for seven runs and 12 hits over five innings.

ATLANTA (AP) — Travis d’Arnaud broke a scoreless tie with a two-run homer in the fourth inning, Dansby Swanson went deep in the eighth, and Atlanta beat Washington, clinching a playoff berth not long afterward when Milwaukee lost to the New York Mets.

The Braves have won 10 straight games at home, outscoring opponents 47-15 over this stretch.

Charlie Morton (8-6) allowed one run and three hits with three walks and nine strikeouts in 5 1/3 innings.

Kenley Jansen faced seven batters in the ninth, allowing one run before securing his NL-leading 36th save in 43 chances.

Pete Alonso hit his second three-run homer in as many nights as the Mets maintained their one-game lead in the NL East over Atlanta and dealt a blow to the Brewers’ wild-card hopes. The Mets won with just four hits.

Joely Rodríguez (2-4) earned the win with one inning of shutout relief. Edwin Díaz got four outs for his 31st save.

Willy Adames went 4 for 5 with two RBIs and a pair of doubles for the Brewers.

ST. PETERSBURG, Fla. (AP) — Tampa Bay ace Shane McClanahan was pulled in the fifth inning with neck tightness during a loss to Houston.

McClanahan (12-6) was making his second start after returning from the 15-day injured list due to a left shoulder impingement. He allowed five runs for only the second time this season.

Houston starter Cristian Javier (10-9) gave up one hit and won his fourth straight start, striking out six in five innings.

Ryan Pressly got the final two outs for his 29th save in 33 attempts.

LOS ANGELES (AP) — Rookie Miguel Vargas drove in the go-ahead run with an infield single in a five-run eighth inning and Los Angeles rallied for its MLB-leading 44th comeback win in the first game of a doubleheader.

The Dodgers won their fifth in a row and have the majors’ best record at 103-44. They batted around in the eighth and rallied from a 5-1 deficit.

Ryan Pepiot (3-0) got the win. Chris Martin pitched the ninth to earn his second save.

Christian Walker hit his 35th home run and Daulton Varsho also connected for Arizona, which lost for the 20th time in 21 games at Dodger Stadium. Kevin Ginkel (1-1) took the loss.

Wentz (2-2) allowed two hits and two walks in 5 2/3 innings. It was the third time in five big league starts that the rookie has held the opposition scoreless.

Rookie standout Gunnar Henderson hit a two-run homer in the seventh for Baltimore’s first runs of the series.

Austin Voth (5-3) allowed two runs and six hits in five innings for the Orioles, who have lost four of five.

Red Sox rookie right-hander Brayan Bello (2-6) ended a streak of 44 1/3 innings without allowing a homer as TJ Friedl had a solo shot in the third inning. Bello gave up the run and eight hits in five innings.

Cincinnati loaded the bases with one out in the bottom of the ninth. John Schreiber came in and allowed a sacrifice fly but got the final out for his eighth save.

MIAMI (AP) — David Bote hit a tying home run in the seventh inning, then added a sacrifice fly in the eighth that lifted Chicago over Miami.

Esteban Quiroz got the first two hits of his major league career and P.J. Higgins also had two hits for the Cubs, who snapped a three-game skid.

Chicago loaded the bases with no outs without a hit in the eighth against reliever Steven Okert (5-3). Bote then hit a go-ahead flyball.

Giants lefty Carlos Rodón was originally scheduled to start Tuesday but was pushed back to Friday at Arizona because of a blister on his pitching hand.

Tyler Rogers (3-4) pitched two innings for the win and Jarlín García got the final out for his first save.

C.J. Cron homered, doubled and drove in three for the Rockies to set a career high in RBIs with 101.

Colorado starter Kyle Freeland (9-10) was solid for five innings before running into trouble in the sixth.

Dylan Coleman (5-2) pitched a scoreless seventh for the Royals. Scott Barlow cleaned up Jose Cuas’ mess by striking out Mark Contreras to strand runners on second and third in the eighth, then handled the ninth for his 22nd save.

The Royals trailed 3-0 in the second, pulled ahead in the fifth and were still tied 4-all when Melendez doubled off Twins reliever Michael Fulmer (5-6) in the seventh. Bobby Witt Jr. followed with a double, then took third when Melendez tried to score and was thrown out by Twins left fielder Jake Cave on a bang-bang play at the plate.

Perez came through on the very next pitch, though, dumping the go-ahead double down the right-field line.

Minnesota has dropped five of six to begin an eight-game trip, falling well behind in the wild-card race.

Ward doubled into the left-field corner to score Shohei Ohtani from first base off Dennis Santana (3-8), the first of three Texas relievers. Mike Ford and Jo Adell added RBI singles off John King.

With the bases loaded and none out, Max Stassi hit a sharp grounder to third base. Josh Jung fielded the ball and stepped on the base before launching an around-the-horn triple play.