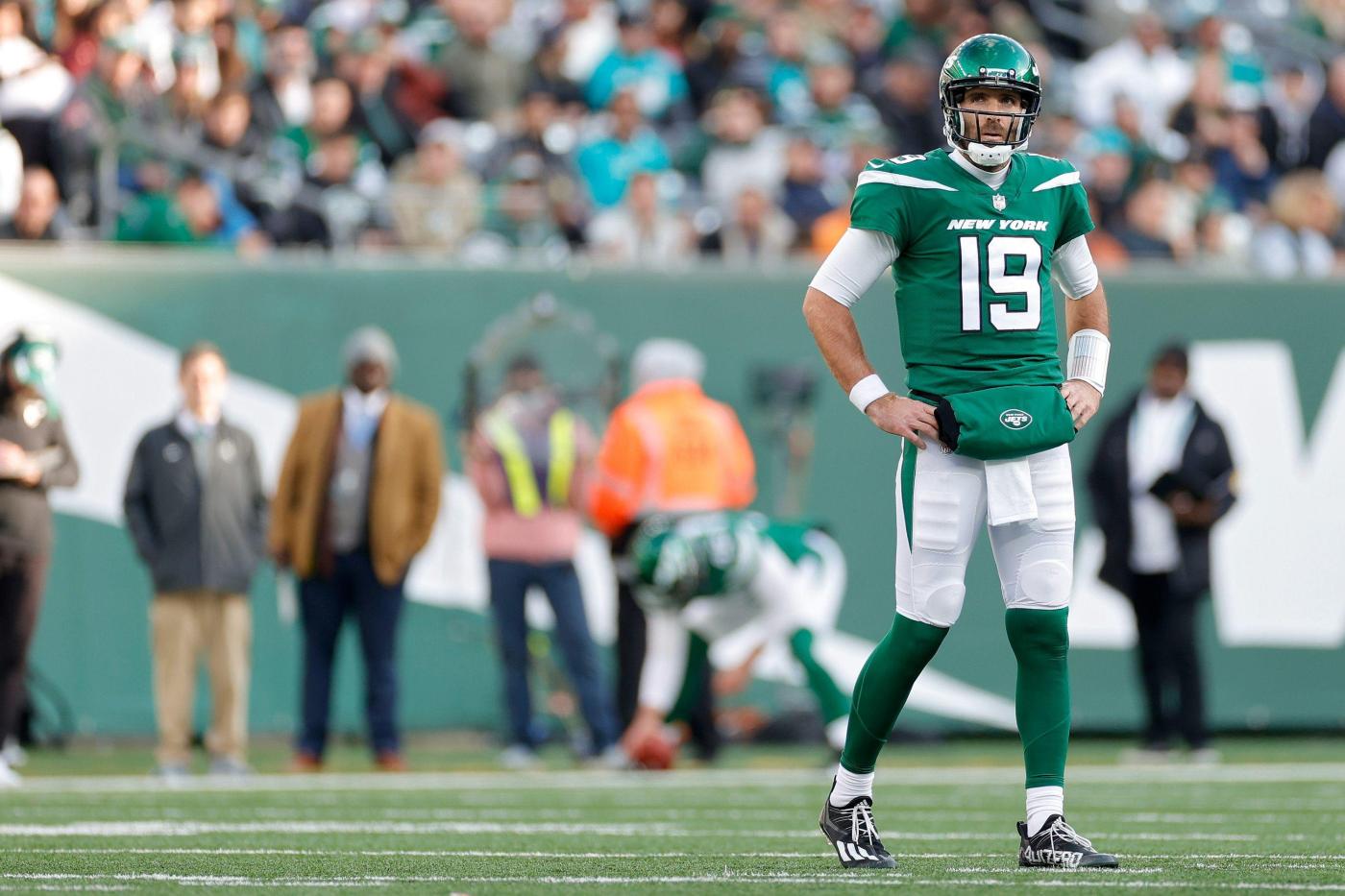 Joe Flacco was supposed to mentor from the sidelines as Zach Wilson’s backup quarterback this season.

Then came the Jets’ preseason opener against the Philadelphia Eagles Friday night.

Wilson suffered a bone bruise and a meniscus tear when scrambling during the Jets’ second offensive drive of the game. The Jets are optimistic Wilson could only miss two to four weeks and still be ready for the team’s season opener against the Baltimore Ravens. However, Wilson could potentially be out longer depending on what is found during his surgery, which will be in Los Angeles on Tuesday.

That likely leaves Flacco to hold down the offense to start the season.

Throughout the preseason, Jets coach Robert Saleh has been on record as saying Flacco has a lot left in his tank. On Sunday, Saleh reiterated his confidence in the 15-year veteran.

“He’s a pro, he’s a veteran, he’s been there, he’s done that,’ Saleh said. “He’s a Super Bowl MVP, he’s a world champion, he’s gotten the big contracts, he’s pretty much checked every box you can check. He knows how to play the game. He’s very calm, he’s collected.

“We had the two-minute drive, very smooth in his operation. He’s a veteran and I just expect him to approach it like he has his entire career.”

Flacco has done it all in his career. He started as a rookie in 2008 and led the Ravens to the AFC Championship before losing to the eventual Super Bowl champions Pittsburgh Steelers. He also looked “elite” at times, including in 2012 when the Ravens won Super Bowl XLVII and Flacco was named the game’s MVP. But Flacco hasn’t performed to that same level the last few years.

In 2018, the Ravens selected Lamar Jackson with the 32nd pick overall and he later supplanted Flacco as the starter during the season while leading the team to the playoffs. A year later, Baltimore traded Flacco to the Denver Broncos in exchange for a fourth-round pick. He started the first eight games for the Broncos in 2019 before a neck injury prematurely ended Flacco’s season.

After Denver released Flacco, he bounced around from the Jets to the Eagles as a backup before being traded back to New York last year after Wilson suffered a knee injury. Now Flacco finds himself in a similar situation playing for Wilson because of an injury.

While Flacco is confident he can still be a 17-game starter in the league, he is enjoying his current role with the Jets.

“I love being here and completely focused on what I’m doing,” Flacco said. “Right now, that’s going out there and practicing and having the best days that I can.

“Whenever I’m out on that field, I push myself to be better and to be able to say I had the best day that I could have. Right now, that’s what I’m focused on.

“I’m happy with what I’m doing and I love helping out a young guy and playing my role with this team. But I wouldn’t be doing this if I didn’t have the desire to be good at what I do. I still believe I can go out and play this game.”

In his two days practicing with the first team offense, Flacco has had his up and down moments. On Sunday, he completed 17 of 19 passes but threw an interception. He followed that up by going 9-for-13, but he also threw a near-interception that Sauce Gardner couldn’t quite haul in.

If Flacco is the starting quarterback for the first few weeks of the regular season, rookie wideout Garrett Wilson is confident in Flacco’s ability to lead the Jets’ offense.

“It is a lot of experience there with Flacco,” Wilson said. “I feel like he takes some paces off and puts some pace on the ball and he does a good job of making passes receiver friendly as they’re pretty easy to catch. He takes some off the ball when you’re running a slant route versus when you’re running an out route and he can put some zip on it, things like that.”

Flacco, who didn’t play in the Jets’ preseason opener against the Eagles, will have two preseason opportunities to possibly get ready for the regular season. New York will host the Atlanta Falcons on Aug. 21 at 8 p.m. and the team will play the Giants to wrap up the preseason.

If Flacco starts against the Ravens Week 1 on Sept. 11, he will play against the franchise that drafted him 18th overall in the 2008 draft and the one he spent 11 seasons with. Many athletes often downplay facing a former team, but Flacco didn’t do that when he was asked about potentially starting against the Ravens and his former coach John Harbaugh.

“It’s so far away, who knows what’s going to happen at this point, but I’ve definitely thought about that a little bit. I’m going to try to make sure it’s not the biggest deal in the world, but I’ve seen guys go through it. It’s a different thing.”