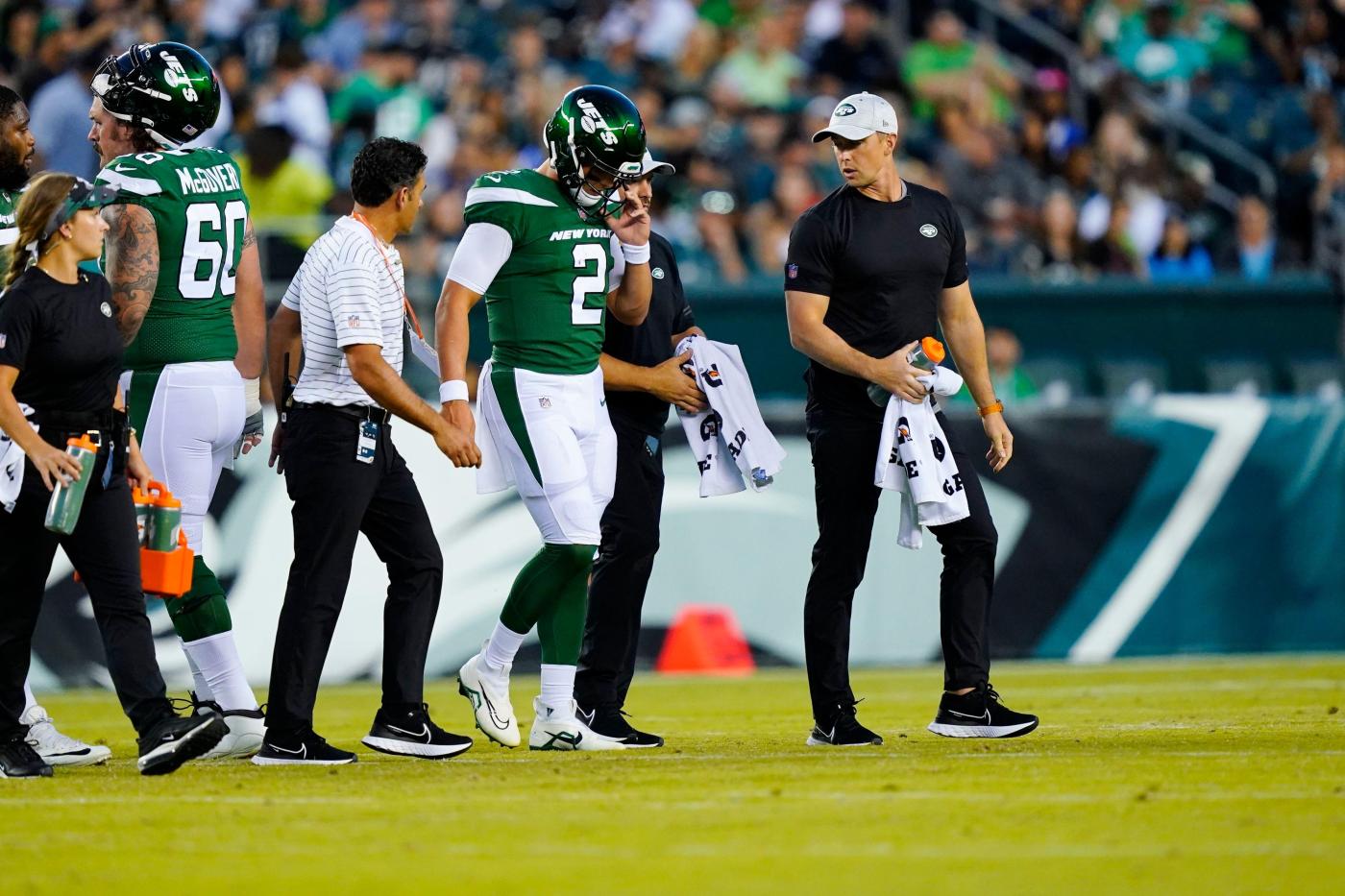 There was another preseason game, August, when the Jets quarterback tried to make a play and ended up on the ground with a bad knee. The quarterback was Joe Namath. He threw an interception to Mike Lucci of the Lions and the play he tried to make — not with the ball, but on the ball — was on a Detroit Lions linebacker named Mike Lucci.

Namath wasn’t lost for the season after the resulting surgery on his left knee. But that Jets season was lost in that moment. And even though not everything has been bad for the Jets since that August game 51 years ago, a lot has been bad. Things were never the same for Namath in New York and the Jets have been looking for the next Namath ever since, and are now hopeful that they might have found one in Zach Wilson.

Who tried to make a play on Friday night against the Eagles in the Jets’ first preseason game for this season. With the ball. Not on the ball.

Wilson’s the Jets’ hot kid, and sometimes plays like a hothead, and he was running toward the sideline on the Jets’ second series — having thrown his own first preseason interception on the Jets’ first series — and instead of running out of bounds, he tried to make a fake on a rookie Eagles linebacker named Nakobe Dean.

Dean never got a chance to tackle him. Wilson went down anyway, a non-contact injury for everybody watching to see. Tried to get back up. Went back down, in obvious pain. He had a knee injury last season, to the posterior cruciate ligament in his right knee. He came back to finish the season, the way Namath came back to play out the last four games of the ‘71 season (the Jets finished 6-8).

Now he goes down on the 12th of August, limps off the field, has tests taken on the knee, was on his way to the MRI on Saturday. And we all waited to see if he is going to be out for weeks, or for the season.

“I couldn’t let him go,” Namath said of Mike Lucci that night.

So a bad week for the Jets got worse Friday night. They had already lost offensive tackle Mekhi Becton (kneecap fracture), the Jets top pick in his draft the way Wilson was in his, when the Jets selected Wilson No. 2.

Becton never made it to the first preseason game. Wilson, whom the Jets desperately want to be their first star in a very long time, didn’t make it through his second series, before the Jets, who are used to bad news, waited to find out just exactly how bad this news was going to be.

Preseason game. August. Quarterback tried to make a play. Ended up on the ground. This isn’t just about the Jets, of course. This is sports, where the next moment is the one that can change so much, and sometimes everything. Namath was the most important player they’ve ever had. He didn’t have as great a career at old Shea as Tom Seaver did. But he was still their Namath, the guy who put them on the map, who won them one of the most famous football games ever played, and their only Super Bowl.

There have been other playoff appearances for them since Namath, no doubt. Ken O’Brien took the Jets to the playoffs and so did Richard Todd. Vinny Testaverde had them within one half of going back to the Super Bowl one Sunday in Denver. Before long, because these were Jets, Vinny got hurt in the first game of the next season. An Achilles injury. He was never the same player he’d been the year before for Bill Parcells.

Chad Pennington had his moments. Mark Sanchez, who was supposed to be the golden boy that the Jets want Wilson to be, twice took Rex Ryan’s Jets to the AFC Championship game.

But still waiting for another Namath. Just not one with fragile knees.

They ended up with the No. 3 pick in the 2018 draft and chose another quarterback from USC, the same place they’d fallen head-over-heels in love with Sanchez. Sam Darnold. That worked out so well that by the time we got around to the 2021 draft, Darnold was in Carolina and the Jets were drafting the baby-faced kid out of Brigham Young who some of my old Jet-fan friends call Jimmy Osmond.

He has movie star looks, has already shown potential to be a tabloid dream, seemed to embrace the big city and the big stage it affords. All of that is still true. None of it changes because he went down with a knee last night. It was still bad news for the Jets that he did. Trying to make a play. His right knee, 51 years and one week after Namath hurt his left against Lucci and the Lions.

They asked Robert Saleh, in his second year with the Jets the same as Wilson is in his second year, if Wilson should have simply run out of bounds instead of trying to fake out a rookie linebacker in the open field.

“One hundred percent,” Saleh said, having watched the nightmare moment for any coach, watching his quarterback go down the way he’d gone down on the second Friday night in August.

Saleh didn’t know how bad it was at the time. He just knew it wasn’t good. Knew it was more bad news for a team that has been one of the pro football capitals of bad news for a very long time.

The Jets don’t just need a young quarterback whom they think can lift them up the way Josh Allen has lifted up the Bills, Allen being the quarterback the Bills selected four picks after the Jets took Darnold. The Jets need a star. New York and New Jersey need a star in pro football, because there hasn’t been one over there in the Meadowlands since Eli Manning was winning the Giants their last Super Bowl, in 2012 in Indianapolis, a game that is starting to feel as if it was played in 1912.

We’ve got stars in baseball this season, on two first-place teams. We’ve got Aaron Judge leading the world in home runs, we’ve got Pete Alonso and Francisco Lindor, we’ve got a pair of aces at Citi Field named Max Scherzer and Jacob deGrom. But coming out of training camp and on our way to September, there was one player, above all the others that people wanted to see, and that was Baby Face Wilson.

Then he actually had to start playing the season, even if it was just the preseason. In August of 2022, 51 years after Namath was just a Jets star but still the biggest star in the league, the kid tried to do what Namath did that night against Lucci.

Tried to make a play.

AGE CAUGHT UP WITH SERENA, LINDOR SHOWS UP EVERY DAY & ROOTING FOR GALLO …

Serena Williams was, and is, a transformative American athlete, with a thrilling and remarkable American story — so much more than a sports story – that began with her sister and her father, King Richard, in Compton, Calif.

She says that this upcoming U.S. Open will be her farewell, which means it will be even more emotional for the Open crowds than it was when their darling, Andre Agassi, said goodbye.

But here is something she wrote in a Vogue article the other day:

“If I were a guy, I’d be out there playing and winning while my wife was doing the physical labor of expanding our family.”

She’s 40, about to turn 41, the same age as Roger Federer, another transformative tennis player.

Roger’s got a wife, so how come he’s not out there playing and winning these days?

Serena has been one of the great, charismatic, compelling, inspirational American athletes of all time, in any sport.

But it isn’t simply motherhood that has held her back from getting to her 24th major singles title, and catching Margaret Court.

Kim Clijsters managed to win three majors as a mom in this same generation.

In Serena’s last four Grand Slam singles finals, she has been straight-setted in every one, by Naomi Osaka and Angelique Kerber and Simona Halep and Bianca Andreescu, by a combined game score of 49-24.

Of course, everybody who loves tennis hopes she has one more run in her at Arthur Ashe Stadium, and she carries the thing the way she used to.

Maybe she can be what she used to be one last time, and so much more than she has been lately.

But what’s happened to her is not because she’s not a guy.

She just got old, and got hurt.

Happens to the best of them.

What’s this world coming to when stealing classified nuclear documents is treated like some kind of crime?

My friend Stanton is wondering how Aaron Rodgers worked it out that he’s afraid of vaccines, but not psychedelic drugs.

You know something for which Francisco Lindor doesn’t get nearly enough credit?

He’s there for the Mets every day.

“He posts up,” is the way Buck Showalter puts it.

There’s this notion now that it was the Yankees themselves who were saying that their only competition a couple of months ago was the baseball gods.

The Yankees sure do burn through relief pitchers, don’t they?

If you only find Daniel Vogelbach interesting because of the way he looks, you’re missing the point, about a really interesting and charming young guy.

Edwin Diaz’s walk-up music, with the trumpets blaring and rocking the house, is the best of all time.

Who isn’t rooting for Joey Gallo to turn his career around in Los Angeles.

So he fell down here.

A lot of guys have.

It’s not a felony.

I keep waiting to hear that the Saudis want to start throwing money around in college football.