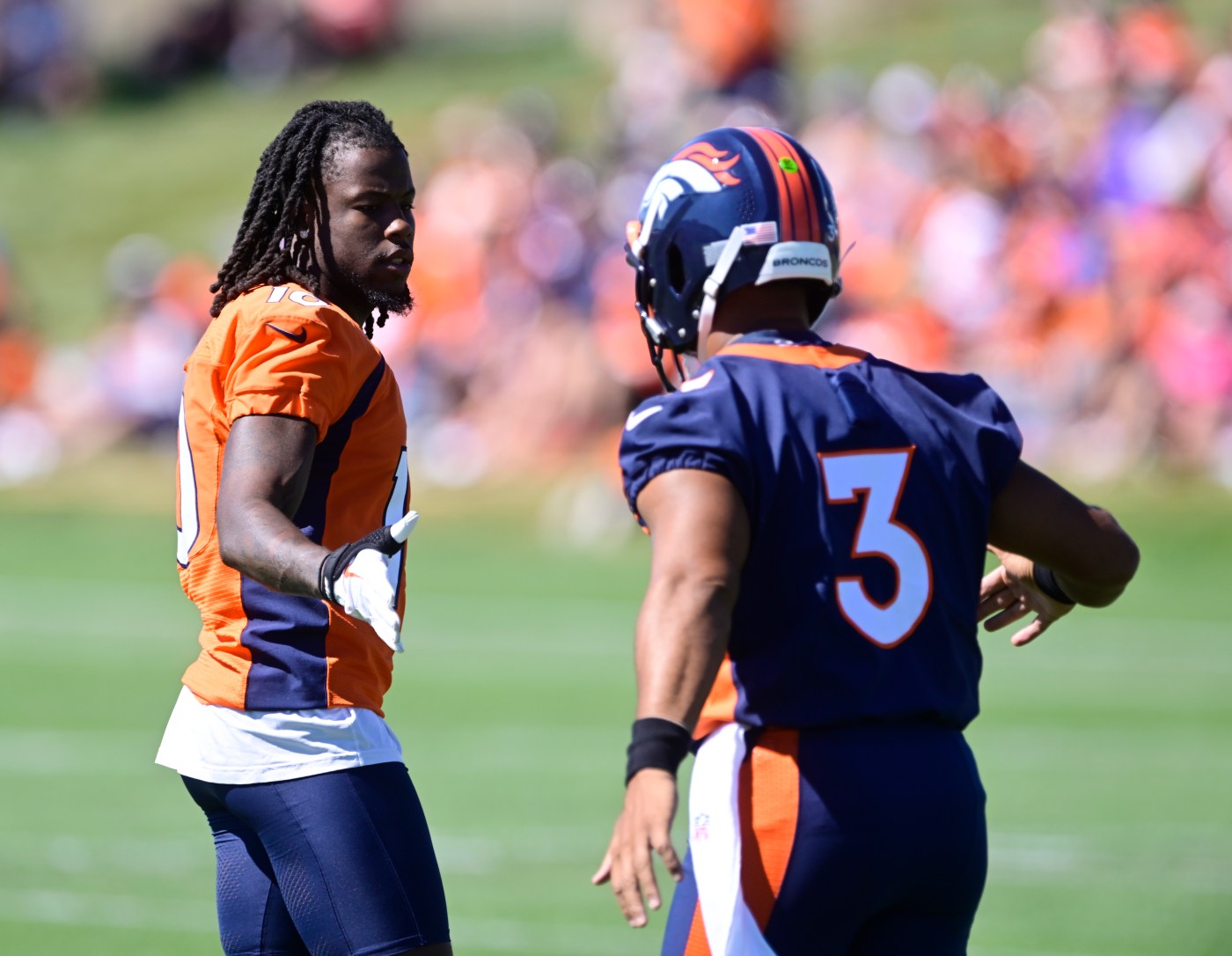 Russell Wilson, you can set your watch to. Melvin Gordon and Javonte Williams, health permitting, will be the sort of two-headed monster that drives fantasy managers crazy … and drives the beat writers who have to answer questions from said managers on their usage even crazier.

To wit: The third-year wideout out of Alabama appeared in 10 games in orange and blue last fall. When No. 10 touched the ball five or more times, the Broncos went 4-1 and averaged 25 points per game — a scoring clip which should, more often than not, do the trick with this defense.

In the other five games that saw the former first-round draft pick touch it four times or fewer, Denver went 1-4 and averaged 16.8 points. In other words, Shurmur ball.

Just as the defense will likely rise and fall with the fates of pass-rushing ace Bradley Chubb, Jeudy can’t just be a “guy.” He doesn’t necessarily have to be a No. 1 — not with the kind of rainbows flying like the dime Big Russ dropped to Courtland Sutton toward the end of practice at UCHealth Training Center Monday morning.

But it’s time for the King of Separation to become the King of Conversions. It’s now or never, baby.

In Wilson, Jeudy’s got the kind of franchise signal-caller calling the shots that the Front Range has been pining for since Sheriff PFM hung up his chaps.

No more playing the Drew Lock Lottery. No more wondering if the pass was going to sail high, sail wide, or sail into the hands of the nearest safety. No more “Steady” Teddy Bridgewater checkdowns.

DangerRuss is here to move the sticks. He’s here to make that giant scoreboard something Broncos Country points to again whenever the Chiefs, Raiders and Chargers roll into town.

Patrick became the first major injury casualty of camp last week, suffering a torn right ACL that ended his season before it had even left the starting blocks.

“We can’t go about replacing (those numbers) with just one guy,” new offensive coordinator Justin Otten offered Monday. “So as an offense, you have to get creative.”

Creative? Former OC Pat Shurmur’s idea of “getting creative” was using a colored pencil for his game plans instead of a standard No. 2.

In the hands of an even remotely competent and forward-thinking offensive mind, Jeudy should be the Broncos’ Deebo Samuel. He should be a do-everything, line-up-anywhere first-down machine who keeps opposing linebackers gassed and defensive coordinators awake at night.

“We do so many things — (we) want to see how much we can push him on, how many different places we can put him, how many different routes he can run,” Hackett said Monday. “And then, you know, once we get to the game, we’ll kind of siphon that stuff down. But right now, we just want to throw everything out there and see what he can do.”

Jeudy’s rookie deal expires after next season, and second contracts are for keepers. Green Bay gave Davante Adams a four-year, $58 million extension in December 2017, bumping him up from a rookie deal worth an average of $983,000 a year as a second-round pick to an average of $14.5 million.

In September 2019, ex-Kansas City speed merchant Tyreek Hill saw his contract bumped from a rookie deal worth an average of $646,500 per season to a three-year extension for $54 million ($18 million/year).

“With him and anyone else, when an opportunity arises in the room, in a competition or pushing for a spot, or being the lead guy, you know, that has to be on a consistent basis,” Otten said of Jeudy. “And I think Jerry’s been coming along a lot better than he did in OTAs. I think he feels more comfortable with Russ. (And) the expectations of Russ, he’s meeting them more.”

There’s a gap that needs filling in this offense, right here, right now. Whatever you thought of Patrick’s ceiling, the floor more than made up for it. Big 81 was, above all else, dependable. Third-and-6. Red zone. Money time.

Patrick’s drop percentage last season for on-target balls, according Pro-Football-Reference.com, was a miniscule 3.5. His QB’s passer rating when targeted, per Pro Football Focus: 102.2. His plays inside the red zone, per PFR: 11, with four first downs and two touchdowns.

Jeudy’s QB passer rating in 2021 when targeted: 89.0. His plays inside the red zone, per PFR: three, with no first downs or touchdowns to speak of.

In the NFL, when opportunity meets dependability, it doesn’t just equal job security. It equals respect.

When Jeudy finds that sweet spot, the sky’s the limit. Because if he can’t, Big Russ ain’t waiting around. There’s a four-letter word for teams that need to use the AFC West for on-the-job training: Last.