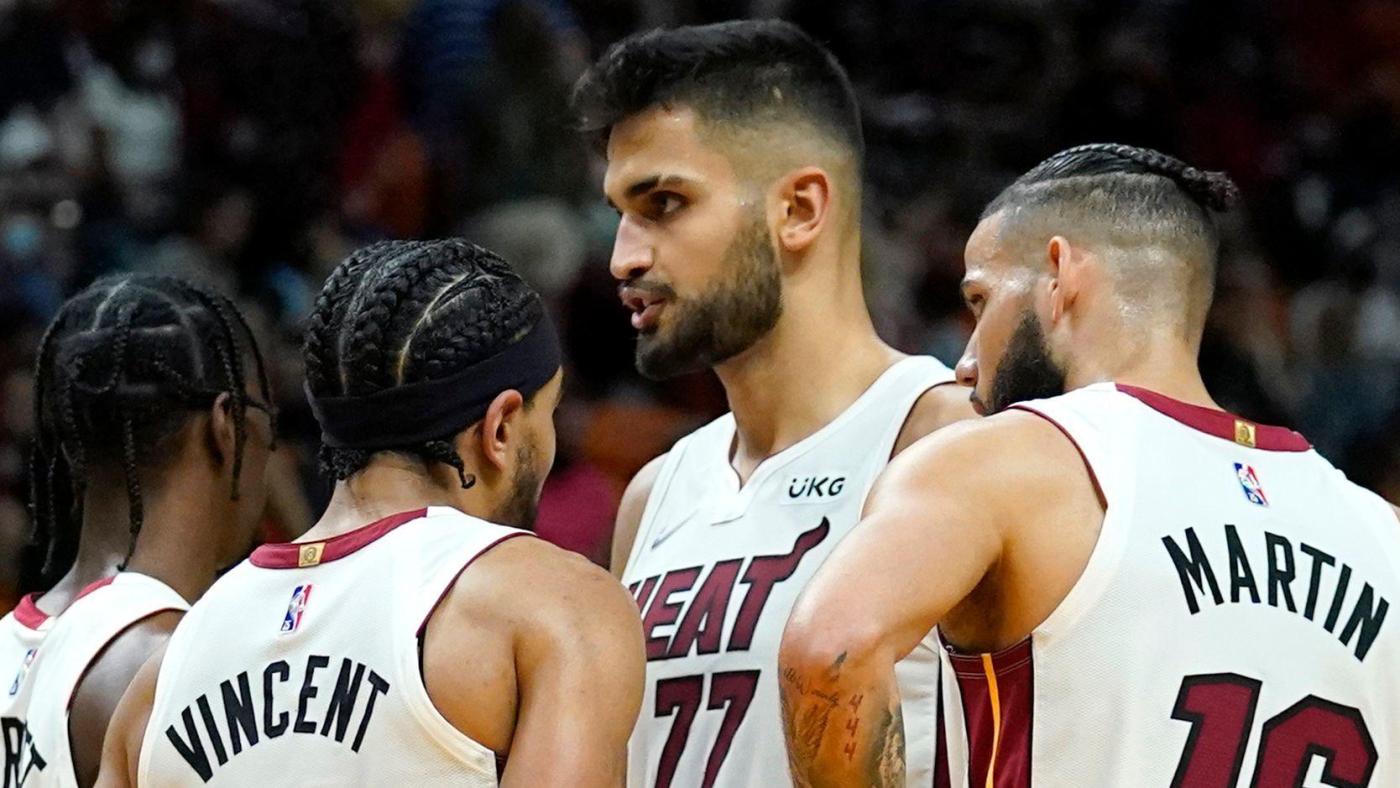 The NBA is liberal when it comes to the offseason roster limit.

The Miami Heat are nonetheless approaching that threshold.

Based on where the Heat stand contractually, 16 of their 20 allowable offseason roster spots currently are filled, with a case that could be made that almost all are accounted for.

Of those, the only deal not fully guaranteed for the upcoming season is that of Highsmith, who has a rolling series of guarantee dates.

In addition, the two allowable two-way contracts currently are held by Mychal Mulder and Javonte Smart.

Then there is the Exhibit 10 training-camp contract signed by undrafted center Orlando Robinson, bringing the current total of signed players to 16.

Factor in what seems as an inevitable 20th season for Udonis Haslem, who has been spending time with the team at the NBA Las Vegas Summer League, offering instructional tips, and it leaves only three open offseason spots.

From there, the Heat typically invite productive summer-league players to camp, with Marcus Garrett, having worked his way back from January wrist surgery under the team’s guidance, almost assuredly to be offered a shot at another Heat training camp.

In other words, it could be as simple going forward, barring trades, as adding two more names to their list and the Heat then heading to training camp in late September with those 20.

Should the Heat opt to work under a hard cap for the coming season, there remains the $4.1 million bi-anniual exception that could be put in play for as much as a two-year, $8.4 million deal to a free agent, as well as the remaining $4 million from the mid-level exception for another free agent.

As always, teams also are allowed to offer minimum contracts without regard to the cap, provided roster space remains. Trades could also, of course, also change the math.

Teams must trim to a maximum of 15 players under standard contract plus a maximum of two on two-way contracts by the start of the regular season.

For now, the Heat are allowing the prospects on their summer-league roster to give it their best shot, with play in Las Vegas continuing through the weekend.

Heat assistant Malik Allen, who is guiding the Heat summer roster, said the plan is to explore all the possibilities of those currently with the team in Las Vegas, with lesser prospects often featured in such closing games.

“Guys have been good,” Allen said ahead of Tuesday’s game against the Atlanta Hawks’ summer roster on the UNLV campus. “And the next couple days, guys are going to get their chances, for sure.”

For some on the summer roster, their next Heat experience could come with the team’s G League affiliate, the Sioux Falls Skyforce. For others, it could be time overseas or tryouts in other teams’ training camps.

The Heat can designate up to four players to funnel to their G League team with Exhibit 10 contracts, with Robinson receiving the first of those, provided those players first make it to Heat training camp.

“Luckily, we got a good group,” Allen said. “Everybody has been great, been understanding of the situation that they’re coming into, which is what you would hope in the summer league. The message is you got to be ready. You don’t want that opportunity to pass.

“This is the prime time where you get your foot in the door with us or whoever is watching. You just have to be ready.”

To a degree, Allen’s own story reflects those he currently is guiding, having gone undrafted out of Villanova in 2000 and then beginning his pro career with the minor-league San Diego Wildfire and Trenton (N.J.) Shooting Stars.

“I know it all too well,” he said of what chances such as these in Las Vegas can mean. “I think that everybody has been really, really good about it. The next couple of days, they’re going to have opportunities with some extended minutes to play.”