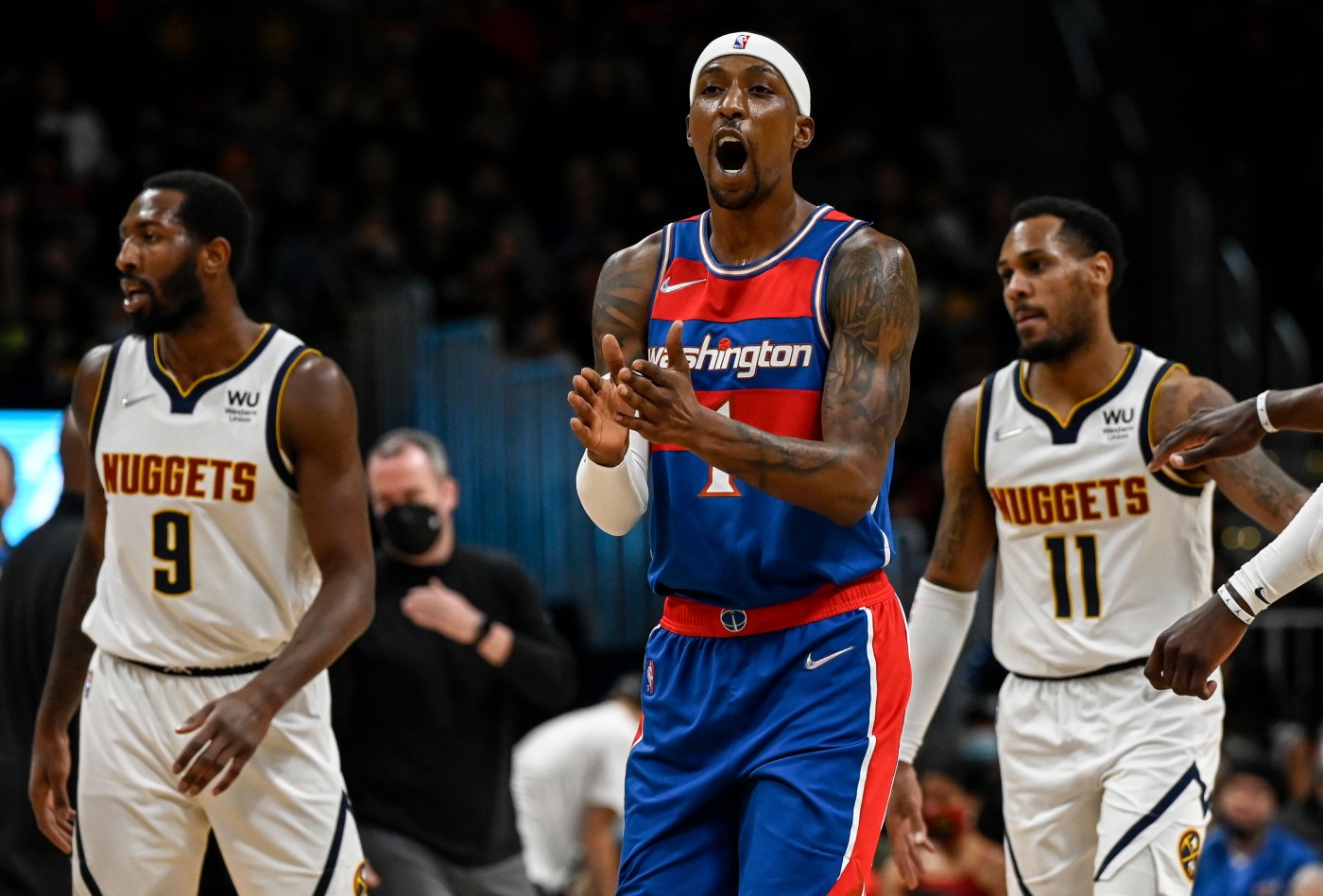 LAS VEGAS – Wearing a bucket hat and hunter green t-shirt, Kentavious Caldwell-Pope grabbed the basketball at Cox Pavilion and made himself right at home.

The Nuggets’ new shooting guard waited until the court was clear during Denver’s Summer League exhibition on Sunday before lining up a 3-pointer from the wing. He didn’t convert his initial look, but he didn’t stop shooting until he’d buried his first unofficial 3-pointer as a Nugget.

Caldwell-Pope, who joined the Nuggets by virtue of a recent trade with Washington, was there to greet his new teammates and head coach Michael Malone. Caldwell-Pope sat courtside next to Zeke Nnaji, Davon Reed and several assistant coaches.

Cool thing that maybe I’m the only one who cares about: Zeke wasn’t sitting with the rest of the guys and Malone but went over, introduced himself to KCP and took a seat. (Side note: Malone has (jokingly?) been talking to SL coach Ryan Bowen during the game). pic.twitter.com/UDxV0rVGHe

Prior to the game, Caldwell-Pope held court with local media in what amounted to his introductory press conference. Aside from instantly winning over the fan base when he proclaimed the Nuggets would’ve beaten Caldwell-Pope’s Lakers had Anthony Davis’ not hit a stunning game-winner in Game 2, Caldwell-Pope sung the praises of his new organization and said, repeatedly, how excited he was to be joining a contender.

That Western Conference Finals series left Caldwell-Pope with a distinct impression of the Nuggets.

Last season, the Wizards were stuck on the outside looking in at the postseason – a stark contrast for Caldwell-Pope, who’d won a championship just two seasons prior with the Lakers in the Bubble.

“I’m excited just to be able to compete again and compete for a championship,” he said.

Caldwell-Pope seemed enthused that his defense and outside shooting might be able to lift his new team to where his old one went.

He knows he’ll be relied upon to space the floor alongside Nikola Jokic, while simultaneously handling opponents’ best guards. But having won a championship, the Nuggets also want him to share his corporate knowledge. They want him to hold his teammates accountable, promote the work ethic that he saw alongside LeBron James and help lead. After all, the Nuggets tried to nab Caldwell-Pope at the trade deadline, but instead waited until the offseason to land their guy.

It cost them Monte Morris, a beloved figure in Denver’s organization, and Will Barton, whose inconsistent play left the Nuggets lacking in the backcourt.

Surprisingly, Caldwell-Pope seemed to be taken aback by the trade.

“My initial reaction was surprise because what me and my team and the Washington Wizards was talking about and communicating was different,” he said. “It was a surprise.”

Since the news broke in late June, Caldwell-Pope had to process being traded for a second time while also facilitating another move – and finding schools – for his three sons. He’s connected with gregarious guard Bones Hyland but outside of that, he hasn’t made deep inroads into the Nuggets’ locker room quite yet.

That was the least of his worries as he settled into his new surroundings with his new teammates.