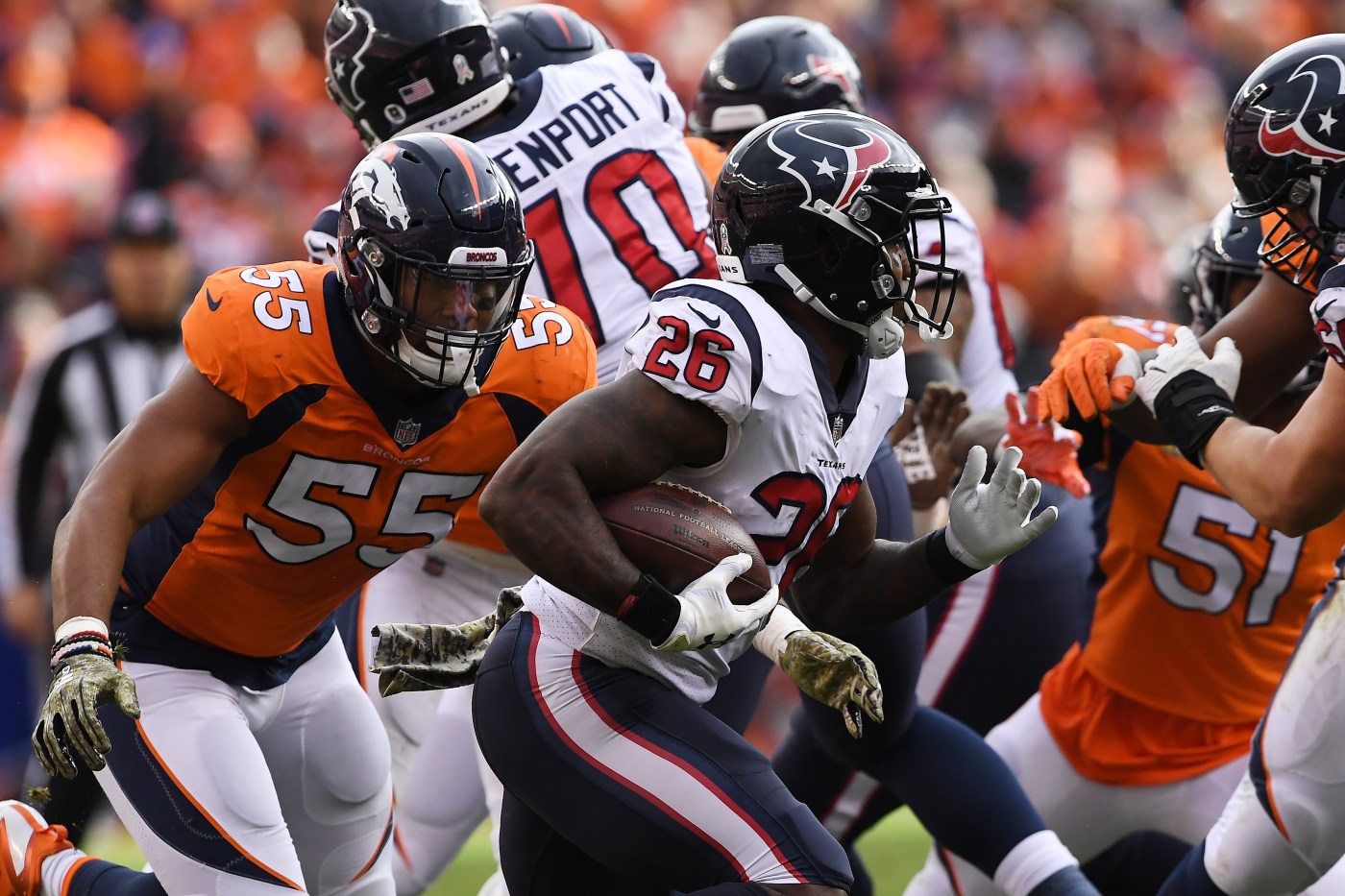 After drawing a matchup with Seattle’s D.K. Metcalf in Week 1, Broncos cornerback Pat Surtain II will be tasked with covering another premier receiver in Week 2.

Surtain, arguably the Broncos’ best defensive player in just his second year, will be responsible for Texans’ No. 1 receiver Brandin Cooks when in man coverage on Sunday.

Cooks had seven catches for 82 yards in the Texans’ Week 1 tie with the Colts. The ninth-year pro has surpassed the 1,000-yard mark six times in his career, and has the ability to burn defenses on all variations of short and deep routes.

Head coach Nathaniel Hackett believes Surtain, whom he labeled “a premier player,” will be up to the task after how he covered Metcalf last week. Metcalf did have seven catches for 36 yards on seven targets, but was kept from the game-breaking play, as his longest reception was 15 yards.

“I thought he did great (against Metcalf),” Hackett said. “One of our goals was to be able to limit (Seattle’s top receivers) in their explosiveness. (Surtain) did, and he rose to the challenge. I look forward to that all season.”

Hackett acknowledged Cooks, who has 46 career touchdowns, brings “a lot of juice.”

“We all know what he’s done in his past at all the teams that he’s been with (the Saints, Patriots and Rams),” Hackett said. “He’s an unbelievable vertical threat. We’re going to have to know where he is at all times because we know they’re going to try to throw him the ball down the field.”

Who has the edge?

Even though Russell Wilson couldn’t lift the Broncos to a win in Week 1 in Seattle, there’s no lost faith in No. 3 within Denver’s locker room. Look for him to target his receivers more this week. Texans’ second-year QB Davis Mills is 2-9-1 in 11 career starts. Edge: Broncos

Melvin Gordon paced Denver with 58 rushing yards last week, and Javonte Williams chipped in 43 more to put Denver over the century mark. Houston has the tailback combination of Dameon Pierce and Rex Burkhead, who aren’t near as good on paper. Edge: Broncos

Jerry Jeudy got off to a roaring start with 104 yards receiving and a touchdown against Seattle, but Denver needs to get him and Courtland Sutton more involved. KJ Hamler (knee/hip) is out. Houston features game-breaking wideout Brandin Cooks. Edge: Broncos

The Broncos’ line was inconsistent in Week 1. Graham Glasgow will start at right guard for Quinn Meinerz (hamstring); Cam Fleming possible at right tackle for Billy Turner (knee). Houston’s led by tackle Laremy Tunsil, who lost most of ’21 to a thumb injury. Edge: Even

D.J. Jones and Mike Purcell are run-stuffing forces, while Dre’Mont Jones can also be a game-changer. Houston’s rush is less certain, and the Texans will need to generate more push against the pass and the run than they did while getting gouged in Week 1. Edge: Broncos

Justin Simmons is on IR with a quad injury, meaning Caden Sterns will start at safety opposite Kareem Jackson, and P.J. Locke will play the nickel. Pat Surtain II will cover Brandin Cooks. Houston has cornerback Derek Stingley Jr., this year’s No. 3 overall pick. Edge: Even

The Broncos had numerous special teams mishaps in Week 1, including returner Montrell Washington taking a kick out of the end zone he should’ve knelt, and Brandon McManus missing the game-winning kick. Houston’s kicker is veteran Ka’imi Fairbairn. Edge: Even

Tale of the tape

67 — Career offensive touchdowns for Melvin Gordon, who needs one more score to tie Ezekiel Elliott and Alvin Kamara for the second-most offensive TDs by an active running back since 2015.

94 — Career receptions by Jerry Jeudy, who needs six catches to reach 100 for his career and 75 yards to reach 1,500 career receiving yards.

66 — Consecutive games that safety Justin Simmons started before being sidelined this week (and for at least the next three) with a quad injury.

11 — The number of combined fumbles between Melvin Gordon and Javonte Williams in their tenures as Broncos — Gordon eight in three seasons, Williams three in two seasons. Both running backs lost a fumble at the goal line in Week 1.

37 — That’s how many “big play” receptions (25 yards or more) Courtland Sutton’s had since the start of 2018, ranking fourth among AFC receivers over that span.

Don’t take the points. It’s a wide spread for an offense that is still going through growing pains, even if the Broncos are facing off against a subpar Texans defense. Houston is bound to keep it within shouting distance, even if the game’s not really competitive from the get-go.

Bet the under. With the Broncos offense still finding its identity under Russell Wilson, and with the Texans trotting out an unseasoned QB in a loud and intimidating environment, the defenses will set the tone on Sunday and keep this thing under 40 points.

OK, after punting on the preseason, rookie head coach Nathaniel Hackett finally got in a practice game at Seattle to work out the glitches, including the malfunctioning of his brain under the duress of those tense final seconds in the fourth quarter. Now, with a loss on his permanent record, are the Broncos ready to play some serious football? I think so. And Hackett better hope so.

The Broncos’ passing game finds its rhythm, with Jerry Jeudy getting another TD and tight end Albert Okwuegbunam hauling in his first TD of ’22. The game is not as close as the score indicates, as Denver will own the first half in front of a raucous home crowd. Nathaniel Hackett gets his first win as Denver’s head coach and puts last week’s game management controversy behind him.

Is this a must win for the Broncos? Dang right it is. A team can’t start 0-2 in the AFC West and think they have a chance at competing for a playoff spot. The best route to covering the double-digit spread is being bold early (how about some no-huddle/hurry up?) to get the Texans gassed at altitude and building a two-possession game, which will allow Bradley Chubb and Randy Gregory to set their collective pass-rushing sight on quarterback Davis Mills.

Houston, you have a problem. Denver coaches just put up with a week of national shaming on television, never mind the grilling from the local scribes. Did Seattle expose some — OK, many — of the Broncos’ leaks? Heck, yeah. But Houston QB Davis Mills is 1-4 on the road in his young career while his teams have been outscored 141-45. If the Orange & Blue can hang on to the dang ball, Russ cooks.