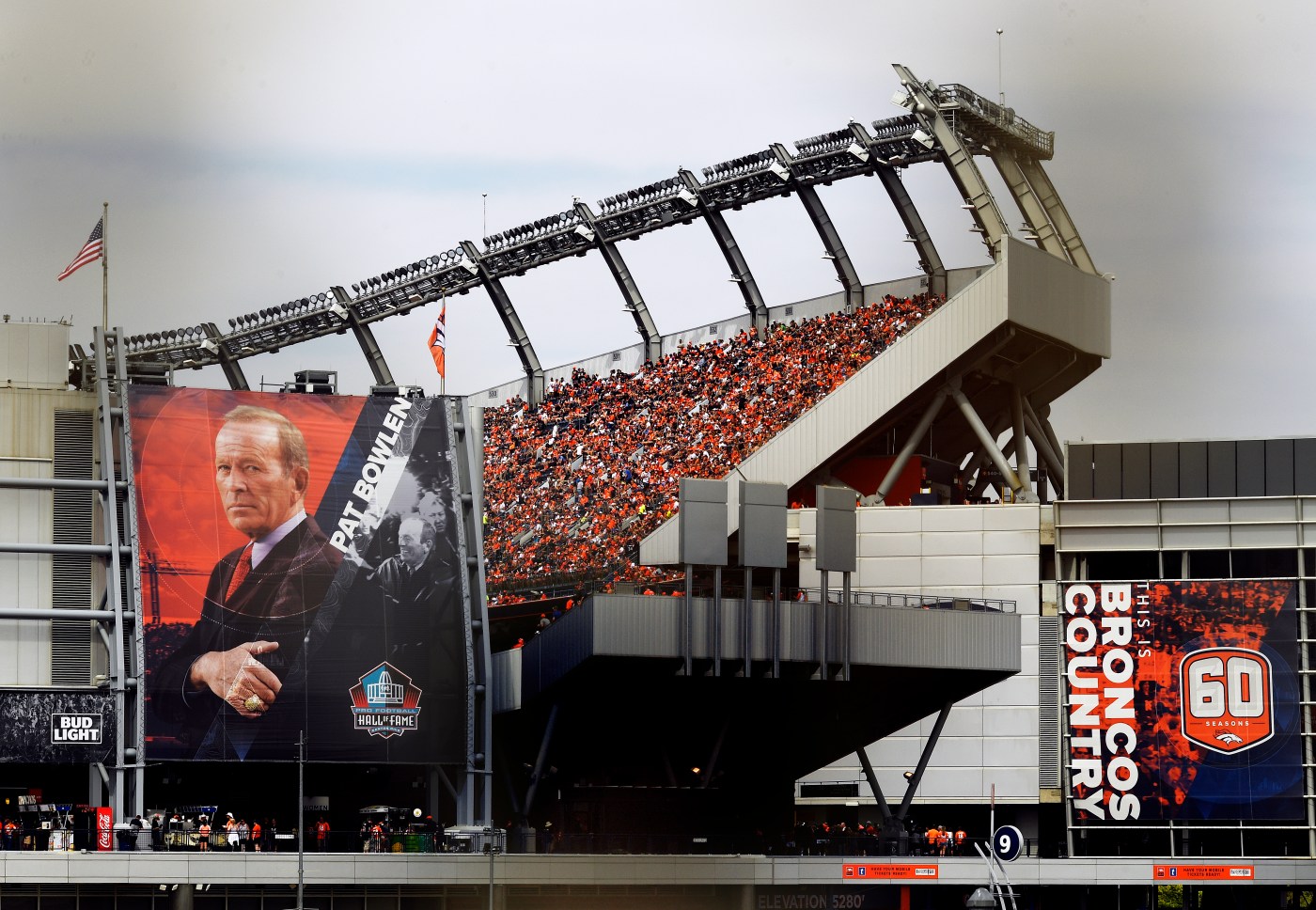 The Broncos entered into a sale agreement with the group led by Rob Walton and Greg Penner late Tuesday night. How did the franchise get to this point? A timeline:

July 2013: Bowlen relinquished day-to-day control of the Broncos due to Alzheimer’s and his controlling ownership was placed in a family trust overseen by Broncos president/CEO Joe Ellis, team counsel Rich Slivka and Denver attorney Mary Kelly. (Pat owned 77 percent of the team; his brother John owned the other 23 percent).

May 31, 2018: Beth Bowlen Wallace, the second of Pat’s two children with Sally Parker, said she was “ready right now,” to take over the Broncos and her succession plan included a “short transition and mentoring period with current Broncos leadership.” Within hours of Wallace’s announcement, the trustees said they “thoroughly evaluated” her qualifications and had declined to name her Pat Bowlen’s successor.

July 27, 2018: Ellis told reporters that Brittany Bowlen, one of Pat’s children with wife Annabel, had “expressed an interest,” in serving as her father’s successor.

Oct. 20, 2018: At a charity event in Denver, Brittany Bowlen revealed publicly for the first time that she would like to succeed her father.

Oct. 25, 2018: Bill Bowlen, Pat’s brother, filed a lawsuit in Colorado District Court to remove the trustees from power, “due to their failure to uphold Pat Bowlen’s wishes and act in the best interest of Pat Bowlen, his family, and the Broncos.” Bill Bowlen said his brother began to “display signs” of Alzheimer’s “in or around 2006” and was diagnosed that year in Arizona.

Nov. 23, 2018: The trustees submitted a response to Bill Bowlen’s lawsuit, requesting a stay in the proceedings. They also requested Wallace and her sister, Amie Klemmer (Pat’s oldest child) — who were not a part of their uncle’s lawsuit — enter into arbitration via the NFL and the league would have the power to decide if the trustees are properly serving Pat Bowlen’s wishes. Richard Robinson, the attorney hired in March 2007 by Pat to review his estate plan and provide recommendations, signed an affidavit stating Bowlen “was fully engaged in the process, understood the provisions … and signed those agreements.” Robinson also said Pat was aware of the conflicting roles of the trustees, but supported the set-up.

Dec. 8, 2018: Bill Bowlen filed an objection to the trustees’ response, saying his lawsuit should proceed on a different path than their arbitration request. The filing said the trustees’ request was “nothing more than a delay tactic.”

Dec. 12, 2018: In Arapahoe County District Court, Pat’s wife Annabel filed a motion to intervene in the litigation involving Bill Bowlen and the trustees. That would allow her attorneys to be present for closed-door sessions.

Jan. 30, 2019: Asked at his Super Bowl news conference if he will grant the arbitration request, Commissioner Roger Goodell said the league “may be involved” in resolving the dispute. “It’s sad when disputes like this occur,” he said. “It’s not something I think Pat Bowlen — who I knew very well — would have wanted.”

Feb. 20, 2019: Wallace and Klemmer file a petition centered on the trust’s validity and its no-contest clause, which is believed to state that any person who challenges the trust or Pat Bowlen’s will or power of attorney would be disinherited. If Wallace/Klemmer were declared to be in violation and disinherited, their right as beneficiaries would skip them and go to their children. Wallace and Klemmer asked the court to rule the no-contest clause doesn’t apply to NFL arbitration so they would not be in violation of the clause.

March 25, 2019: At the NFL’s annual meeting in Phoenix, Ellis said Brittany Bowlen was poised to re-join the Broncos, “by the end of the year or within the year,” and would serve in a “senior management position,” with the team.

March 26, 2019: Goodell announced former NFL executive Carmen Policy had been selected as the arbitrator and began his look into the dispute the previous month. The trustees wanted Policy to decide if their approach to selecting a new controlling owner is in-line with Pat Bowlen’s wishes.

Aug. 31, 2019: Scipione issued a temporary injunction saying the issue of Pat Bowlen’s competency was off the menu of things the trustees wanted the NFL to rule on. This was a win for Klemmer and Bowlen Wallace. Scipione said NFL arbitration could begin in November 2019, but “proceed at your risk.”

Nov. 25, 2019: The Broncos announced Brittany Bowlen would return to the organization Dec. 2 as Vice President of Strategic Initiatives.

Dec. 30, 2019: Ellis said if Brittany Bowlen does not rise to the role of controlling owner, the next move would be for the trustees to put the team up for sale. Ellis said approval by all Bowlen children “may not be a requirement, but it’s going to be necessary,” for Brittany to take over as controlling owner.

Jan. 29, 2020: Goodell said the NFL’s goal is to follow Pat Bowlen’s “wishes” and keep the team in the family. “I don’t think he’d be happy about the public disputes that are going on,” Goodell said.

May 2020: Unrelated to the trustees’ trial against Klemmer and Wallace, James Kilroy of Snell & Wilmer law firm sent Slivka a letter on behalf of his client, the estate of late Broncos owner Edgar Kaiser, that it receive “notice” and have right of first refusal if the team named a new controlling owner or was sold.

Aug. 6, 2020: Citing COVID-19 concerns, Scipione moved the Sept. 1, 2020, start date to July 12, 2021, opting to have the trial conducted in-person instead of remotely. By this point, depositions had been completed virtually. The trial would be a bench trial (Scipione will make the ruling) and not trial-by-jury.

Dec. 2, 2020: After the Broncos fell to 4-7, Bowlen Wallace issued a lengthy statement that read, in part: “Watching these past few seasons has been extremely painful and we continue to see no other way to restore the franchise but through a transition of ownership of the Denver Broncos. My father would have never accepted the team’s current state. … We have been committed to and will continue to pursue resolutions on all issues in order to ensure a smooth and timely transition.” The trustees’ team respond by saying no decision will be made until after the trial is completed.

Jan. 5, 2021: During an end-of-season news conference, Ellis said: “We’re ready to go to court in July and get it resolved and we’re confident we will prevail and the trust will stand up and we’ll be able to make a decision soon thereafter.”

Jan. 25, 2021: In Denver District Court, lawyers representing the Broncos’ parent companies ask a judge to rule Kaiser’s estate does not have the right of first refusal of any sale.

April 26, 2021: Brittany Bowlen is promoted to senior vice president of strategy by the Broncos. Her duties include leading all senior staff meetings and she reports directly to Ellis.

Jan. 11, 2022: The last remaining hurdle for the Broncos to be put on the market was removed when Denver’s Second District Court ruled that Kaier’s right of first refusal provision was not transferrable.

Feb. 1, 2022: The Broncos are officially put up for sale. Ellis said the goal is to have a new owner in place by the start of the regular season in September.

May 2022: Four ownership groups visit the Denver area to meet with club officials and tour the team’s headquarters and stadium.

June 7, 2022: The Broncos enter into an agreement with the ownership group led by Rob Walton and Greg Penner for a record price of $4.65 billion.