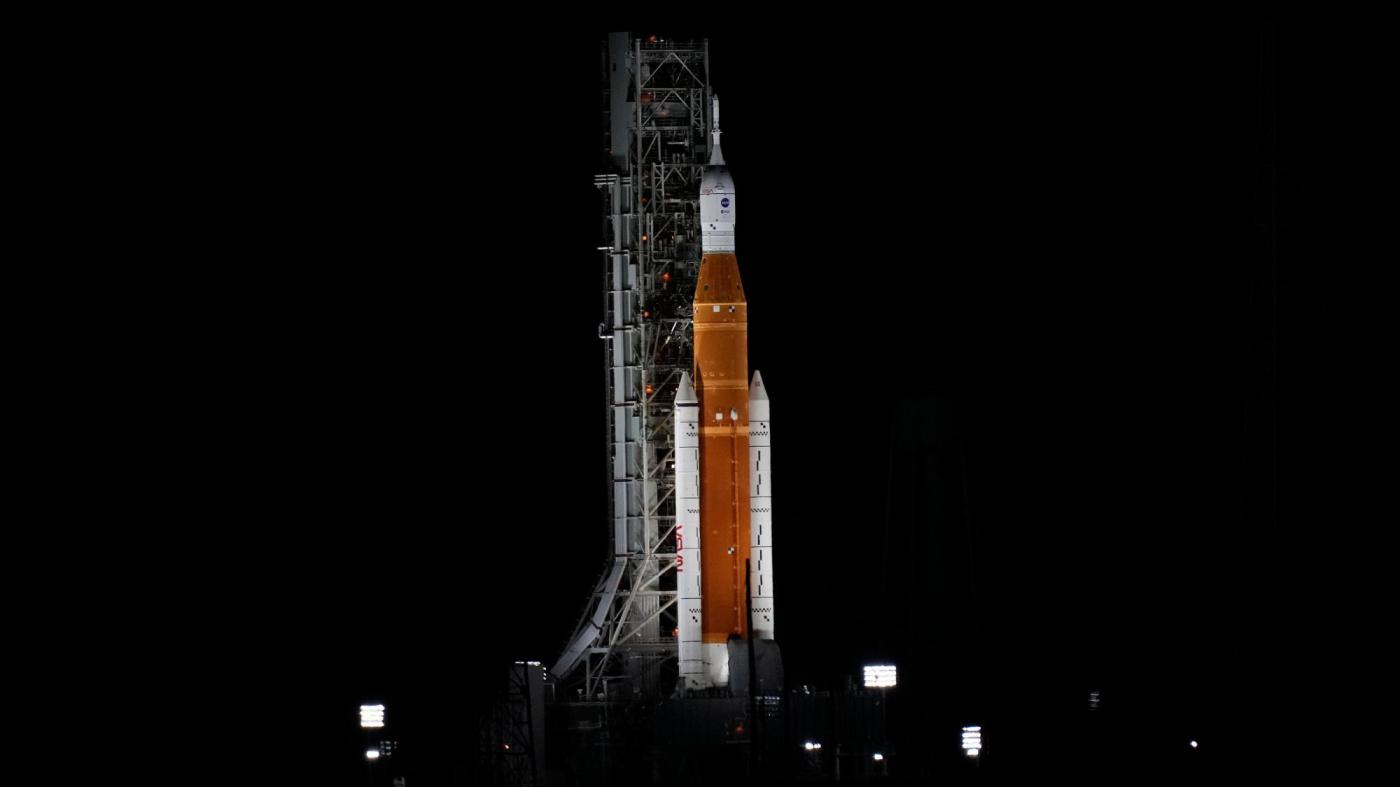 The first attempt earlier in the week was also marred by escaping hydrogen, but those leaks were elsewhere on the 322-foot (98-meter) rocket, the most powerful ever built by NASA.

Launch director Charlie Blackwell-Thompson and her team tried to plug Saturday’s leak the way they did the last time: stopping and restarting the flow of super-cold liquid hydrogen in hopes of removing the gap around a seal in the supply line. They tried that twice, in fact, and also flushed helium through the line. But the leak persisted.

Blackwell-Thompson finally halted the countdown after three to four hours of futile effort.

CAPE CANAVERAL, Fla. (AP) — NASA’s new moon rocket sprang another hazardous leak Saturday, as the launch team began fueling it for liftoff on a test flight that must go well before astronauts climb aboard.

For the second time this week, the launch team began loading nearly 1 million gallons of fuel into the 322-foot (98-meter) rocket, the most powerful ever built by NASA. Monday’s attempt was halted by a bad engine sensor and leaking fuel.

As the sun rose, an over-pressure alarm sounded and the tanking operation was briefly halted, but no damage occurred and the effort resumed. But minutes later, hydrogen fuel began leaking from the engine section at the bottom of the rocket. NASA halted the operation, while engineers scrambled to plug what was believed to be a gap around a seal in the supply line.

The countdown clocks continued ticking toward an afternoon liftoff; NASA had two hours Saturday to get the rocket off.

NASA wants to send the crew capsule atop the rocket around the moon, pushing it to the limit before astronauts get on the next flight. If the five-week demo with test dummies succeeds, astronauts could fly around the moon in 2024 and land on it in 2025. People last walked on the moon 50 years ago.

On Monday, hydrogen fuel escaped from elsewhere in the rocket. Technicians tightened up the fittings over the past week, but launch director Charlie Blackwell-Thompson stressed that she wouldn’t know whether everything was tight until Saturday’s fueling.

Even more of a problem on Monday, a sensor indicated one of the rocket’s four engines was too warm, but engineers later verified it actually was cold enough. The launch team planned to ignore the faulty sensor this time around and rely on other instruments to ensure each main engine was properly chilled.

Before igniting, the main engines need to be as frigid as the liquid hydrogen fuel flowing into them at minus-420 degrees Fahrenheit (minus-250 degrees Celsius). If not, the resulting damage could lead to an abrupt engine shutdown and aborted flight.

Mission managers accepted the additional risk posed by the engine issue as well as a separate problem: cracks in the rocket’s insulating foam. But they acknowledged other problems — like fuel leaks — could prompt yet another delay.

The $4.1 billion test flight is the first step in NASA’s Artemis program of renewed lunar exploration, named after the twin sister of Apollo in Greek mythology.

Twelve astronauts walked on the moon during NASA’s Apollo program, the last time in 1972.

Artemis — years behind schedule and billions over budget — aims to establish a sustained human presence on the moon, with crews eventually spending weeks at a time there. It’s considered a training ground for Mars.

The Associated Press Health and Science Department receives support from the Howard Hughes Medical Institute’s Department of Science Education. The AP is solely responsible for all content.